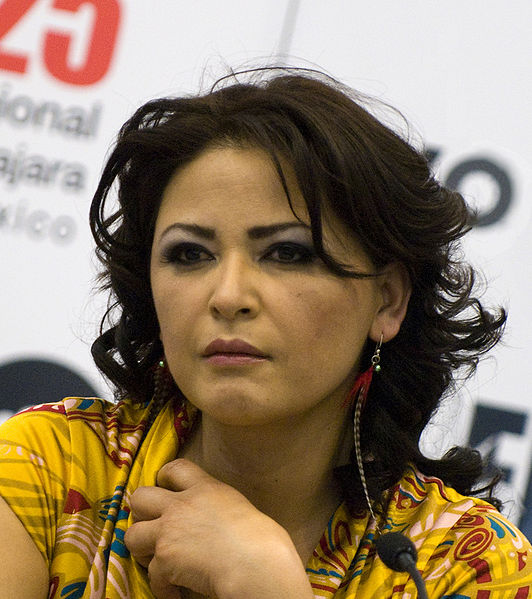 Elpidia Carrillo (born August 16, 1961)[1] is a Mexican and American actress and director. Her career includes roles in both Latin American and US film and television. She is best known in the United States for her supporting role in the iconic action film Predator, Bread and Roses and Nine Lives.[2][3]

She was also nominated for an Independent Spirit Award for Best Female Lead for her performance in Salvador. She also known for the role Tecuichpo in the independent film The Other Conquest.

Carrillo was born in Santa Elena, Michoacán, Mexico, a rural mountain town. One of eight children in a family of farm laborers, her childhood was marked by violence and poverty. At the age of three, her father was murdered, forcing her eldest brother to assume control of the family. Wanting Carrillo to get an education, he forged a birth certificate so she could begin first grade at age four.

When she was six, her brother was also gunned down outside a theater and the family faced constant threats to their lives. When she was ten, Carrillo moved to the town of Uruapan with an older sister where she dropped out of school as she began working alongside her sister at a Chinese restaurant.[4]

Carrillo was discovered by a local photographer in Uruapan, Mexico and soon received a modeling contract. At 12 years old, director Rafael Corkidi cast Elpidia as Malinche in the surrealist Mexican feature film Pafnucio Santo.[5] The film was Mexico's official submission to the Academy Awards that year, but with its many esoteric elements, it failed to garner a nomination. Due to the role involving nudity and her being under age, Carrillo was credited under the fake name Piya. Corkidi cast Carrillo again for a larger role in his film Deseos.

By age 16, she shot her first lead role in the controversial Mexican feature Nuevo Mundo, directed by Gabriel Retes. Having worked numerous films, she decided to enroll in the Bellas Arts School in Mexico City.[6]

After numerous Mexican and International film and television credits, Carrillo's US film career quickly emerged as she did a series of critically acclaimed roles in award nominated US projects.[7][8] Her first US film came when Academy Award winning director Tony Richardson cast her in a co-starring role in the film The Border opposite Jack Nicholson and Harvey Keitel. That was soon followed by a co-starring role in the British drama Beyond the Limit opposite Richard Gere, Michael Caine, and Bob Hoskins, with the latter two British actors receiving BAFTA Nominations for their performances.

For her third US film, Carrillo performed a small supporting role in another successful Academy Award nominated art film Under Fire for which Gene Hackman's performance received a Golden Globe nomination.

Next she made her US television debut in the role of Coana in the Primetime Emmy nominated mini-series Christopher Columbus.

With awards and critical recognition all by the age of 25, Carrillo then accepted what would be one of the most recognizable and commercially successful roles of her career as the female lead and only actress appearing in the iconic 20th Century Fox action film Predator opposite Arnold Schwarzenegger, Carl Weathers, Shane Black, and Jesse Ventura. Her character of Anna is also the only character to recur in more than a single film during the Predator franchise as she would also briefly appear in Predator 2.

Predator is widely considered the most commercially successful film of Carrillo's career and her most recognizable role. Though initially weakly received by critics, the film has subsequently gone on to become an action film classic making numerous "best of" lists in later years.[9][10][11][12] At the time of its release, the film received an Oscar nomination for Best Visual Effects.

Johnny Depp cast her as the female lead of his only directorial effort, the controversial The Brave, which he also starred in along with Marlon Brando. Despite the highly acclaimed cast and Palme d'Or nomination at the 1997 Cannes Film Festival, the dark subject and mixed reception resulted in the film only receiving an international theatrical release.

Despite the critical recognition and various nominations throughout her career, Carrillo's first US acting award win was for her performance as Rosa in the drama Bread and Roses, which was nominated for the Palme d'Or at the 2000 Cannes Film Festival. Carrillo would go on to win the 2002 ALMA Award for Outstanding Supporting Actress in a Motion Picture, but in an improbable twist, she tied with Elizabeth Peña for the award. During the telecast, both women came to the podium together and shared time in giving their acceptance speeches.

Later Carrillo would win the same award four years later, this time as sole recipient of the 2006 ALMA Award for Outstanding Supporting Actress in a Motion Picture for her performance as Sandra in Nine Lives written and directed by Rodrigo García. This was soon followed by a co-starring role in the commercially successful film Seven Pounds which starred Will Smith and went on to earn $165M at the box office.

Rodrigo García would then once again cast Carrillo, this time to co-star in the ensemble drama Mother and Child, this time sharing the screen and not the podium with Elizabeth Peña as well as Annette Bening, with whom she shares the majority of her scenes. The ensemble film also featured her former My Family co-star Jimmy Smits and actors Naomi Watts, Kerry Washington, and Samuel L. Jackson. The film premiered at the 2009 Toronto International Film Festival and Sundance Film Festival.

She returned to star in the Mexican family comedy Familia Gang and the independent features Relentless and Foreign Land.

She made her return to television with a major recurring arc as Linda Brenner on the highly decorated ABC series Nashville and a guest starring role as President Daphne Tejeda on Madam Secretary.

Carrillo staged a number of public demonstrations protesting the massacre of 43 innocent students in Ayozinapa, Mexico in 2014.[citation needed] She also plays an active role in teaching young actors and filmmakers, including lecturing in her native Mexico and worldwide.[citation needed]