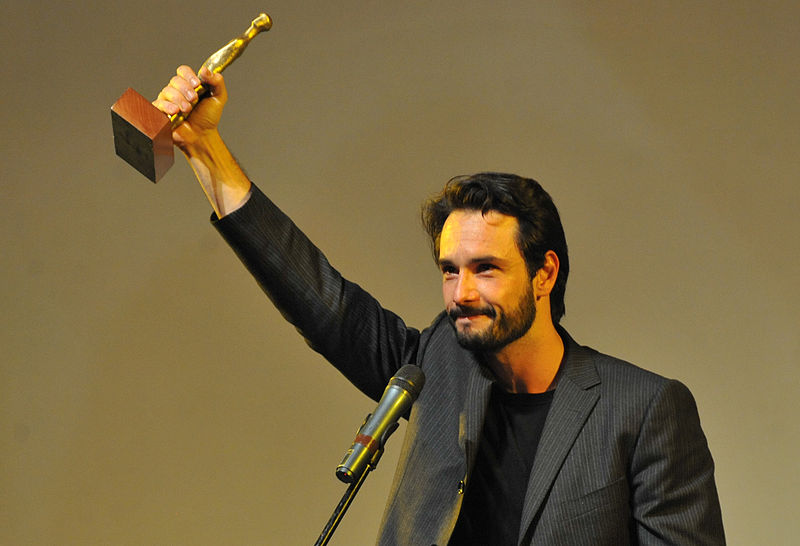 In 1993, as Santoro was studying Journalism at PUC-Rio, he entered the Actor's Workshop of Rede Globo. Santoro went on to play parts in many of Globo's telenovelas, such as Olho no Olho (1993), Pátria Minha (1994), Explode Coração (1995), O Amor Está no Ar (1997), Suave Veneno (1999) and Mulheres Apaixonadas (2003), as well as the miniseries Hilda Furacão (1998), in the role of a priest. Santoro was also the voice actor of the titular character in Stuart Little and its sequel in the Brazilian dubbed copies.

His first major role in a cinema production came in 2001, with Bicho de Sete Cabeças (Brainstorm) by Brazilian director Laís Bodansky. By the end of the film, he received a standing ovation from the audience.[7][8] He also went on to win the festival's best actor trophy. After Bicho, his reputation as an actor had been solidified and he was cast as the male lead in Abril Despedaçado (Behind the Sun), one of the nominees for best foreign film in the 2002 Golden Globe Awards. He had another performance in the 2003 Hector Babenco film Carandiru, where he played a transsexual prisoner known as "Lady Di".

Santoro at the 2013 San Diego Comic-Con International, promoting 300: Rise of an Empire.

Canadian director Robert Allan Ackerman signed Santoro for his TV production The Roman Spring of Mrs. Stone after being mesmerised by his performance in Bicho de Sete Cabeças. Since Santoro did not have an agent in North America, Ackerman contacted Santoro's father. He spent two months filming in Rome, alongside renowned actors such as Helen Mirren and Anne Bancroft. Soon after he finished shooting for Mrs. Stone, he received an offer from Columbia Pictures for a part in the blockbuster Charlie's Angels: Full Throttle. His performance in Charlie's Angels kick-started his career in Hollywood. After Charlie's Angels, he played the character of Karl, the enigmatic chief designer and love interest of Laura Linney's character, in the romantic comedy Love Actually, which also features Colin Firth, Lucia Moniz, Hugh Grant, Emma Thompson, Keira Knightley, and Rowan Atkinson.

He also started getting work in the advertising business as he appeared in a commercial campaign with Gisele Bündchen in 2002. He played the male lead in No. 5 The Film, the 3-minute-long commercial for Chanel, directed by Baz Luhrmann alongside Nicole Kidman in 2004.

In 2006, Santoro joined the cast of Lost as survivor of Oceanic Flight 815, Paulo. His first appearance was in episode titled, "Further Instructions". His character was killed off in the episode "Exposé". He also voices his character Paulo in the Portuguese dub for Brazil.

Santoro was cast as Persian emperor Xerxes in the film 300, based on the Frank Miller comic of the same name, in 2006. The role had many special requirements, such as intensive workout for the physicality of the role (Santoro had lost 24 pounds to work in a Brazilian miniseries), extensive CG work to portray the 6'2" Santoro as the 7-foot God-King, a four-and-a-half-hour makeup application process and the complete removal of Santoro's body hair first by waxing and then by shaving when that proved too painful.[9] His eyebrows were kept intact, however, covered over with prosthetics and drawn in rather than being shaved.[10] Santoro read the works of Herodotus, an Ancient Greek historian, in order to prepare for his part. Regarding Xerxes, he has stated:

He's rich, he's arrogant, he's a very unstable megalomaniac. He just wants to conquer the world. His ambition is unlimited. He wants glory; he wants victory; he wants eternal fame. Underneath all that wanting, though, he's ultimately weak and very insecure.[9]

For his role on 300, Santoro became the first Brazilian actor nominated to the MTV Movie Awards in the category of Best Villain. He did not win however, and the award went to Jack Nicholson for The Departed.

He plays the late footballer Heleno de Freitas in the 2012 film Heleno.[11] Santoro co-starred alongside Arnold Schwarzenegger in the 2013 film The Last Stand. Santoro played Garriga in the Will Smith drama film Focus (2015).

Santoro plays Jesus in the 2016 historical action film Ben-Hur and received personal blessings from Pope Francis for this role.[12]

Santoro has been in a relationship with Brazilian actress Mel Fronckowiak since 2013. On May 22, 2017, they welcomed their first child, a daughter named Nina. [13]

Santoro at the premiere of What to Expect When You're Expecting, 9 May 2012, New York

Santoro holding the statue he won at the 44th Festival de Brasília for the movie Meu País, in 2011.

Other nominations and honors