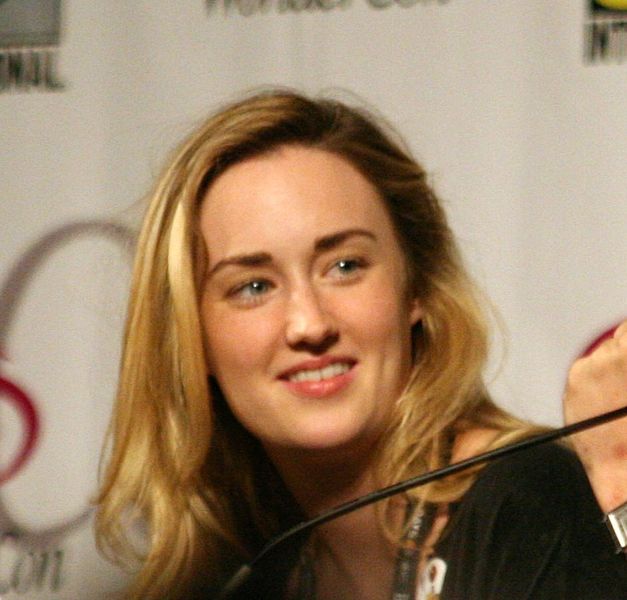 Ashley Suzanne Johnson (born August 9, 1983)[1] is an American actress, voice actress and singer. She is best known for her roles as Chrissie Seaver in Growing Pains, Ellie in The Last of Us, Annie Warbucks in Annie: A Royal Adventure!, Alex Marshall in What Women Want, Terra in Teen Titans and its spin-off Teen Titans Go!, Gwen Tennyson in the Ben 10 franchise and Gretchen Priscilla Grundler in Disney's Recess. She currently stars in the NBC drama Blindspot as FBI forensic specialist Patterson, and is a recurring cast member of Geek and Sundry's show Critical Role.

Johnson was born in Camarillo, California, the youngest child of Nancy Spruiell Johnson, an independent film producer, and Clifford Johnson, the captain of an exploration ship. Her father died in July 2000 from Hepatitis C and cancer.[2] She is of Norwegian,[3] Swedish, Danish, Irish, Scottish, and Native American descent. When she was nine days old, her father got a new job and the family moved to Franklin, Michigan. Johnson graduated from high school at 15.[citation needed]
Read more...

Johnson's career began at age six, when she played the role of Chrissy Seaver on the sitcom Growing Pains from 1990 to 1992. The character's age was accelerated from a toddler between seasons for plotting purposes. By the time she was 12, Johnson had been in the casts of eight TV series. She later reprised her role as Chrissy in The Growing Pains Movie and Growing Pains: Return of the Seavers. In the one season series Phenom (1993-94), she played the mischievous younger sister of a rising teenage tennis star. Johnson appeared in the 1994 sitcom All-American Girl, which also lasted for only one season. She played DJ's overbearing girlfriend Lisa in the 1995 Roseanne episode "The Blaming of the Shrew", and played Alex Marshall, the daughter of Mel Gibson's character, in the 2000 comedy What Women Want. In 2008, she became a regular on the drama Dirt as Sharlee Cates. In 2009, Johnson appeared in "Omega", the season one finale of Joss Whedon's Dollhouse.[citation needed]

In 2012, she appeared in The Avengers (also directed by Whedon) as a waitress who is saved by Captain America (Chris Evans). She was intended to appear in future Captain America films as his newest love interest (given that a brief scene in the film was implied), but that plan was shelved and instead, actress Emily VanCamp took over as Sharon Carter for the next two films. Although her role was minor, the Blu-ray edition of The Avengers contains some deleted scenes that expand her role in the movie and further her interactions with Captain America.[4][5]

As a voice actress, she played Sean on the cartoon movie The First Snow of Winter in the US version in 1998, Gretchen Grundler on the Walt Disney TV animated series Recess, Terra in the Teen Titans animated series during the show's second and fifth season, Jinmay on Super Robot Monkey Team Hyperforce Go! and Gwen Tennyson on Ben 10: Alien Force and in future variations of the Ben 10 franchise. Four of her roles have love interests who are voiced by Greg Cipes (Chiro in Super Robot Monkey Team Hyperforce Go!, Kevin in Ben 10, Beast Boy in Teen Titans, and Michelangelo in Teenage Mutant Ninja Turtles).

She co-starred in the PlayStation exclusive The Last of Us as the character Ellie, which was released to critical acclaim and commercial success.[6] She subsequently won a video game BAFTA for Best Performer and a VGX Award for Best Voice Actress for her role in the game. On March 12, 2015, Johnson won another BAFTA for Best Performer for the same role in the game's downloadable content, The Last of Us: Left Behind.[7]

Johnson appears in several Geek & Sundry shows, including playing occult specialist Morgan on the web series Spooked on Hulu, playing Alhambra and Dead of Winter on the board gaming web series TableTop,[8][9] and playing Pike Trickfoot/Yasha in the Geek and Sundry series Critical Role.[10]

As of 2015, she plays FBI forensic specialist Patterson in the NBC drama series Blindspot.[11] In 2015, Ashley Johnson was the voice actress of a main character in Minecraft: Storymode by TellTale and Mojang, Petra the Warrior.

Johnson studied violin and piano at the International School of Music; she also plays guitar and cello. When not acting or studying music, Johnson co-runs the photography company Infinity Pictures with her friend, production assistant Mila Shah.[12]

Johnson's older brother Chris worked on the television show The District. Her older sister Haylie Johnson is best known for her role as Haylie on Kids Incorporated. Haylie is married to Jonny Lang.[13]

Johnson has been in a relationship since 2012 with Brian Wayne Foster, an American writer, poet and singer.[14][15]

Report a problem
Write to Ashley Johnson at FanPal • 2022