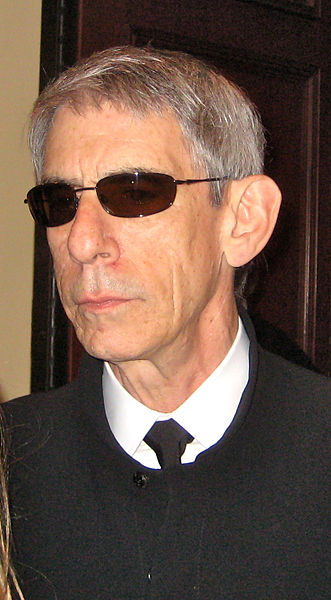 Richard Jay Belzer (born August 4, 1944)[1] is an American stand-up comedian, author,[2] and actor. He is best known for his role as BPD Detective, NYPD Detective/Sergeant and DA Investigator John Munch,[3] whom he has portrayed as a regular cast member on the NBC police drama series Homicide: Life on the Street[4] and Law & Order: Special Victims Unit,[3] as well as in guest appearances on a number of other series. He portrayed the character for 23 years from 1993 to 2016.

Belzer was born in Bridgeport, Connecticut, the son of Frances and Charles Belzer, a tobacco and candy retailer.[1] He grew up in a Jewish[5] family. He described his mother as frequently physically abusive, and declared that his comedy career began when trying to make his mother laugh in order to distract her from abusing him and his brother.[6] After graduating from Fairfield Warde High School, Belzer worked as a reporter for the Bridgeport Post.

Belzer attended Dean College, which was then known as Dean Junior College, in Franklin, Massachusetts, but was expelled.[7] He worked at a variety of jobs, including sales and as a census taker.

After his first divorce, Belzer relocated to New York City, moved in with singer Shelley Ackerman, and began working as a stand-up comic at Pips, The Improv, and Catch a Rising Star. He participated in the Channel One comedy group that satirized television and became the basis for the cult movie The Groove Tube, in which Belzer played the costar of the ersatz TV show "The Dealers."[8]

Belzer was the audience warm-up comedian for Saturday Night Live[9] and made three guest appearances on the show between 1975 and 1980.[10] He also opened for musician Warren Zevon during his tour supporting the release of his album Excitable Boy.[citation needed]

In the late 1970s and early 1980s, Belzer became an occasional film actor. He is noted for small roles in Fame, Café Flesh, Night Shift, and Scarface. He appeared in the music videos for the Mike + The Mechanics song "Taken In" and for the Pat Benatar song "Le Bel Age", as well as the Kansas video "Can't Cry Anymore". He appeared in A Very Brady Sequel as an LAPD detective.

In addition to his film career, Belzer was a featured player on the National Lampoon Radio Hour with co-stars John Belushi, Chevy Chase, Bill Murray, Gilda Radner, and Harold Ramis, a half-hour comedy program aired on 600 plus U.S. stations from 1973 to 1975.[11] Several of his sketches were released on National Lampoon albums, drawn from the Radio Hour, including several bits in which he portrayed a pithy call-in talk show host named "Dick Ballentine".

Following the departure of Randi Rhodes from Air America Radio, Belzer guest-hosted the afternoon program on the network.[13]

In the 1990s, Belzer appeared frequently on television. He was a regular on The Flash as a news anchor and reporter. In several episodes of Lois & Clark: The New Adventures of Superman, he played Inspector William Henderson.

He followed that with starring roles on the Baltimore-based Homicide: Life on the Street (1993-99) and the New York-based Law & Order: Special Victims Unit (1999-2013), portraying police detective John Munch in both series.[4] Barry Levinson, executive director of Homicide, said Belzer was a "lousy actor" in audition when he read lines from the script for "Gone for Goode", the first episode in the series.[14] Levinson asked Belzer to take time to reread and practice the material, then read it again. At his second reading, Levinson said Belzer was "still terrible", but that the actor eventually found confidence in his performance.[15]

In addition, Belzer has played Munch in episodes on seven other series and in a sketch on one talk show, making Munch the only fictional character to appear on eleven different television shows played by a single actor[citation needed]. These shows were on six different networks:

Belzer portrayed Det. Munch for 22 consecutive seasons on Homicide (7 seasons) and Law & Order: SVU (15 seasons), which exceeded the previous primetime live-action record of twenty consecutive seasons held by James Arness (who portrayed Marshal Matt Dillon on Gunsmoke from 1955 to 1975) and Kelsey Grammer (as Dr. Frasier Crane on Cheers and Frasier from 1984 to 2004).

Belzer appeared in several of Comedy Central's televised broadcasts of Friars Club roasts. On June 9, 2001, Belzer himself was honored by the New York Friars Club and the Toyota Comedy Festival as the honoree of the first-ever roast open to the public. Comedians and friends on the dais included Roastmaster Paul Shaffer; Christopher Walken; Danny Aiello; Barry Levinson; Robert Klein; Bill Maher; SVU costars Mariska Hargitay, Christopher Meloni, Ice-T, and Dann Florek; and Law & Order's Jerry Orbach. At the December 1, 2002, roast of Chevy Chase, Belzer said, "The only time Chevy Chase has a funny bone in his body is when I fuck him in the ass." [19]

Belzer voiced the character of Loogie for most of the episode of South Park titled "The Tooth Fairy Tats 2000".[citation needed] He and Brian Doyle-Murray were featured in the tenth-season premiere of Sesame Street.[citation needed]

Belzer believes there was a conspiracy to assassinate President John F. Kennedy[20] and has written four books discussing conspiracy theories: UFOs, JFK, and Elvis: Conspiracies You Don’t Have to Be Crazy to Believe; Dead Wrong: Straight Facts on the Country’s Most Controversial Cover-Ups; Hit List: An In-Depth Investigation into the Mysterious Deaths of Witnesses to the JFK Assassination; and Someone Is Hiding Something: What Happened to Malaysia Airlines Flight 370?[21] Dead Wrong and Hit List were written with journalist David Wayne and reached The New York Times Best Seller list.[21] Someone Is Hiding Something was also written with David Wayne as well as radio talk show host George Noory. Belzer's long-time character, John Munch, also is a believer in conspiracy theories, including the JFK assassination.

Belzer's first two marriages were to Gail Susan Ross (1966-72)[22] and boutique manager Dalia Danoch (1976 - c. 1978),[22] both of which ended in divorce. In 1981 in Los Angeles he met 31-year-old Harlee McBride, a divorcee with two daughters,[23] Bree Benton and Jessica.[24] McBride, who had been seen in Playboy magazine four years earlier in that year's sex-in-cinema feature, in conjunction with Young Lady Chatterley,[25] was appearing in TV commercials for Ford motors and acting in free theater, when she met Belzer at the suggestion of a friend.[23] The two married in 1985.[22]

Belzer survived testicular cancer in 1983.[23] His HBO special and comedy CD Another Lone Nut pokes fun at this medical incident as well as his status as a well-known conspiracy theorist.

On March 27, 1985, days prior to the inaugural WrestleMania, Belzer requested on his cable TV talk show Hot Properties that Hulk Hogan demonstrate one of his signature wrestling moves. After being asked by Belzer several times, Hogan put Belzer in a front chin-lock, which caused Belzer to pass out.[26] When Hogan released him, Belzer hit his head on the floor, sustaining a laceration to the scalp that required a brief hospitalization.[27] Belzer sued Hogan for $5 million and settled out of court. On October 20, 2006, on Bubba the Love Sponge, it was claimed[by whom?] (with Hogan in the studio) that the settlement totaled $5 million, half from Hogan and half from wrestling promoter Vince McMahon. During his June 23, 2008, appearance on Sirius Satellite Radio's The Howard Stern Show, Belzer suggested that the settlement amount was closer to $400,000.[28][not in citation given] He used the incident in his HBO special Another Lone Nut in his stand-up routine.

Belzer is a cousin of actor Henry Winkler.[29]