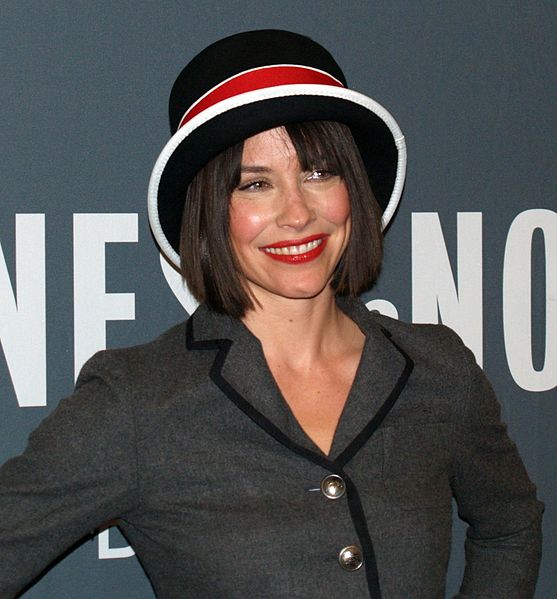 Nicole Evangeline Lilly (born August 3, 1979)[1][2] is a Canadian actress who came to prominence for her starring role as Kate Austen in the ABC series Lost (2004-10), for which she won a Screen Actors Guild Award and received a Golden Globe Award nomination.[3] She is also known for her roles as Connie James in The Hurt Locker (2008), Bailey Tallet in Real Steel (2011), and Tauriel in The Hobbit film series (2012-14).

In the Marvel Cinematic Universe, she starred as the superhero Hope van Dyne / Wasp in the films Ant-Man (2015) and Ant-Man and the Wasp (2018). She will reprise her role alongside Paul Rudd in the upcoming Avengers 4 (2019).

Lilly was born in Fort Saskatchewan in Alberta. She was raised in British Columbia by her mother and her father, a produce manager. She has both an older sister and a younger sister. [1][4][5]

Lilly graduated from W. J. Mouat Secondary School in Abbotsford, British Columbia, where she played soccer and was vice-president of the student council.[6] While in college, she worked as a waitress, did "oil changes and grease jobs on big rig trucks", and worked as a flight attendant for Royal Airlines to pay for her tuition.[6][7][8] She grew up Christian and her faith influenced her decision to take part in a three-week mission trip to the Philippines when she was 18.[7][9] Her interest in humanitarian causes and global development led her to major in International Relations at the University of British Columbia.[10]

Lilly's acting career began when she was discovered by a Ford Modeling Agency agent while walking the streets of Kelowna, British Columbia.[11] She took the agent's business card but did not immediately pursue acting. She eventually called and the agency landed her several roles in commercials and non-speaking parts in the TV shows Smallville and Kingdom Hospital.[10][12][13]

Lilly was encouraged to audition for ABC's Lost by a friend and she did not expect to get cast. As the secrecy campaign prevented the auditioning actors from accessing the full script, forcing them to read short scenes and only know the basic premise of people surviving a plane crash on a tropical island - which reminded Lilly of The Blue Lagoon - she thought Lost would "at best be a mediocre TV show".[14] Around 75 women auditioned for the part of Kate Austen. Writer and co-creator Damon Lindelof said that he and executive producer and co-creator J. J. Abrams "were fast-forwarding through a tape, and he saw her and said, 'That's the girl.'"[15][16] The character almost had to be recast, as Lilly had trouble acquiring a work visa to enter the United States.[17] Her application was finally accepted after nearly 20 tries and she arrived in Hawaii for filming one day late.[17]

Lost ran for six seasons from 2004 to 2010.[18] It was one of the top shows on ABC's primetime schedule during its run, winning one Golden Globe Award and ten Primetime Emmy Awards, including Outstanding Drama Series in 2005, and was ranked the top-rated TV show of the decade by IMDb.[19] Lilly appeared in 108 of the show's 121 episodes, and her character, Kate Austen, was the show's female lead. Entertainment Weekly voted Lilly one of its "Breakout Stars of 2004."[20] In 2006, she was nominated for a Golden Globe Award for Best Actress - Television Series Drama.[21] Robert Bianco of USA Today praised Lilly's performance in the episode "Eggtown", saying that it was almost worthy of a Primetime Emmy Award for Outstanding Lead Actress in a Drama Series nomination.[22] In 2007, Lilly's portrayal was voted #1 Sexiest Woman on Television by TV Guide and made FHM's Top Sexiest.[23] Evangeline was voted one of People Magazine's '50 Most Beautiful People'. After shooting the final episode of Lost, Lilly said she was considering taking a break from acting to focus on her charity and humanitarian efforts.[24] She told Vulture, "I consider acting a day job — it's not my dream; it's not my be-all, end-all."[25] She says she uses her high-profile roles to further her humanitarian efforts, not to achieve stardom.[26]

In 2008, Lilly appeared in the Academy Award-winning film The Hurt Locker.[27] She and the rest of the cast won the Gotham Award for Best Ensemble Cast and the Washington D.C. Area Film Critics Association Award for Best Ensemble. Lilly followed this role with a leading part in psychological thriller film Afterwards.[28] In 2010, Lilly stated her intention to focus on children's book writing[29] and on feature film roles.[30][31]

On May 11, 2010, Lilly announced on The View that she places writing and being a mother as top priorities, but she likes acting as a day job and she will continue acting when possible.[32] Lilly took short retirement and was not in contact with hollywood at all.[33] In 2011, she appeared as Bailey Tallet in Real Steel.[34] Despite having turned down a number of film offers, she traveled to Los Angeles to get the part after director Shawn Levy sent her the script.[35] Levy said: "She's magnificent to look at, she's soulful, and she's sexy. I needed someone who you believed had grown up in a man's world. Bailey needed to have a strength and a toughness that was not at the expense of her being womanly."[36]

In 2012, Lilly was cast as the Mirkwood elf Tauriel in Peter Jackson's three-part adaptation of J. R. R. Tolkien's The Hobbit.[37][38] The character, which does not appear in the original book by Tolkien, was created by Peter Jackson and Fran Walsh as the head of the Elven guard who wields a bow and two daggers as weapons. Lilly, who had been a fan of Tolkien's books since she was 13,[39] underwent training for swordplay and archery, as well as in the Elvish language for the role.[39][40] In 2015, Lilly played Hope van Dyne / Wasp in the superhero film Ant-Man,[41][42] and later reprised her role in the sequel, Ant-Man and the Wasp (2018), Marvel's first movie to feature a female hero in the title.[43] Lilly will return alongside Paul Rudd in Avengers 4 (2019).

Lilly holding a copy of her children's book, The Squickerwonkers, at the San Diego Comic-Con in 2013

In June 2010, Lilly announced on The Late Late Show with Craig Ferguson that she would be writing a children's book and recited several excerpts.[44] Her literary inspirations are children books authors like Roald Dahl and Edward Gorey.[45]

On July 18, 2013, Lilly debuted the book, titled The Squickerwonkers. The release event was held at the San Diego Comic-Con, where she attended a book signing for the work in addition to providing a reading performance. Lilly has stated that the idea for the book first came to her when she was 14 years old. The foreword to the book was written by director Peter Jackson. She described the work as "a graphic book series designed for children", stating that the book is about a young girl who joins a group of characters she described as "this family, the Squickerwonkers, and they're strange outcasts who all have very particular vices".

Lilly has stated that future books will each reveal a new Squickerwonker character and unique vice, which will eventually become the undoing of the character.[46] The illustrator for the book is Johnny Fraser-Allen of Weta Workshop, a New Zealand-based concept design firm that worked on films including The Hobbit. Lilly stated that the goal was to "make a book that we would like to have read as children and that we would still enjoy as adults today".[47]

On December 20, 2006, an electrical problem set fire to her house in Kailua, Hawaii, destroying the house and all of her possessions while she was on the set of Lost.[48] Though she lost all of her belongings, she said that the fire "was almost liberating, I'm in no hurry to clutter up my life again".[49]

She works with non-profits such as the GO Campaign.[24] In 2009, Lilly auctioned off custom lingerie in support of Task Brasil, "a non-profit organization dedicated to helping the lost street children of Brazil by providing them secure housing".[55] In 2010, she auctioned off three lunches in Vancouver, Honolulu, and Los Angeles to help widows and orphans in Rwanda, a country she has made numerous trips to as part of her charity work.[56] Afterwards, in 2012, Lilly auctioned off a Hawaiian hike to raise money for the Sierra Club.[57]

Report a problem
Write to Evangeline Lilly at FanPal • 2022