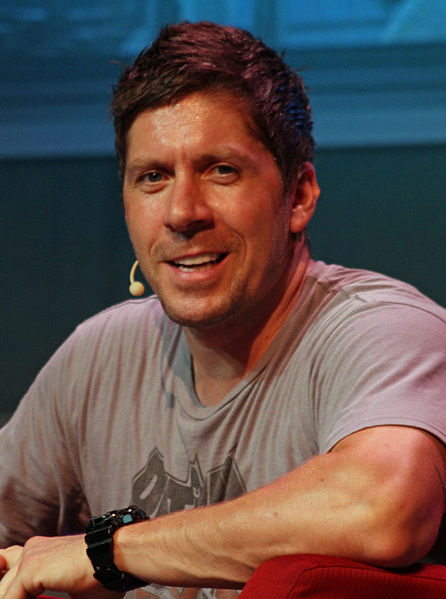 Raymond "Ray" Park (born 23 August 1974) is a Scottish actor, author and martial artist. He is best known for playing Darth Maul in Star Wars: Episode I - The Phantom Menace and Solo: A Star Wars Story,[1] Toad in X-Men, Snake-Eyes in G.I. Joe: The Rise of Cobra[2][3] and G.I. Joe: Retaliation, and Edgar on Heroes.[4]

Ray Park was born in Glasgow, Scotland. At the age of seven, he moved with his family to London, England.[5]

Park was introduced to martial arts by his father, who was a fan of Bruce Lee, and began training in the traditional Chinese Northern Shaolin Kung Fu when he was seven years old. He added wushu to his hobbies by age 14. When he was 16, Park won Great Britain's Martial Arts National Championship for his class[citation needed] and then went to Malaysia to try to improve his skills. He went on to compete in martial arts tournaments around the world and won awards before turning his attention to acting in the late 1990s.[6][unreliable source?]

Park began working in films as a stunt double for the film Mortal Kombat: Annihilation, doing the stunts for both Robin Shou and James Remar. Park also did some cameos as monsters, including Baraka. All of these were non-speaking roles.[7]

In 1999, Park appeared in Star Wars: Episode I - The Phantom Menace, as the Sith Lord Darth Maul. While the character had few lines, Park's voice was dubbed over with that of actor Peter Serafinowicz. From his work on Star Wars, Park was cast in a cameo role in Fanboys as a Skywalker Ranch security guard who says, "Time for you to get mauled, boy," as he pulls out two nightsticks.

In addition to this acting work, he has also been Christopher Walken's fight stunt double for the film Sleepy Hollow. Park appeared in the scene where Walken's character, the Headless Horseman, murders the Killian family and Brom Bones, among others.[8]

Park had his first real speaking part in X-Men as Toad.

In December 2007, Park was confirmed for the role of Snake-Eyes in G.I. Joe: The Rise of Cobra and G.I. Joe: Retaliation involving a variation of the international G.I. Joe force who fought the minions of Cobra in the comics.

ComiCon 2007 saw the premiere of the teaser trailer for Descendants, another comic book adaptation based on an independent comic by writer Joey Andrade.[9]

Park appeared as Edgar in the fourth season of the television series Heroes.[episode needed]

Park was also included in the motion capture team of the 2008 James Bond video game adaptation of Quantum of Solace.

In the comic book-styled film Hellbinders, he plays a soulless mercenary who, along with an elite assassin (Johnny Yong Bosch) and the last remaining member of the long dead Knights Templar, Esteban Cueto, must overcome their innate mistrust of each other and join forces to defeat Legion before it opens the gates of hell itself and overruns the entire world. Park narrated on 26 February 2010 the introduction of The FireBreather, a car from Classic Design Concepts in Detroit Autorama 2010, which appears in Park's supernatural thriller Jinn.[10]

In 2011, Park guest starred in the TV series Nikita as the London Guardian, Brendan. He reprised his role in Solo: A Star Wars Story (2018), as Darth Maul with Sam Witwer providing the voice.[11]

Report a problem
Write to Ray Park at FanPal • 2022