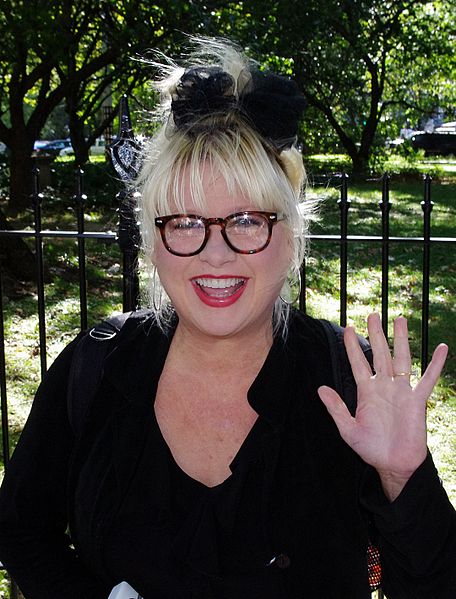 Victoria Jackson (born August 2, 1959) is an American actress, comedian, and singer known for being a cast member of the NBC television sketch comedy series Saturday Night Live (SNL) from 1986 to 1992. From 2008 to 2017, Jackson was politically active as part of the Tea Party movement. White Hall publishing, part of the Liberty Alliance, published Jackson's autobiography, Is My Bow Too Big? How I went from Saturday Night Live to the Tea Party in 2012.

Jackson was born in Miami, Florida, the daughter of Marlene Esther (née Blackstad) and James McCaslin Jackson, a gym coach. From the age of 5 until she was 18, Jackson's father trained her in gymnastics.

Following high school graduation, Jackson attended Florida Bible College in Hollywood, Florida, later transferring to Furman University in Greenville, South Carolina on a gymnastics scholarship. At Furman, she was cast in her first play. She transferred to Auburn University in 1979 for her senior year, changing her major to theater. Midway through her senior year, she left Auburn to pursue an acting career.

In the 2000s, Jackson earned a degree in theatre from Palm Beach Atlantic University.

While doing summer stock theater in Alabama, Jackson met former child-actor Johnny Crawford of the 1950s television series, The Rifleman, who cast her in his nightclub act. She moved to Los Angeles in 1981, working various day jobs while performing comedy at night. Her first big break was her appearance on The Tonight Show Starring Johnny Carson, where she performed doing a handstand while reciting poetry. She would go on to appear on the show twenty times.

Following a role in the short-lived 1985 television series Half Nelson, Jackson received an offer to audition for the cast of Saturday Night Live. Because she was not confident her audition had gone well, on her next appearance on the Tonight Show she performed several impersonations and sent the tape to SNL's Lorne Michaels. After viewing the tape, Michaels asked Jackson to join the show. A regular cast member from 1986 to 1992, Jackson often appeared on the show's weekly Weekend Update segment as a correspondent who would go off-topic, reciting poetry and doing back-bends or handstands on the desk Jackson was also known for her recurring skit roles where she would impersonate Roseanne Barr or Zsa Zsa Gabor. She was one of few women on the show.

During her tenure on SNL, Jackson was cast in a number of films including Baby Boom, Family Business, and I Love You to Death as well as UHF, The Pick-up Artist, 'The Couch Trip, and Casual Sex?

Jackson's film career continued following her 1992 departure from Saturday Night Live, however her roles were in mostly unknown or unnoticed films. On television, she was cast as the lead of her own sitcom co-starring George Clooney. When there was a change in management at Fox, the show was scrapped without being broadcast. In 1994 she appeared as "Beverly" in the In the Heat of the Night episode, "Good Cop, Bad Cop", and in 2000 she appeared as the unrequited love of a small-town man who can control the weather in The X-Files episode, "The Rain King" "The Rain King".

During the 2003-2004 seasons, Jackson had a regular role in the Nickelodeon show Romeo!. In 2004 and 2005 she had roles in two romantic comedies, "Shut Up and Kiss Me!" and "Her Minor Thing". During this period, Jackson appeared on the game show "Hollywood Squares," and participated in the show, Celebrity Fit Club. She played multiple characters in the 2014 direct-to-video movie, Campin' Buddies.

In 2016, Jackson had a role in The Matchbreaker.

A self-described conservative Christian, Jackson has appeared in productions such as the 2007 Christian comedy concert Thou Shalt Laugh 2: The Deuce; as well as a dozen times on Politically Incorrect with Bill Maher as the "token religious conservative". Jackson has given support to the Tea Party through appearances at events as well as her website which was affiliated with the Liberty Alliance.

In October 2008, she appeared with other celebrities on The O'Reilly Factor in a National Republican Senatorial Committee advertisement poking fun at then-future Senator Al Franken, a fellow Saturday Night Live alumnus.

Beginning in 2008, Jackson stated that she believed Barack Obama to be a communist. In 2015, she spread conspiracy theories about Obama's religion, stating he was an "Islamic jihadist" who supported the Islamic State, that he had Muslim Brotherhood members in his cabinet, and that Obama's support for legal abortion and same-sex marriage showed he was not a Christian.

In 2011, Jackson wrote that she thought she was being spied on because of her conservative views. Jackson criticized the TV show Glee for showing a kiss between two male actors, citing the Bible as the source of her criticism. When accused of being homophobic, Jackson countered that the label was merely a "cute liberal buzzword", and suggested that Glee should be replaced with a show promoting celibacy instead.

In 2011, Jackson joined the staff of Patriot Update as a writer and video blogger and host of the talk show, Politichicks. Co-hosts included Ann-Marie Murrrell, Jannique Stewart, and Jennie Jones. Jackson wrote a satirical song for "Politichicks" titled "Shariah Law" with the song's lyrics claiming, "They like beheadings and pedophile weddings". Among her work for Patriot Update was a piece on Occupy Wall Street that was critical of the protesters.

In 2012, White Hall publishers, part of the Liberty Alliance, released Jackson's autobiography, Is My Bow Too Big? How I went from Saturday Night Live to the Tea Party.

In 2012 after Todd Akin's remarks regarding pregnancies resulting from rape, Jackson was quoted as saying, "If I got raped, I would have the baby. And if I didn't want to keep it because I had these horrible nightmares, I would adopt it out. But I think that God can turn a bad thing into a good thing. And that, if I got raped and a beautiful baby who was innocent was born out of it, that would be a blessing."

In 2014, Jackson filed a petition as an independent candidate for one of two District 2 seats in Williamson County, Tennessee. Jackson's run resulted in 632 votes, not enough to secure either seat against the incumbent candidates.

In 2017, Jackson explained why she dropped out of politics.

She married a fellow performer, a fire-eater, in 1984, and had a daughter with him; they divorced in 1991. Shortly after her divorce, Jackson reconnected with her high school sweetheart, then a Miami-Dade SWAT-team police officer. When her husband retired in 2013, the couple moved to Nashville, Tennessee.