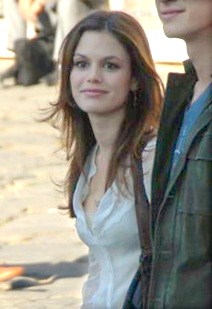 Rachel Sarah Bilson (born August 25, 1981)[1] is an American actress. Born to a California show business family, Bilson made her television debut in 2003, and then landed the role of Summer Roberts on the prime-time drama series The O.C. Bilson made her movie debut in The Last Kiss (2006) and starred in the science-fiction-action film Jumper (2008). From 2011 to 2015, she starred as Dr. Zoe Hart on The CW series Hart of Dixie.

Bilson was born in Los Angeles,[1] the daughter of Janice Stango, a sex therapist,[2][3] and Danny Bilson, a writer, director, and producer.[1] She has an older brother[4] and two younger[5] half-sisters, Rosemary and Hattie.[6] Her father is Jewish; her mother is Italian-American.[7]

Bilson attended Grossmont College, a community college in a suburb of San Diego, but dropped out after one year,[9] taking her father's advice to pursue a professional acting career.[8] She then made several appearances in commercials, including advertisements for Subway restaurants, Raisin Bran and Pepto-Bismol.[8]

She made her screen acting debut in early 2003, appearing in one episode of Buffy the Vampire Slayer and 8 Simple Rules for Dating My Teenage Daughter. Bilson was subsequently cast in The O.C., which debuted in August 2003. Her character, Summer Roberts, was initially intended to appear in only a few episodes, but became a series regular after a successful run, as Bilson's on-screen romance with Seth Cohen (Adam Brody) became a noted aspect of the series.[9]

The UK edition of FHM Magazine named her 28th in the 2006 100 Sexiest Women in the World list,[13] while the US Edition Ranked her 77th in 2005.[14] Bilson was also named one of People magazine's "100 Most Beautiful People" in 2006.[15] Before appearing in Maxim, Bilson had turned down requests to appear seminude in men's magazines, specifying that she feels that her body "is sacred" and "not there for the whole world to see."[16]

Bilson's first film role was in The Last Kiss, a romantic comedy-drama also starring Zach Braff in 2006. She played a college student who seduces Braff's character. It was reported that she called for a body double during the sex scenes because she was uncomfortable being nude in front of the camera. One review of the film noted that Bilson played the role with "surprising depth",[17] although another critic described her role as "Glenn Close in Fatal Attraction as an airhead valley girl with a hot bod".[18]

In September 2006, Bilson refuted rumors she had been cast to star in a film version of the comic book character Wonder Woman.[19]

In late 2006, Bilson was cast in the film Doug Liman's thriller Jumper, as the replacement for actress Teresa Palmer; the film was released on February 14, 2008.[20] She appeared in a two-episode arc on The O.C. creator Josh Schwartz's NBC comedy, Chuck,[21] and in the film New York, I Love You. She appeared in the 100th episode of How I Met Your Mother ("Girls Versus Suits") as Ted Mosby's latest love interest.[22]

In September 2008, she started shooting the indie romantic film Waiting for Forever, directed by James Keach. In September 2009 Rachel appeared as a celebrity guest judge in the third episode of Project Runway (season 6). Bilson starred in the 2011 indie film L!fe Happens. In 2011, Bilson began starring in The CW series Hart of Dixie, executive produced by The O.C. creator Josh Schwartz. On May 7, 2015, the CW officially canceled the show after four seasons.[23] In 2017, Bilson joined the cast of CMT's Nashville which reunites her with her former The O.C. co-star Chris Carmack.[24]

In November 2017, it was announced that Bilson will be starring in the upcoming ABC drama series Take Two. The show was given a straight-to-series order and premiered in June 2018.[25][26]

Bilson has been recognized by several media sources as being a "fashion junkie".[27][28][29] She has described herself as having a "vintage" sense of style, and has noted Kate Moss and Diane Keaton as inspirations.[29]

Bilson approached DKNY Jeans in late 2007 with a view to design a clothing line with the fashion brand.[30] Together they created Edie Rose. The collection was launched in September 2008. Her idea was to keep fashionable items accessible to young women by keeping the prices of each piece under $100.[31] An advertising image was released in July 2008 which featured Bilson modelling her Edie Rose collection.[32]

Bilson stated that she wanted to keep her fashion line "as separate as possible from Rachel Bilson the actress. I'm hoping people will appreciate it for the clothes, not the person behind them."[33] Much of her fashion collection was lost when her home was burglarized in May 2009.[34] Bilson's fashions and sense of style made her the unwitting target of the Bling Ring, who burglarized her home on several occasions.[35][36]

In 2013, Bilson designed a shirt for Invisible Children.[38]

Bilson and Adam Brody, her co-star on The O.C., dated for three years.[39] After she and Brody broke up, Bilson began a relationship with actor Hayden Christensen, with whom she co-starred on Jumper.[2]

By January 2008, the pair had been seen and photographed together around Los Angeles for almost a year, without confirming a relationship.[40] In February 2009, Bilson appeared publicly with what appeared to be an engagement ring, though no official announcement was made.[41] In August 2010, Bilson's representative confirmed there had been an engagement that had since been called off, giving no other details.[42] The two reconciled three months afterward,[43] and had daughter Briar Rose Christensen on October 29, 2014.[44] The couple supports the coalition No Kids Policy, which seeks to prevent children of celebrities from being photographed without parental consent.[43] Bilson and Christensen separated in September 2017.[45]