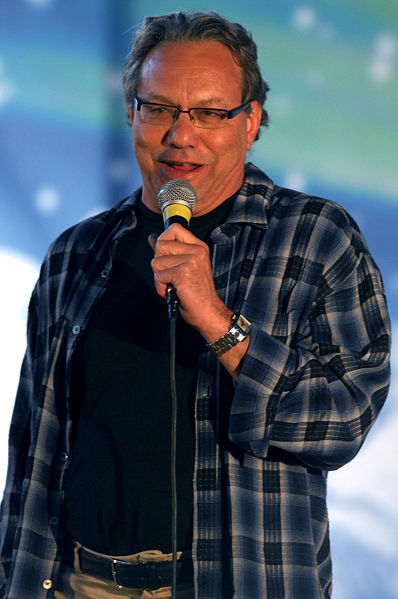 Lewis Niles Black[1] (born August 30, 1948)[2] is an American stand-up comedian, author, playwright, social critic and actor. He is best known for his angry demeanour and belligerent comedic style, in which he often simulates having a mental breakdown. His comedy routines often escalate into angry rants about history, politics, religion, or any other cultural trends. He hosted the Comedy Central series Lewis Black's Root of All Evil and makes regular appearances on The Daily Show with Trevor Noah delivering his "Back in Black" commentary segment, which he has been doing since The Daily Show was hosted by Craig Kilborn.

When not on the road performing, Black resides in Manhattan, but also maintains a residence in Chapel Hill, North Carolina. He is also a spokesman for the Aruba Tourism Authority, appearing in television ads that first aired in late 2009 and 2010, as well as the voice of Anger in 2015's Pixar film, Inside Out. He was voted 51st of the 100 greatest stand-up comedians of all time by Comedy Central in 2004; he was voted 5th in Comedy Central's Stand Up Showdown in 2008 and 11th in 2010. Black has served as an "ambassador for voting rights" for the American Civil Liberties Union, since 2013.[3]

Black was born in Washington, D.C.,[4] the son of Jeannette, a teacher, and Sam Black, an artist and mechanical engineer.[5] He was raised in a middle-class Jewish family in Silver Spring, Maryland,[6] graduating from Springbrook High School in 1966.[7]

Black recounts in his book Nothing's Sacred that he scored highly on the math section of his SAT exam and later applied to Yale, Princeton, Brown, Amherst, Williams, and Georgetown. Every college he applied to except Georgetown rejected him, and by that point he had decided he did not want to go there, so he spent a year at University of Maryland before transferring to the University of North Carolina at Chapel Hill. There, he studied playwriting and was a brother of Pi Lambda Phi International fraternity and a member of Student Congress.[8] After graduating in 1970, he returned to Washington, where he worked at the Appalachian Regional Commission, wrote plays, and performed stand-up comedy at the Brickskeller in Dupont Circle.[2]

Black's career began in theater as a playwright. He served as the playwright-in-residence and associate artistic director of Steve Olsen's West Bank Cafe Downstairs Theatre Bar in Hell's Kitchen in New York City, where he collaborated with composer and lyricist Rusty Magee and artistic director Rand Foerster on hundreds of one-act plays from 1981 to 1989. Also with Rusty Magee, Black wrote the musical The Czar of Rock and Roll, which premiered at Houston's Alley Theatre in 1990. Black's stand-up comedy began as an opening act for the plays; he was also the master of ceremonies. After a management change at the theater, Black left and began working as a comedian, as well as finding bit parts in television and films.

Black's style of comedy is that of a man who, in dealing with the absurdities of life and contemporary politics, is approaching his personal limits of sanity. His techniques include sarcasm, hyperbole, profanity, shouting and his trademark angry finger-shaking, which bring emphasis to his topics of discussion. He once described his humor as "being on the Titanic every single day and being the only person who knows what is going to happen."[10]

Black has described his political affiliation as: "I'm a socialist, so that puts me totally outside any concept...the Canadians get it. But seriously, most people don't get it. The idea of capping people's income just scares people. 'Oh, you're taking money from the rich.' Ooh, what a horrifying thing. These people really need $200 million".[11]

In 1998, Black starred in his first comedy special on the series Comedy Central Presents. He starred in two additional episodes of the series in 2000 and 2002. He starred in another special for the network in 2002, titled Taxed Beyond Belief.

From 2003 to 2005, Black hosted the "World Stupidity Awards" ceremony at Montreal's Just for Laughs comedy festival.

In 2004, he had an HBO stand-up special titled Black on Broadway. Black hosted Comedy Central's Last Laugh '07, which aired on December 2, 2007 along with Dave Attell and D.L. Hughley.

In 2006, Black performed at the Warner Theatre in Washington, D.C. for an HBO special, Red, White, and Screwed. It aired in June and a DVD was released in October. When explaining his choice of venue, Black said that "some asshole" was paid to count the number of times the word "fuck" was said in his previous HBO special, Black On Broadway, and that the original location, the Kennedy Center, wanted him to cut back on its use. Black was told the number was 42, when actually it was approximately 78.[citation needed]

Black received a 2007 Grammy award for "Best Comedy Album" for his album The Carnegie Hall Performance.[13]

In 2008, Black hosted History of the Joke with Lewis Black,[15] a 2-hour comedy-documentary on The History Channel.

In 2009, Black filmed two shows at the Fillmore Theater in Detroit, Michigan. These were the basis for the concert film Stark Raving Black, which appeared in theaters for a limited time in October, and was released on video the next year.[16]

At the end of 2009, Black returned to the History Channel to host Surviving the Holidays with Lewis Black, in which he discussed the year-end pressures of Thanksgiving, Channukah, Christmas, and New Year's.

In 2011, Black filmed two shows at the State Theatre in Minneapolis, MN.[17] The shows were used for Black's comedy special "In God We Rust". The special premiered on Epix HD.[18]

An extended and uncensored version of the special broadcast on Epix HD was released on DVD and Blu-ray on September 11, 2011.[19]

In August 2013, Black recorded his ninth stand-up special Old Yeller: Live at the Borgata. Deadline reported that Black and the company that was releasing the stand-up special, Image Entertainment, would later air it in the form of pay-per-view and VOD, making it the first comedy special to air simultaneously on all cable, satellite and telco platforms.[20]

In the film Accepted, a film about high school graduates who create a college when they fail to get accepted into any, he played Dean Ben Lewis of the school "South Harmon Institute of Technology". He also appeared in the 2006 films Man of the Year and Unaccompanied Minors. Black hosted Comedy Central's Last Laugh '06, which aired on December 10, 2006.

Black was the voice of "Manobrain" during the third season of the Cartoon Network series "Duck Dodgers". He was the inventor of a diet pill which was stolen while he was in college. He blamed the theft on his college friend Dr. I. Q. Hi, not realizing that the actual thief was Duck Dodgers. The theft set Manobrain on the path of evil.

Black provided the voice of the Deadly Duplicator in four episodes of the Adult Swim show Harvey Birdman: Attorney at Law and in the video game based on the show.

Black provided the voice of oxpecker Ted in the My Gym Partner's a Monkey episode, "Hornbill and Ted's Bogus Journey". The character is portrayed in the same fashion as his comedy shows, though without profanity. In addition, the bird's clothes, looks, and mannerisms match those of himself. He also voiced Mr. E/Ricky Owens in Scooby-Doo! Mystery Incorporated and in Teenage Mutant Ninja Turtles a middle-aged man named Vic who is kidnapped by the Krang and mutated into a spider-like monster called "Spider-Bytez" by Michelangelo. He also voiced Anger in the Pixar film Inside Out.

On June 29, 2007, Black gave a benefit show at Springbrook High School, his alma mater, in the school's auditorium for 1,100 alumni, faculty, and students. He performed in his usual style, stopping at points to remark how good it felt to use that language on that particular stage. At the end of the show he was given a Springbrook football jersey, and cursed at one teacher for giving him a B and causing him not to graduate first in his class.

In mid-December 2007, Black went with Robin Williams, Kid Rock, Lance Armstrong and Rachel Smith, Miss USA 2007, on a USO trip to support the troops in Iraq and Kuwait. The last show was on 22 December at the U.S Naval Station in Rota, Spain.

In 2008, Black went on tour to promote his book Me of Little Faith.[21] Black did a stand-up tour called "Let Them Eat Cake", with material from that tour being featured on his comedy album Anticipation.

Beginning in January 2010, Black embarked on a new tour called "In God We Rust".

Lewis Black at "Stand Up for Heroes"

In 2000, Black and fellow comedian Jim Norton were arrested for their involvement with "The Naked Teen Voyeur Bus",[24] a specially designed bus with acrylic glass walls containing numerous 18- and 19-year-old topless women. This bus was driven around Manhattan while reports about it were broadcast on the Opie and Anthony radio show. The radio station management did not inform the O&A show that the bus's route was also the route that President Clinton was using that day. Twenty-eight hours after their arrest, Black and Norton were released. Black appeared on The Daily Show the following night where he stated he was exercising his constitutional rights. He then joked that the location of this particular right was unclear, but that it was "between 'all men are created equal' and 'don't shit where you eat.'"[25]

Report a problem
Write to Lewis Black at FanPal • 2022