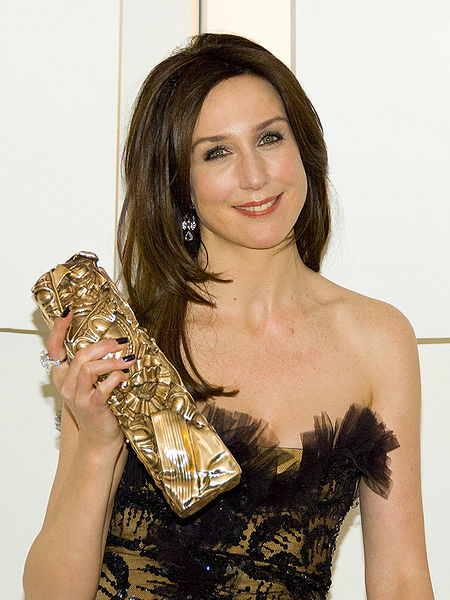 Elsa Zylberstein (born 16 October 1968)[1] is a French film, TV, and stage actress. After studying drama, Zylberstein began her film career in 1989, and has appeared in more than 60 films. She won the César Award for Best Supporting Actress for I've Loved You So Long (2008).

Zylberstein was born Elsa Florence Zylbersztejn[1] in Paris to an Ashkenazi Polish father, Albert Zylberstein, and a Catholic mother. Her father is a physicist. Zylberstein felt both Jewish and Christian; now she is "attracted to Buddhist rites".[2] She has practised classical dance since her childhood. After a Baccalauréat A3, she began university and studied English, but she was strongly attracted to artistic pursuits. She studied acting under Francis Huster at the Cours Florent.[3][4]
Read more...

Elsa Zylberstein in 2009, at the 34th César Awards

In 1991, Elsa Zylberstein appeared in Van Gogh directed by Maurice Pialat. In 1992, she won the Michel Simon Prize and the first of her three nominations for the César Award for Most Promising Actress. In 1993, she played a student in Beau fixe, and won the Prix Romy Schneider.

She inspired young directors such as Pascale Bailly, Diane Bertrand and especially Martine Dugowson, who offered her the lead role alongside Romane Bohringer in Mina Tannenbaum (1994). She then appeared in Farinelli, Mr N., and Jefferson in Paris. She played Suzanne Valadon in Lautrec, and then the mistress of the artist, Modigliani, in Modigliani. Zylberstein played a Yiddish singer who falls in love with a gay clarinetist in Man Is a Woman, with Antoine de Caunes. She also gained roles in Time Regained, Love Torn in a Dream, and That Day.

In 2006 she played Mathilde, an Orthodox Jewish woman faced with marriage problems in Little Jerusalem. She also appeared in J'invente rien, based on a novel by Christine Angot. In 2008, she was in two films presented at the Berlin Festival: I've Loved You So Long, with Kristin Scott Thomas, and La Fabrique des sentiments.

Zylberstein dated Antoine de Caunes between 1997 and 2005. Then she dated Nicolas Bedos from 2005 to 2008.[5] Later she dated Georges-Marc Benamou, advisor to French president Nicolas Sarkozy, although she is a staunch supporter of the Socialist Party.