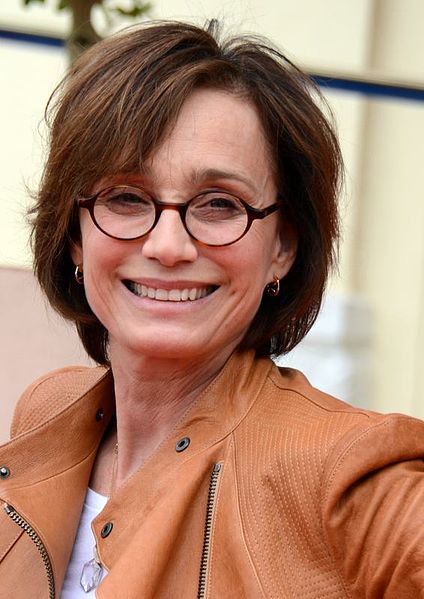 Scott Thomas was born in Redruth, Cornwall. Her mother, Deborah (née Hurlbatt), was brought up in Hong Kong and Africa, and studied drama before marrying Kristin's father,[4] Lieutenant Commander Simon Scott Thomas, a pilot in the Royal Navy's Fleet Air Arm who died in a flying accident when Kristin was aged five.[5][6] She is the elder sister of actress Serena Scott Thomas, the niece of Admiral Sir Richard Thomas (a former Black Rod, the parliamentary ceremonial officer in the House of Lords),[7] and the great-great-niece of the ill-fated explorer Captain Scott, who lost the race to the South Pole.[8]

Scott Thomas was brought up as a Roman Catholic.[9][10] Her childhood home was in Trent, Dorset, England. Her mother remarried, to another Royal Navy pilot, Lt Cdr Simon Idiens (of Simon's Sircus aerobatic team flying Sea Vixens) who also died in a flying accident, flying a Phantom FG1 off the North Cornwall coast, six years after the death of her father. Scott Thomas was educated at Cheltenham Ladies' College and St Antony's Leweston in Sherborne, Dorset, both independent schools. On leaving school she moved to Hampstead, London, and worked in a department store. She then began training to be a drama teacher at the Central School of Speech and Drama. On being told she would never be a good enough actress, she left at the age of 19 to work as an au pair in Paris.[11] Speaking French fluently, she studied acting at the École nationale supérieure des arts et techniques du théâtre (ENSATT) in Paris, and at age 25 on graduation, was cast opposite pop star Prince as Mary Sharon, a French heiress, in the 1986 film Under the Cherry Moon.

Her breakthrough role was in a 1988 adaptation of Evelyn Waugh's A Handful of Dust, where she won an Evening Standard British Film Award for most promising newcomer. This was followed by roles opposite Hugh Grant in Bitter Moon and Four Weddings and a Funeral where she won a BAFTA for Best Supporting Actress.

In 1994, she starred in the Romanian-French film An Unforgettable Summer, in which she played Marie-Thérèse Von Debretsy. Rather than learn Romanian for the part, she read her lines phonetically.[12] She had all the lines translated into French, which she speaks fluently, so she knew what she was saying.[13][14] In a 2002 interview for WENN, Kristin stated that this is the film that she is most proud of and that she views it as the peak of her career.[15][better source needed] In an interview for Gloucester Citizen on March 22, 2015, she cited An Unforgettable Summer as one of the films that she's most proud of alongside The English Patient and Only God Forgives.[16]

1996 saw the release of her most famous role as Katharine Clifton in The English Patient, which gained her Golden Globe and Oscar nominations as well as critical acclaim. This was followed by a brief period working in Hollywood on films such as The Horse Whisperer with Robert Redford and Random Hearts with Harrison Ford. However, growing disillusioned with Hollywood, she took a year off to give birth to her third child.

She returned to the stage in 2001 when she played the title role in a French theatre production of Racine's Berenice and on screen as Lady Sylvia McCordle in Robert Altman's critically acclaimed Gosford Park. This started a critically acclaimed second career on stage, in which she has received four nominations for a Laurence Olivier Award for Best Actress, including one win, for her performance of Arkadina in a London West End production of Anton Chekhov's The Seagull.[17] She reprised the role in New York in September 2008.[18] In summer 2011, Scott Thomas returned to London's West End to star as Emma in Harold Pinter's Betrayal at the Comedy Theatre. The revival was directed by Ian Rickson. Her husband was played by Ben Miles and the love triangle was completed by Douglas Henshall. In January 2013, she starred in another Pinter play, Old Times, again directed by Ian Rickson. In 2014, she appeared at The Old Vic in the title role of Sophocles's Electra.

Scott Thomas also has acted in French films. In 2006, she played the role of Hélène, in French, in Ne le dis à personne (Tell No One), by French director Guillaume Canet. In 2008, Scott Thomas received many accolades for her performance in Il y a longtemps que je t'aime (I've Loved You So Long), including BAFTA and Golden Globe nominations for Best Actress. In 2009 she played the role of a wife who leaves her husband for another man in the film Leaving. In Sarah's Key (2010), Scott Thomas starred in Vel' d'Hiv Roundup, as an American journalist living in Paris who discovers that the flat her husband is renovating for them was once the home of a Jewish family who were evicted.

Other recent roles include the role of Elizabeth Boleyn, Countess of Wiltshire and Ormond, mother of Henry VIII's second wife Anne, in The Other Boleyn Girl, the role of a fashion magazine creator and editor in the film Confessions of a Shopaholic, the film adaption of Douglas Kennedy's novel The Woman in the Fifth, the 2012 film Bel Ami, based on the 1885 Maupassant novel, as a love interest of George Duroy (played by Robert Pattinson).[19] and was also seen in Ralph Fiennes's The Invisible Woman, in Philippe Claudel's Before the Winter Chill, in Nicolas Winding Refn's Only God Forgives, which premiered at the 2013 Cannes Film Festival, Israel Horovitz's My Old Lady, and the film adaptation of Irène Némirovsky's World War II novel Suite Française, directed by Saul Dibb.

In May 2017, it was reported that Scott Thomas has signed on to star as BMW heiress Susanne Klatten in the thriller Paramour, directed by Alexandra-Therese Keining.[20]

Scott Thomas is divorced from François Olivennes, a French gynaecologist, with whom she has three children: Hannah (born in 1988), Joseph (1991) and George (2000). She has lived in France since she was 19, brought up her three children in Paris,[25] and sometimes considers herself more French than British.[26][27][28]