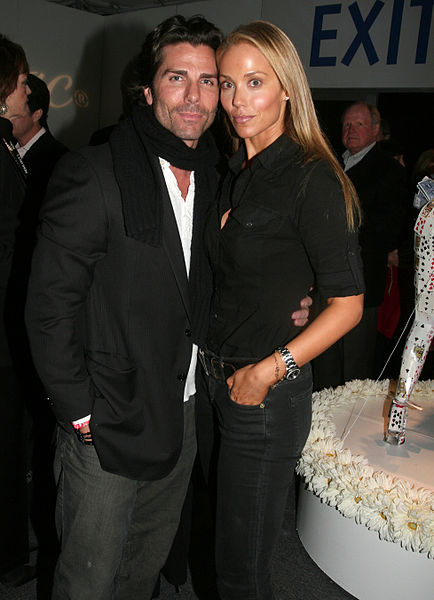 Elizabeth Berkley Lauren (born July 28, 1972)[a][1] is an American actress and reality show personality. Berkley's most notable roles were as Jessie Spano in the television series Saved by the Bell, and as Nomi Malone in the 1995 Paul Verhoeven film Showgirls.

Berkley was born and raised in Farmington Hills, a community located among Detroit's northern suburbs in the affluent Oakland County, Michigan. She is the daughter of Jere, a gift basket business owner, and Fred Berkley, a lawyer.[2] She has an older brother, Jason. [3] Berkley's family is Jewish. She was raised in a Conservative Judaism household, and at age 12 had a Bat Mitzvah.[4][5] Berkley was born with heterochromia, the condition of differently colored irises; her right eye is half green and half brown, and her left eye is all green. She also has a mole on her forehead which she covers with camouflage makeup, citing it was a bother to her growing up, after name calling.[6] She graduated in 1990 from North Farmington High School in Farmington Hills after previously having attended the Cranbrook Kingswood School, a private school in Bloomfield Hills.[citation needed]

From a young age she danced, and she practiced in a room that her parents arranged for her in the basement of their house. She auditioned for the lead role in the film Annie, but was turned down. As her love for dancing increased, she became more interested in pursuing it professionally, traveling to New York to train with other dancers and choreographers.[7] She began to take part in several ballets, including Swan Lake and in 1983 she appeared in some musicals.[8]

After leaving Saved by the Bell to try to break into film, Berkley auditioned for (and won) the role of Nomi Malone, a character in the controversial 1995 Paul Verhoeven film Showgirls.[citation needed] The sex- and nudity-laden film was given a controversial NC-17 rating in the United States (the first big budget film that was deliberately intended to receive this rating), was a box office bomb,[10][11][12] and was widely panned by critics. Berkley was dropped by her agent; due to the negative fallout from the film other agents refused to take her telephone calls.[13] Over the years, however, Showgirls has achieved cult status among film fans and ranks 36 on Entertainment Weekly's list of the Top 50 Cult Movies.[citation needed]

Berkley was cast in the title role in the anime film Armitage III: Poly Matrix, which also starred Kiefer Sutherland, and accepted a small role in The First Wives Club, a comedy starring Diane Keaton, Goldie Hawn, and Bette Midler. She then played a Madonna body double named Tina in the independent film The Real Blonde. She has performed in supporting roles in independent films such as The Taxman, Tail Lights Fade, Roger Dodger, and Moving Malcolm.[citation needed] She also had a small role as a call girl hired by Al Pacino's character in Oliver Stone's sports drama Any Given Sunday, as well as a key supporting role in Woody Allen's The Curse of the Jade Scorpion.[citation needed]

Berkley appeared on stage opposite Eddie Izzard for her role as Honey in the London stage version of Lenny in 1999.[citation needed] She went on to make her Broadway debut in the comedy Sly Fox, opposite Richard Dreyfuss in February 2004, three months after her marriage to artist Greg Lauren.[citation needed] She replaced Catherine Keener as Bonnie in the 2005 Off Broadway production of David Rabe's Hurlyburly, appearing alongside Ethan Hawke, Parker Posey and Bobby Cannavale.[citation needed]

Berkley received much praise for her role in Hurlyburly, with Charles Isherwood of The New York Times even going as far as apologizing to her for his past criticisms of her ability, stating that the fact she held "her own among this skilled company of scene-stealers is a testament to how much her talent has grown".[14] In 2006 stage she appeared at the sixth annual 24 Hour Plays alongside Jennifer Aniston, Rosie Perez, and Lili Taylor, in which six writers, six directors, 24 actors, and production crews have 24 hours to write, direct, and perform six 10-minute plays.[15]

In 2008, Berkley signed on to star in a multi-episode arc of CSI: Miami, in which she plays Horatio Caine's (David Caruso) ex-lover, Julia Winston, who is also the mother of his recently discovered son.[17] The episodes which Berkley appeared in were very highly rated and all of them featured in the top 10 Nielsen ratings chart.[18] She has since appeared in the show's season six finale.[19]

Berkley hosted Bravo's reality series, Step It Up and Dance, a competition featuring the exploits of 10 wannabe dancers who compete against each other to win a cash prize of $100,000 as well as the opportunity to work with and perform for some of the country's top choreographers.[20] The show premiered in April 2008 on Bravo and was cancelled after the first season. The show came out as the network's strongest ever in its time slot (10/11c) with 826,000 viewers.[21] The show continued to perform well throughout its run, averaging 756,000 viewers each week - of whom 522,000 were aged 18 to 49 - and helped contribute to Bravo's highest-rated April ever.[22] According to Berkley hosting the show is a very fulfilling job. She was quoted as saying that she gets "invested in the dancers" because she has befriended many of them offstage.[23]

During the press tour for Step It Up and Dance, Berkley appeared on various shows including various morning news programs, ABC's Jimmy Kimmel Live!, Fuse TV's The Sauce, E!'s Chelsea Lately, CNBC's The Big Idea with Donny Deutsch, and ABC's The View. While on The View, she spoke of her admiration for co-host Whoopi Goldberg, calling her "an extraordinary being". Her appearance on the show was unique in that she brought the ladies of the show tap shoes and taught them a short dance routine.[citation needed] Berkley starred alongside Thomas Jane in the David Arquette directed short film The Butler's in Love which premiered at Mann's Chinese Theatre in Los Angeles in June 2008.[citation needed]

In 2009, Berkley starred in a multi-episode arc of the Showtime series The L Word, during its sixth and final season. She played Kelly Wentworth, a straight girl who got away from Jennifer Beals' character Bette Porter in college. Berkley and Beals are best friends in real life, having previously worked on the 2002 independent film Roger Dodger.[24] Berkley continued with television work, reprising her role as Julia Winston in CSI: Miami, appearing in three more episodes, including the season seven finale. In the sequel to the cult hit Donnie Darko, S. Darko, she played Trudy, a former drug addict turned born again Christian who becomes infatuated with her pastor. She also appeared as Tracy in the 2009 comedy Women in Trouble.[citation needed]

During Berkley's guest appearance on Late Night with Jimmy Fallon in June 2009, her Saved by the Bell co-star Mark-Paul Gosselaar - as Zack Morris[25] - expressed his desire to take part in Jimmy Fallon's "class reunion" of the show's original cast members and revealed that Berkley has also agreed to take part in the reunion.[26] Dennis Haskins, Lark Voorhies, Mario Lopez, Elizabeth Berkley and Mark-Paul Gosselaar agreed to a reunion.[27][28] Gosselaar reprised his role as Zack Morris on Late Night on June 8, 2009, while promoting his then current TNT drama, Raising the Bar. The spoof interview closed with a performance of "Friends Forever" originally by Zack Attack, where Zack played guitar and sang with backing from Fallon's house band, the Roots. Tiffani Thiessen posted a parody video to the online website Funny or Die, where she said she was just too busy to join in a reunion.[29]

In 2011, Berkley played the lead female role in the Hallmark Channel original movie Lucky Christmas, about a woman who wins the lottery only to have to recover the ticket from the glove compartment of her stolen car. The film premiered on Hallmark Film Channel on November 12, 2011.[30]

In September 2013, Berkley was announced as one of the contestants on the 17th season of Dancing with the Stars. She partnered with Valentin Chmerkovskiy.[31] They were eliminated on the 9th week of competition and landed in 6th place despite receiving high judge scores. Several perfect scores were earned & awarded by expert panel judges. Ultimately however, the public vote eliminated her team based upon popularity metrics used by the show.

In 2014, the TV movie The Unauthorized Saved by the Bell Story aired, with actress Tiera Skovbye portraying Berkley.[citation needed] On February 4, 2015, Berkley reunited with Mark-Paul Gosselaar, Mario Lopez, Dennis Haskins and Tiffani Thiessen on The Tonight Show Starring Jimmy Fallon where they appeared in a Saved by the Bell sketch with Fallon.[32][33][34]

In 2006, Berkley set up a self-help program online for teen girls called Ask-Elizabeth.[35] The website was created when husband Greg Lauren commented on the number of girls who came to her asking for advice and joked that she should have her own column. She regularly meets with young girls to discuss different issues and topics and to help them with any problems that they are going through and speaks of her own troubles in the past.[citation needed]

Ask-Elizabeth was also the working title of a reality series focusing on the program's success and its continued efforts to help girls throughout the country.[36] The show, produced by MTV,[37] featured Berkley traveling around the United States looking at the issues and topics most important to teenage girls. Amy Bailey, vice president of development in MTV's News & Documentaries division, said Berkley approached MTV with the idea. "She does these workshops around the country with teen girls and gets them to really open up about self-esteem and body issues," said Bailey. "We had been looking for a program that tackled the same issues, so it seemed like a perfect match."[38] The status of the show itself is unknown as it was originally expected to premiere in late 2008, but production has since been pushed back indefinitely.[citation needed]

In 2011, Berkley published Ask-Elizabeth, a self-help book for teenage girls which drew from the workshops she conducted for the Ask-Elizabeth program.[39]

Berkley in an advertisement for PETA

Berkley is an animal rights activist and in 1997, donned a $600 form-fitting gown made entirely of collard greens for the "Lettuce Be Lean" campaign, sponsored by PETA to try to encourage people to embrace vegetarianism.[40] In 2008 and 2009, she was among a number of celebrities included in an online poll by PETA to select the "Sexiest Vegetarian of the Year".[41]

In 2000, Berkley was tangentially involved in a $45 million lawsuit when actor and screenwriter Roger Wilson filed suit against Leonardo DiCaprio, claiming that DiCaprio had encouraged his friends to assault Wilson in a street fight, related to invitations to socialize directed at Berkley.[42]

On November 1, 2003, Berkley married artist and occasional actor Greg Lauren at the Esperanza Hotel in Cabo San Lucas. Berkley formally changed her name to Elizabeth Berkley Lauren; however, she still uses her maiden name professionally.[43] On March 5, 2012, Berkley announced she was expecting her first child in the summer.[44] She gave birth to son Sky Cole on July 20, 2012.[45]

Report a problem
Write to Elizabeth Berkley at FanPal • 2022