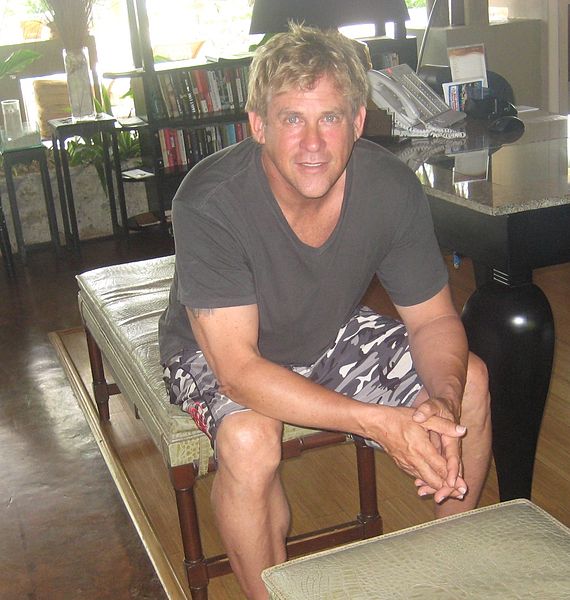 Dudikoff comes from a large family. His father, Michael Joseph Dudikoff, was from a Eastern Orthodox Christian family from Russia, and served in the Army before marrying Dudikoff’s mother, a French-Canadian native from Quebec who was a piano player. The couple moved to California and had five children, Dudikoff is the fourth of the group. He was diagnosed with dyslexia.[2]

Dudikoff graduated from West High School in Torrance, California and shortly of after was studying child psychology at Harbor College.

To pay for his education, he worked at a rehabilitation center for abused youth called Cedar House and waited tables at Beachbum Burt’s in Redondo Beach, California.[3][4] He was eventually approached to do some modelling, and did a catwalk at a shopping mall.

During lunch one day, Dudikoff served Max Evans, a fashion editor with Esquire magazine, who came in with some models. Evans asked Dudikoff to walk in a Newport Beach fashion show, and his mother encouraged him to try it out.

After a couple of successful runways, Dudikoff retained an agent at the Mary Webb Davis Agency in Los Angeles. Dudikoff soon entered the high fashion world and counted Calvin Klein and GQ among his clients. He moved quickly to international print modeling and traveled between New York, Los Angeles, and Milan by his late 20s.

Dudikoff soon began acting, and he starred in several commercials for companies, including Coppertone, Coca-Cola for Japan, Army Reserve and Stridex.

Dudikoff as Douggie Krebs on Star of the Family in 1982

His first television role took place after a meeting with theatrical agent Sid Craig.[5] He went for some readings, and in 1978 he landed a supporting role in one episode of the hit TV show Dallas, and shortly after the part as Joanie’s first boyfriend in the American sitcom Happy Days. Gary Nardino, who was the president of Paramount Studio at the time, happened to be sitting in the audience while they were filming. Nardino putted an holding contract on Dudikoff so that he could work the lot.[6]

In the early 80s, Dudikoff was cast in supporting roles or seen in the background of such films such as, The Black Marble, Bloody Birthday, The Best Little Girl in the World, Neil Simon's I Ought to Be in Pictures, Making Love, Tron and one episode of Gimme a Break!.

During that time, he was cast alongside Brian Dennehy and Katherine Saltzberg to play one of the leads in the sitcom Star of the Family, and got the part of Huckleberry Finn in a Columbia Pictures movie-of-the-week called Sawyer & Finn directed by Peter H. Hunt.

In 1984, he played the role of one of Tom Hanks' sidekicks in the sizable hit comedy film Bachelor Party.

In 1985, The Cannon Group, an independent film company with a streak of successful action films, were looking to produce an action film starring Chuck Norris called American Ninja (1985), which Norris turned down. Shortly after, Cannon went on a worldwide search to find who would play Private Joe Armstrong the American ninja. Over 400 candidates went on to audition for the part. Producer and Owner of Cannon Menahem Golan and director Sam Firstenberg thought he was the obvious choice for the part. Golan even went on to say that he would be the next James Dean. It was a surprise for Dudikoff, who at the time was mostly known for supporting roles in comedies.[7] It was his first collaboration with actor Steve James (1952-1993) who was hired to play the partner of the American ninja, a role he maintained for the first three installments. On a $1 million budget it went on to gross over $10 million domestically in the US and did extremely well in foreign markets.[8] This success would establish the start of the American Ninja film franchise, with Dudikoff becoming a regular action star for The Cannon Group alongside Chuck Norris, Charles Bronson, Sho Kosugi, and later on Jean-Claude Van Damme. For the rest of the 1980s, Dudikoff would continue to star in Cannon Group action film projects.

That same year, he and John Stockwell were cast as co-leads in the cult post apocalyptic science fiction comedy Radioactive Dreams, who was awarded the Golden Raven at the 5th Brussels International Fantastic Film Festival, and nominated for best film at the Italian film and literature festival MystFest.[9]

In 1986, he was cast as Lt. Rudy Bodford in the critically acclaimed mini-series North and South, Book II, starring Patrick Swayze.[10] It went on to receive 3 nominations at the Primetime Emmy Awards.[11]

Also in 1986, he reunited with director Sam Firstenberg and starred in the sequel American Ninja 2: The Confrontation. In this installment Dudikoff and James are ordered to discover why Marines have been going missing from their posts at the US Embassy. The two discover The Lion (Gary Conway) has been kidnapping the missing marines and having them brainwashed to join his army of assassins. The film was less successful than the predecessor, grossing $4 million domestically in the US.[12]

That same year, Dudikoff starred in Avenging Force (1986), his last film with Steve James, directed by Sam Firstenberg. The screenplay was written by James Booth, who co-starred in the film. The film is about retired secret service agent, Captain Matt Hunter (Dudikoff), who lives with his sister Sarah and their grandfather. They drive to New Orleans to meet Matt's old military comrade and local politician Larry Richards (James), who is now running for U.S. Senate. At dinner, Larry hesitantly mentions threats made against his life during the election cycle, which he dismisses as harmless. Later that day, Larry, Matt and their families ride in Larry's float in the Mardi Gras parade. Disguised as revelers, assassins open fire on Larry's float, killing his eldest son. Matt and Larry take down the attackers, but Matt loses the last assassin in charge in the crowd. He calls in a favor to his old boss, Admiral Brown (Booth), and learns the perpetrators are members of an organization which he confront throughout the film.

Platoon Leader (1988) directed by Aaron Norris. The film is about a newly commissioned infantry lieutenant (Dudikoff) who arrives in Vietnam to take over his first platoon. He finds he has to prove himself and earn the trust of the enlisted men if he is to lead them.

He starred in Steve Carver' River of Death (1989), co-starring Robert Vaughn, Donald Pleasence, Herbert Lom, and L. Q. Jones. The story is set in the nightmarish last days of the Third Reich, a psychotic Nazi scientist (Vaughn) escapes to the impenetrable jungles of the Amazon. Years later, a mysterious incurable disease breaks out among the natives and adventurer John Hamilton (Dudikoff) is hired to lead investigators on a search for the cause. Braving bloodthirsty river pirates, hostile native tribes and headhunting cannibals, Hamilton, guides a group of explorers up the deadly Rio del Morte to the fabulous lost Inca city.

In 1989, Dudikoff turned down American Ninja 3: Blood Hunt because he didn't want to get type cast in martial-arts movies and didn't want to go back to South Africa as he was firmly against the apartheid movement and government in that country.[13][14] Martial-arts expert David Bradley was hired to play a new character for the lead in the third installment.[15]

In the early 1990s, Dudikoff continued making action films with The Cannon Group. His first release of that area was the thriller Midnight Ride (1990), co-starring Mark Hamill, and Robert Mitchum.[16] Afterwards, he returned to the American Ninja franchise for the fourth installment American Ninja 4: The Annihilation (1990) where Private Joe Armstrong teams up with the character played by David Bradley.[17][18] This would be last sequel Dudikoff appeared in. The final movie of the series cames three years later, when Bradley made a martial art film where he played someone else that was released as American Ninja 5 (1993), presumably to cash in on the franchise.[19][20]

In 1991, he went to star in The Human Shield directed by Ted Post,. It's about a former government agent who must save his diabetic brother from Iraqi abductors.[21][22]

Also in 1991, he played the main villain for the first time in the television film The Woman Who Sinned.[23]

In 1992, he starred as father figure alongside a young Stephen Dorff in Rescue Me, a coming-of-age adventure action film comedy directed by Arthur Allan Seidelman it co-stars Ami Dolenz, Peter DeLuise, William Lucking...[24][25] Daniel (Dorff) high school' crush (Dolenz) is kidnapped. He and Frazier (Dudikoff) go after them.

The following year, he got the main role in the action TV series Cobra produced by Stephen J. Cannell, co-starring Allison Hossack and James Tolkan. It ran for 22 episodes that are an hour each until 1994.[26]

In 1994, he did final film with The Cannon Group who was going bankrupt called Chain of Command directed by David Worth.[27] The film is about, anti-terrorist operative Merrill Ross (Dudikoff) gets caught in the middle of a deadly international conflict in this explosive adventure. Danger lurks around every corner as Ross tries to thwart a plot to seize control of Qumir and its oil fields. Tailed by agents and a death squad, Ross dodges bullets and barely survives an oil depot blast as he tries to find out who's behind the mercenary scheme.[28]

In 1995, he starred in the virtual thriller Cyberjack, and the action rescue film Soldier Boyz.[29][30]

The following year, he made the air hijack picture Strategic Command with supporting cast Richard Norton, Paul Winfield, Bryan Cranston and Stephen Quadros.[34] As well as the Bounty Hunters sequel Bounty Hunters 2: Hardball, and his only shoot em up western The Shooter by Fred Olen Ray.[35][36] Also in 1997, video game adaption Soldier Boyz of his film was released for Microsoft Windows 95.[37]

In 1999, he played in the Sidney J. Furie suspense drama In Her Defense, with Marlee Matlin, the sci-fi action film Fugitive Mind by Fred Olen Ray with Heather Langenkamp and the action feature The Silencer.[44][45][46]

In 2001, he played a fireman in the action disaster film Ablaze. John Bradley plays the lead as the fire chief, and it co-stars Tom Arnold, Ice-T, Amanda Pays, and Cathy Lee Crosby.[47]

In 2002, he played the main villain in the Treat Williams action vehicle Gale Force. It co-starred Curtis Armstrong, Susan Walters, Tim Thomerson, Marcia Strassman, and many more.[48] The film was nominated in four categories at DVD Exclusive Awards.[49]

2002 also marks his last collaborations with longtime contributors before going on a hiatus. This includes director Sam Firstenberg in the thriller Quicksand, and Fred Olen Ray sci-fi adventure film Stranded.[50][51]

After these efforts Michael Dudikoff felt he needed a break, and started working in real estate specializing in buying old homes to refurbish them.[52] In 2004, he married Belle Dudikoff and are raising twins, a son named Joseph, and a daughter named Nancy.[53]

In 2015, he returned to the screens with a supporting role in Navy Seals vs. Zombies, released by Anchor Bay Entertainment.[58]

Michael Dudikoff had no martial arts training previous to making the first American Ninja movie, but he was already very athletic. Fight choreographer Mike Stone, who was an accomplished Martial Arts expert assured the producers that he would pick up the moves.[59]

In a 2012 Q&A, Dudikoff said that he doesn't lift weights, but is a swimmer, does isometric and dance exercises.[62]

Dudikoff, due to his action film resume, is often rumored to take part in The Expendables film series. In a 2012 interview he stated that he heard talk that never was concluding, and he was happy either way if something came up or not.

Within that same interview, he also hinted at a possible sequel to American Ninja and Avenging Force.[63]