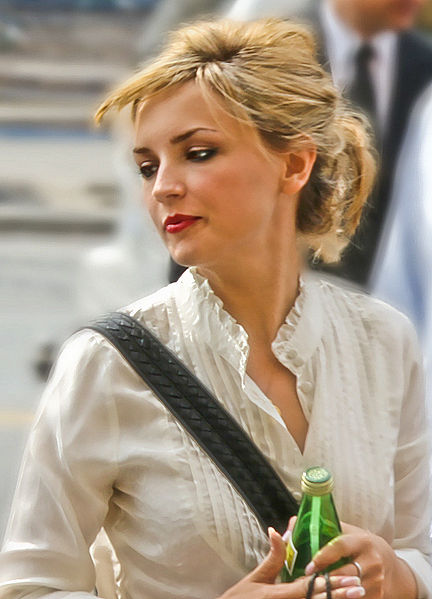 Rachael Leigh Cook (born October 4, 1979) is an American actress, model, voice artist, and producer, who is best known for her starring role in films She's All That (1999), Josie and the Pussycats (2001), and the television series Into the West and Perception, as well as being the voice behind various characters in Robot Chicken and Tifa Lockhart in the Final Fantasy series, starting with the English version of the film Final Fantasy VII: Advent Children.

Cook was born in Minneapolis, Minnesota, the daughter of JoAnn, a cooking instructor and weaver, and Thomas H. Cook, a social worker and former stand-up comedian.[1] She is of part Italian descent. Cook first appeared in a public service announcement for foster care at seven years of age, and began working as a child print model at the age of 10, most notably in nationwide advertisements for Target and appearing on the boxes of Milk-Bone dog biscuits. She attended Clara Barton Open School, Laurel Springs School, and Minneapolis South High School.
Read more...

Cook began auditioning for acting work at the age of 14.[1] She made her debut as an actress in the 1995 film The Baby-Sitters Club. In 1996, her modeling agency sent her to star in a short film, 26 Summer Street. In 1997, Cook appeared in a leading role in the film Country Justice as a 15-year-old rape victim who is impregnated by her rapist.

In 1999, Cook starred her breakout role in the sleeper hit film She's All That, a romantic comedy that so far is the most financially successful film of her career. In 2000 she starred opposite Elijah Wood in the well-received The Bumblebee Flies Anyway. She took the lead role in 2001's Josie and the Pussycats, which turned out to be a box office failure.

In 2000, she was the cover girl for the US issue of FHM, the March/April issue. She also starred in the music video for New Found Glory's 2000 single "Dressed to Kill" and singer Daniel Powter's "Love You Lately". In 2002, she was ranked No. 26 in Stuff magazine's "102 Sexiest Women in the World". In 2003, she starred in the film 11:14 as Cheri. She also appeared as a main cast member in the 2005 television miniseries Into the West produced by Steven Spielberg.

In 2007 Cook was seen in the big screen adaptation of Nancy Drew. She played the female lead in the independent sports drama The Final Season. She has appeared in numerous episodes of the Seth Green comedies Titan Maximum and Robot Chicken. In 2008, she guest-starred in an episode of the USA Network series Psych as Abigail Lytar. She reprised the role in the following season.

Cook starred in the Hallmark Channel original film Summer Love in 2016[7]. In the same year, she starred in another Hallmark film, Autumn In the Vineyard, followed by its sequel Summer in the Vineyard in 2017.[8]. 2017 also saw Cook develop, star and executive produce the Hallmark Channel film Frozen in Love, which was broadcast in January 2018 as part of the channel's 'Winterfest' season of programming.[9][10]

Cook owns her own production company, Ben's Sister Productions (in reference to her younger brother Ben Cook, an aspiring filmmaker).

Cook provided the voice for Chelsea Cunningham on the Kids' WB animated series Batman Beyond and in the animated film Batman Beyond: Return of the Joker. Cook voiced Tifa Lockhart in the video games Kingdom Hearts II, Dirge of Cerberus: Final Fantasy VII and Dissidia 012 Final Fantasy, as well as the CG movie Final Fantasy VII Advent Children. In 2011, she voiced the character of Jaesa Willsaam in the MMO game, Star Wars: The Old Republic. Cook's latest voice-over role is for the video game Yakuza in which she voices the role of Reina.

Cook first gained national attention in 1997, when she was featured in the famous This Is Your Brain on Drugs PSA television advertisement, in which she proceeds to destroy a kitchen with a frying pan as she lists the important things in life that heroin harms.

In 2011, she was selected by the Obama administration as a Champion of Change for Arts Education.[11]

In June 2012, she began to award a small scholarship to students between ages 14 and 19. The scholarship helps pay for career classes, mentoring programs, and other school fees.[1]

In 2017, Rachael Leigh Cook reprised her "This Is Your Brain on Drugs" role twenty years later for a PSA by the Drug Policy Alliance critiquing the War on Drugs and its contribution to mass incarceration, structural racism and poverty. The ad was posted to YouTube on April 20, 2017 in recognition of 4/20.[12]