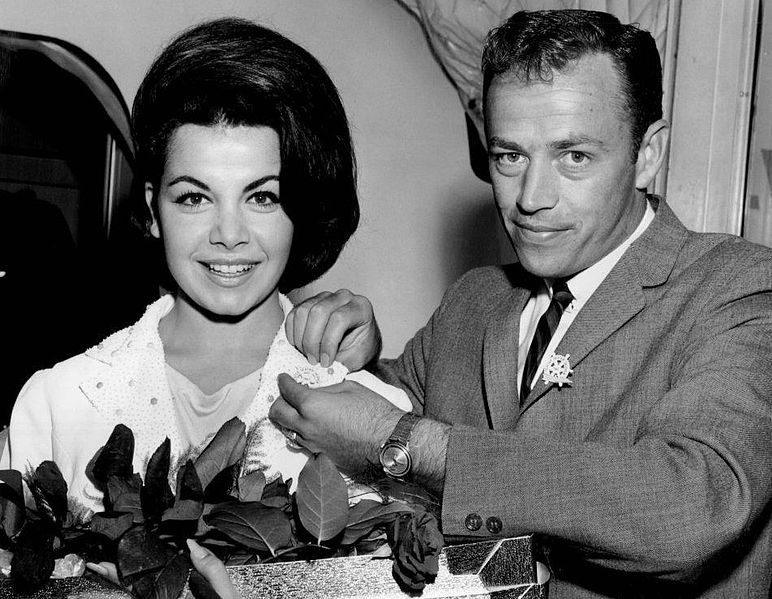 Annette Joanne Funicello (October 22, 1942 - April 8, 2013) was an Italian American actress and singer. Funicello began her professional career as a child performer at the age of twelve. She rose to prominence as one of the most popular Mouseketeers on the original Mickey Mouse Club.[1] As a teenager, she transitioned to a successful career as a singer with the pop singles "O Dio Mio", "Tall Paul" and "Pineapple Princess", as well as establishing herself as a film actress, popularizing the successful "Beach Party" genre alongside co-star Frankie Avalon during the mid-1960s.

In 1992, Funicello announced that she had been diagnosed with multiple sclerosis. She died of complications from the disease on April 8, 2013.

Funicello as a Mouseketeer on The Mickey Mouse Club (1956)

Annette took dancing and music lessons as a child to overcome shyness. In 1955, the 12-year-old was discovered by Walt Disney when she performed as the Swan Queen in Swan Lake at a dance recital at the Starlight Bowl in Burbank, California. Disney cast her as one of the original Mouseketeers. She was the last to be selected, and one of the few cast-members to be personally selected by Walt Disney himself. She proved to be very popular and by the end of the first season of The Mickey Mouse Club, she was receiving 6,000 letters a month, according to her Disney Legends biography.

In addition to appearing in many Mouseketeer sketches and dance routines, Funicello starred in several serials on The Mickey Mouse Club. These included Adventure in Dairyland, Walt Disney Presents: Annette (which co-starred Richard Deacon), and the second and third Spin and Marty serials - The Further Adventures of Spin and Marty and The New Adventures of Spin and Marty. In a hayride scene in the Annette serial, she performed the song that launched her singing career. The studio received so much mail about "How Will I Know My Love" (lyrics by Tom Adair, music by Frances Jeffords and William Walsh[4][5]), that Walt Disney issued it as a single, and gave Funicello (somewhat unwillingly) a recording contract.[6]

A proposed live-action feature Rainbow Road to Oz was to have starred some of the Mouseketeers, including Darlene Gillespie as Dorothy and Funicello as Ozma. Preview segments from the film aired on September 11, 1957, on Disneyland's fourth anniversary show.[7] By then, MGM's The Wizard of Oz had already been shown on CBS Television for the first time. Theories on why the film was abandoned include Disney's failure to develop a satisfactory script, and the popularity of the MGM film on television. Disney ultimately replaced this film project with a new adaptation of Babes in Toyland (1961), which starred Funicello as "Mary Contrary".

Funicello and Richard Tyler on The Danny Thomas Show (1959)

After the Mickey Mouse Club, she remained under contract with Disney for a time, with television roles in Zorro, Elfego Baca and The Horsemasters. For Zorro, she played Anita Cabrillo in a three-episode storyline about a teen-aged girl arriving in Los Angeles to visit a father who does not seem to exist. This role was reportedly a birthday present from Walt Disney, and the first of two different characters played opposite Guy Williams as Zorro. Annette also co-starred in Disney-produced movies such as The Shaggy Dog, Babes in Toyland, The Misadventures of Merlin Jones and The Monkey's Uncle. The Monkey's Uncle featured Annette singing with the Beach Boys.[8]

Although uncomfortable being thought of as a singer, Funicello had a number of pop record hits in the late 1950s and early 1960s, mostly written by the Sherman Brothers and including: "Tall Paul", "First Name Initial", "O Dio Mio", "Train of Love" (written by Paul Anka) and "Pineapple Princess". They were released by Disney's Buena Vista label. Annette also recorded "It's Really Love" in 1959, a reworking of an earlier Paul Anka song called "Toot Sweet". Paul Anka was noted to have a crush on her, however, Walt Disney overprotected Annette, which broke Paul's heart. This resulted in his song "Puppy Love", which was inspired by his hopeless romantic crush on Annette.

In an episode of the Disney anthology television series titled "Disneyland After Dark", Funicello can be seen singing live at Disneyland. Walt Disney was reportedly a fan of 1950s pop star Teresa Brewer and tried to pattern Funicello's singing on the same style. However, Funicello credits "the Annette sound" to her record producer, Tutti Camarata, who worked for Disney in that era. Camarata had her double-track her vocals, matching her first track as closely as possible on the second recording to achieve a fuller sound than her voice would otherwise produce.[citation needed] Early in her career, she appeared on the NBC interview program Here's Hollywood.[6]

Funicello moved on from Disney to become a teen idol, starring in a series of "Beach Party" movies with Frankie Avalon for American International Pictures. These started with Beach Party (1963), which was so successful American International Pictures signed Funicello to a seven-year contract,[9] and was followed by Muscle Beach Party (1964), Bikini Beach (1964), Pajama Party (1964), Beach Blanket Bingo (1965) and How to Stuff a Wild Bikini (1965).

When she was cast in her first beach movie, Walt Disney requested that she wear only modest bathing suits and keep her navel covered. However, she wore a pink two-piece in Beach Party, a white two-piece fishnet suit in the second film (Muscle Beach Party) and a blue and white bikini in the third (Bikini Beach). All three swimsuits bared her navel, particularly in Bikini Beach, where it is visible extensively during close up shots in a sequence early in the film when she meets Frankie Avalon's "Potato Bug" character outside his tent.[10]

She and Avalon became iconic as "beach picture" stars and were reunited for the Paramount film Back to the Beach (1987), parodying their own surf-and-sand films two decades earlier. They toured the country as a singing act.

In 1979, Funicello began starring in a series of television commercials for Skippy peanut butter.[11]

Her autobiography, dictated to Patricia Romanowski and published in 1994, was A Dream Is a Wish Your Heart Makes: My Story. The title was taken from a song from the Disney movie Cinderella. A television film based on the book, A Dream Is a Wish Your Heart Makes: The Annette Funicello Story, was made in 1995. In the final scene, the actress portraying Funicello (Eva LaRue), using a wheelchair, turns away from the camera — turning back, it is Funicello herself, who delivered a message to a group of children. During this period, she produced a line of teddy bears for the Annette Funicello Collectible Bear Company.[3] The last collection in the series was made in 2004. She also had her own fragrance called "Cello, by Annette".

Funicello's best friend was actress and singer Shelley Fabares. She and Fabares had been friends since they were young teenagers in a catechism class, and Fabares was a bridesmaid at Funicello's first wedding. She was also very close to fellow Mouseketeers Lonnie Burr (she later claimed in an autobiography that he was her first boyfriend during the first season of the Mickey Mouse Club), Sharon Baird, Doreen Tracey, Cheryl Holdridge, her "Disney" co-star, Tommy Kirk, and her "Beach" movies co-star, Frankie Avalon. She dated Canadian singer/songwriter Paul Anka and he wrote his hit song "Puppy Love" about her. Annette was raised in a Catholic family.[12]

After the fire, Funicello and Holt then began living full-time at the modest ranch that they had purchased decades earlier, located just south of Shafter, California (north of Bakersfield). That remained her primary residence until her death.[14]

In early 1987, Funicello reunited with Frankie Avalon for a series of promotional concerts to promote their film Back to the Beach. She began to suffer from dizziness and balance issues, but initially kept the episodes from family and friends. In 1992, Funicello announced that she was suffering from multiple sclerosis.[15] She felt that it was now necessary to go public in order to combat rumors that her impaired ability to walk was the result of alcoholism. In 1993, she opened the Annette Funicello Fund for Neurological Disorders at the California Community Foundation.[16]

On October 6, 2012, the CTV flagship current affairs program W5 profiled Funicello following her fifteen years away from the public eye. The program revealed that her disease had severely damaged her nervous system; Funicello had lost the ability to walk in 2004, the ability to speak in 2009, and, at the time of the profile, she required round-the-clock care in order to survive. In the profile, Holt and her closest friend, actress Shelley Fabares, discussed Funicello's state at the time, as well as the numerous medical interventions and treatments that had been attempted in order to improve her condition.[17]

On April 8, 2013, Funicello died at Mercy Southwest Hospital in Bakersfield, California, at age 70, from complications due to multiple sclerosis.[18] At the time of her death, Funicello's family and Fabares were with her.[19] Her funeral was a private ceremony held on April 12, 2013, at the Cherished Memories Memorial Chapel in Bakersfield, California.[20] Commenting on her death, Bob Iger, Chairman and CEO of the Walt Disney Company, said,

Annette was and always will be a cherished member of the Disney family, synonymous with the word Mouseketeer, and a true Disney Legend. She will forever hold a place in our hearts as one of Walt Disney's brightest stars, delighting an entire generation of baby boomers with her jubilant personality and endless talent. Annette was well known for being as beautiful inside as she was on the outside, and she faced her physical challenges with dignity, bravery and grace. All of us at Disney join with family, friends and fans around the world in celebrating her extraordinary life.[21]

Media coverage of Funicello's death was almost completely overshadowed by that of former British prime minister Margaret Thatcher who died on the same day.

After her death, the Disney Channel Original movie Teen Beach Movie (2013) was dedicated to her memory.[citation needed]

She received her star on the Hollywood Walk of Fame for motion pictures on September 14, 1993, located at 6834 Hollywood Blvd.

In the Disney Village shopping and dining area of Disneyland Paris, a 1950s themed restaurant, Annette's Diner, is named after her.

Funicello as a participant in Seattle Seafair's Torchlight Parade, 1963

Report a problem
Biography of Annette Funicello at FanPal • 2021