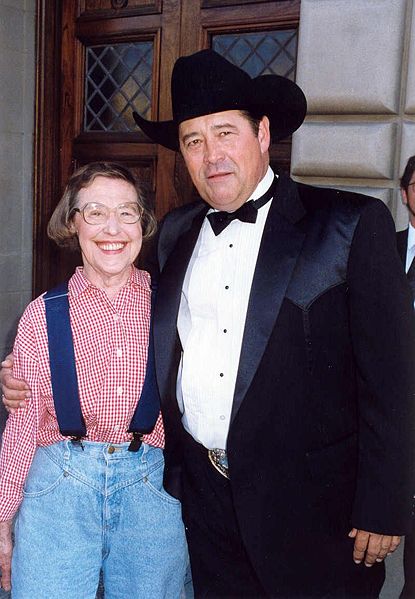 Corbin was born in Lamesa, the seat of Dawson County, south of Lubbock in West Texas. He is the son of the former Alma LaMerle Scott (1918-1994), a teacher, and Kilmer Blaine Corbin, Sr. (1919-1993), a school principal, judge, and Democratic member of the Texas State Senate for two terms, from 1949-1957.[2] Corbin was named for author J. M. Barrie by his mother.[3] He played football briefly in eighth grade, but soon moved to the arts, including acting and ballet classes.[3] He graduated from Monterey High School. Corbin studied theatre arts at Texas Tech University in Lubbock.[4] At 21, he joined the United States Marine Corps, served two years, and then returned to Tech.[5]
Read more...

Corbin began his career as a Shakespearean actor in the 1960s, but today he is more likely to be seen in the role of the local sheriff, military leader, or some other authority figure, though on occasion, he has effectively portrayed murderous villains, as well. To moviegoers, he is well remembered as General Beringer in WarGames, John Travolta's uncle Bob Davis in Urban Cowboy, co-starring with Clint Eastwood in Any Which Way You Can, or Roscoe Brown, July Johnson's bumbling deputy in the acclaimed western Lonesome Dove.

From 1979 until 1984, he appeared in several episodes of Dallas as Sheriff Fenton Washburn. In 1983, Corbin co-starred in the famed television miniseries The Thorn Birds. Corbin played Mary Carson's stockman Pete, who teaches the Cleary's sons how to shear sheep on their aunt's gigantic sheep station Drogheda, in Australia. In 1983-1984, Corbin played Merit Sawyer in the NBC television series Boone. Corbin's role was that of a stern father to the young actor Tom Byrd, who played Boone Sawyer, an aspiring singer. The program was set in rural Tennessee during the 1950s and was created by Earl Hamner, who had great success earlier with CBS's The Waltons.

From 1990 to 1995, Corbin portrayed former astronaut and local business leader Maurice Minnifield on CBS's Northern Exposure, for which he received an Emmy Award nomination.[6]

In 1994, Corbin narrated the acclaimed TBS documentary MoonShot, telling the story of the 1960s space race from the first-person viewpoint of Mercury Seven astronaut Deke Slayton. In 2007, he played the character Clay Johnson, father of Deputy Chief Brenda Leigh Johnson on The Closer series.[6]

From 2003-2008, Corbin played Whitey Durham, the basketball coach for the Tree Hill Ravens on The WB/CW teenage drama series One Tree Hill.[6] He also had a role in 2008's Oscar-winning film No Country for Old Men. Corbin lost most of his hair in the 1990s due to alopecia areata. Since then, he has played various roles with a shaved head, wearing a cowboy hat, or occasionally wearing a full toupee. Corbin is the signature voice of radio station KPLX in Fort Worth, Texas, and has also voiced trailers and promos for CMT and various other country radio stations.[7] In 2014 he became the spokesman for The Texas Veterans Land Board.

Before breaking into film, Corbin won many cutting-horse competitions.[3] Much of his spare time is spent riding horses and tending to cattle on his small Texas ranch near Fort Worth. He has volunteered his time to charity for many years, including rodeos and being spokesman for the National Alopecia Areata Foundation.[3] In 2006, he participated in the Lubbock centennial.[12]

Corbin lives on the ranch with his daughter, Shannon Ross (born 1965) and grandchildren. Shannon had been adopted as an infant; her birth mother, who had an affair with Corbin, gave up the child through the Methodist Mission Home in San Antonio, without having told Corbin of the pregnancy. Corbin found Shannon in June 1991, when she was twenty-six. Corbin has three sons: Bernard Weiss (born 1970), Jim Corbin (born 1979), and Christopher Corbin (born 1982). Christopher goes on to follow in his father's footsteps as an actor. Bernard was adopted by the Weiss family and later in life got in touch with Corbin. He and his second wife, Susan Berger, divorced in 1992.[5]

In 2009, Corbin was inducted into the Texas Cowboy Hall of Fame in Fort Worth. A recent painting of Corbin has been placed at the museum exhibit.[13] Corbin has appeared at gatherings of the American Cowboy Culture Association, which holds the annual National Cowboy Symposium and Celebration each September in Lubbock.[14]

In September 2011, Corbin was given a Lifetime Achievement Award by the Estes Park Film Festival in Estes Park, Colorado.[15] The Texas Film Hall of Fame inducted Corbin into its membership on March 8, 2012.[3]