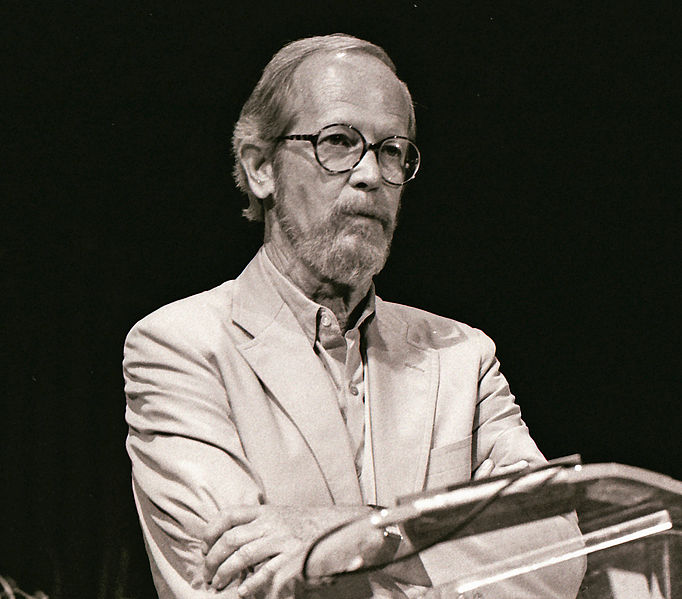 Elmore John Leonard Jr. (October 11, 1925 – August 20, 2013) was an American novelist, short story writer, and screenwriter. His earliest novels, published in the 1950s, were Westerns, but he went on to specialize in crime fiction and suspense thrillers, many of which have been adapted into motion pictures.

Among his best-known works are Get Shorty, Out of Sight, Swag, Hombre, Mr. Majestyk, and Rum Punch (adapted as the movie Jackie Brown). Leonard's writings include short stories that became the films 3:10 to Yuma and The Tall T, as well as the FX television series Justified.

Leonard was born in New Orleans, Louisiana, the son of Flora Amelia (née Rive) and Elmore John Leonard, Sr.[3] Because his father worked as a site locator for General Motors, the family moved frequently for several years. In 1934, the family settled in Detroit.

He graduated from the University of Detroit Jesuit High School in 1943 and, after being rejected for the Marines for weak eyesight, immediately joined the Navy, where he served with the Seabees for three years in the South Pacific (gaining the nickname "Dutch", after pitcher Dutch Leonard).[4] Enrolling at the University of Detroit in 1946, he pursued writing more seriously, entering his work in short story contests and sending it off to magazines. He graduated in 1950[5] with a bachelor's degree in English and philosophy. A year before he graduated, he got a job as a copy writer with Campbell-Ewald Advertising Agency, a position he kept for several years, writing on the side.[5]

Leonard got his first break in the fiction market during the 1950s, regularly publishing pulp Western novels. Leonard had his first success in 1951 when Argosy published the short story "Trail of the Apaches".[6] During the 1950s and early 1960s, he continued writing Westerns, publishing more than 30 short stories. He wrote his first novel, The Bounty Hunters, in 1953 and followed this with four other novels. Five of his westerns were turned into major movies before 1972:[7] The Tall T[8] (Randolph Scott), 3:10 to Yuma[9] (Glenn Ford), Hombre[10] (Paul Newman), Valdez Is Coming[11] (Burt Lancaster), and Joe Kidd[12] (Clint Eastwood).

He went on to write seventeen novels and stories in the mystery, crime, and more topical genres which were made into movies between 1969 and 2013.[citation needed]

In 1985, his breakout novel, Glitz was published. At the time of his death he had sold tens of millions of copies of his novels.[13]

Among film adaptations of his work are Jackie Brown (starring Pam Grier, directed by Quentin Tarantino) which is a "homage to the author’s trademark rhythm and pace";[13] Get Shorty (1995, John Travolta and Gene Hackman); and Out of Sight (1998, George Clooney and Jennifer Lopez, directed by Steven Soderbergh).[14]

Leonard spent the last years of his life with his family in Oakland County, Michigan. He suffered a stroke on July 29, 2013. Initial reports stated that Leonard was recovering,[19] but on August 20, 2013, Leonard died at his home in the Detroit suburb of Bloomfield Hills of stroke complications.[20] He was 87 years old.[16] Leonard is survived by his five children, 13 grandchildren, and five great-grandchildren.[17]

Commended by critics for his gritty realism and strong dialogue, Leonard sometimes took liberties with grammar in the interest of speeding the story along.[21] In his essay "Elmore Leonard's Ten Rules of Writing" he said: "My most important rule is one that sums up the 10: If it sounds like writing, I rewrite it." He also hinted: "I try to leave out the parts that readers tend to skip."[21]

Elmore Leonard has been called "the Dickens of Detroit" because of his intimate portraits of people from that city, though he said, "If I lived in Buffalo, I'd write about Buffalo."[6] His favorite epithet was one given by Britain's New Musical Express: "the poet laureate of wild assholes with revolvers".[22] His ear for dialogue has been praised by writers such as Saul Bellow, Martin Amis, and Stephen King. "Your prose makes Raymond Chandler look clumsy," Amis told Leonard at a Writers Guild event in Beverly Hills in 1998.[23] Stephen King has called him "the great American writer."[24] According to Charles Rzepka of Boston University, Leonard's mastery of free indirect discourse, a third-person narrative technique that gives the illusion of immediate access to a character's thoughts, "is unsurpassed in our time, and among the surest of all time, even if we include Jane Austen, Gustave Flaubert, and Hemingway in the mix." [25]

Leonard often cited Ernest Hemingway as perhaps his single most important influence, but at the same time criticized Hemingway for his lack of humor and for taking himself too seriously.[26] Still, it was Leonard's affection for Hemingway, as well as George V. Higgins, that led him to will his personal papers to the University of South Carolina, where many of Hemingway's and Higgins' papers are archived. Leonard's papers reside at the university's Irvin Department of Rare Books and Special Collections.[27][28][29]

Twenty-six of Leonard's novels and short stories have been adapted for the screen (19 as motion pictures and another seven as television programs).

Aside from the short stories already noted, a number of Leonard's novels have been adapted as films, including Get Shorty (1990 novel, 1995 film), Out of Sight (1996 novel, 1998 film), and Rum Punch (1992 novel, 1997 film Jackie Brown). 52 Pick-Up (1986 film) was first adapted very loosely into the 1984 film The Ambassador (1984), starring Robert Mitchum and, two years later, under its original title starring Roy Scheider. Leonard has also written several screenplays based on his novels, plus original screenplays such as Joe Kidd (1972).

The film Hombre (1967), starring Paul Newman, was an adaptation of Leonard's 1961 novel of the same name.

Other novels filmed include: