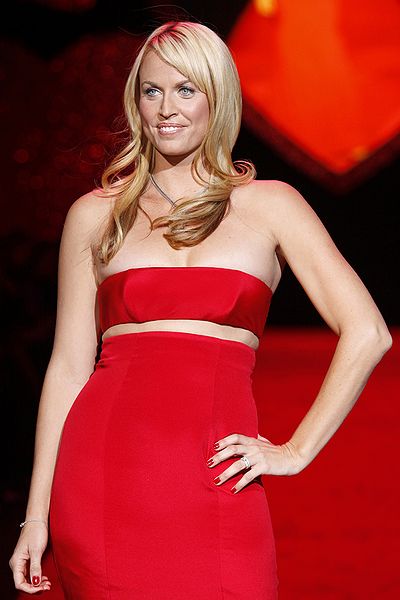 Beard's success has earned her the American Swimmer of the Year Award twice. She has won a total of twenty-one medals in major international competition, five gold, thirteen silver, and three bronze spanning the Olympics, the World Championships, the Pan Pacific Championships, and the Summer Universiade.

At the age of 14, Beard made her first Olympic appearance at the 1996 Summer Olympics in Atlanta, while still a student at Irvine High School in Irvine, California.[1] She was often photographed clutching her teddy bear, even on the medal stand. Beard became the second-youngest Olympic medalist in American swimming history when she won three medals in Atlanta—one gold and two silver.[2]
Read more...

At the 2000 Summer Olympics in Sydney, Australia, Beard won a bronze a medal in the 200-meter breaststroke.[3]

Beard attended the University of Arizona, where she competed for the Arizona Wildcats swimming and diving team. She won an individual NCAA Division I championship in 2001. In 2003, she became the world champion and American record-holder in the 200-meter breaststroke.

At the 2008 U.S. Olympic Swim Trials, Beard finished second in the 200-meter breaststroke event, and she qualified for her fourth consecutive Olympics. On July 30, 2008, at the U.S. swimming team's final training in Singapore, Beard, together with Dara Torres and Natalie Coughlin, were elected co-captains of the U.S. Olympic women's swimming team.[5]

In Beijing, Beard failed to reach the semi-finals in the 200-meter breaststroke, placing 18th in the preliminaries.

In August 2010, she came out of retirement to compete at the 2010 Conoco Phillips National Championships. She finished second in the 200-meter breaststroke finals at 2:26.50, qualifying her for the Pan Pac team to represent the United States later in the month.

Beard failed to qualify for the 2012 Olympic team after finishing 5th in the 200-meter breaststroke at the Olympic swimming trials.[8]

Her modeling work has included appearances in FHM,[9] the 2006 Sports Illustrated Swimsuit Edition, and the July 2007 issue of Playboy magazine, in which she posed nude.[10]

She is a spokeswoman for Defenders of Wildlife, and enjoys interior decorating. Both of her sisters, Leah and Taryn, are swimmers. Amanda placed eighth in the Toyota Grand Prix of Long Beach Celebrity car race in 2006.

In November 2007, Beard made her first television commercial for GoDaddy entitled "Shock". It featured her "flashing" the seven Olympic medals she won from 1996-2004. Mark Spitz made a cameo appearance.[11]

In 2008, Beard participated in an anti-fur campaign for the organization People for the Ethical Treatment of Animals (PETA). She was photographed nude (again covering her breasts and not exposing her nipples) in front of an American flag. The flag in that photograph is hung incorrectly according to the United States Flag Code with the blue field to the upper right.[13] Shortly after the PETA campaign was released, accusations of hypocrisy surfaced. Beard had told a fashion blogger the year before that her favorite shoes were leather sandals, and she had stated during an interview with SmartMoney magazine that she would never buy a low-quality leather jacket.[14]

After achieving an athletic scholarship to the University of Arizona, Beard began to struggle with bulimia nervosa.[16] Stress from wearing a swimsuit in front of others as well as seeing the photo-shopping process of her ads caused Beard to desire having a body which matched that in her photos. Beard has further claimed that "even if the purging had hurt my swimming, I wouldn't have stopped. I wanted to be a great swimmer, but more than that, I wanted to be pretty, skinny, and perfect."[21]

Beard released an autobiography on April 3, 2012, entitled In the Water They Can't See You Cry: A Memoir.[22] She explains the title's significance as the sensation of putting her face in the water while swimming to hide any tears she shed into her goggles.[21] The book cites her parents' divorce at the age of 12 as the beginning of her personal struggles,[16] as well as her perfectionist nature.[22] In the memoir, Beard chronicles struggles with self-mutilation, depression and drug use. She credits Brown with encouraging her to seek therapy.[16]