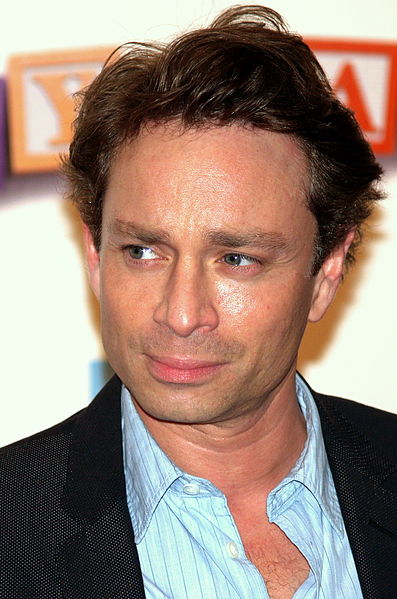 Christopher Lee Kattan (/kəˈtæn/; born October 19, 1970) is an American actor and comedian, best known for his work as a cast member on Saturday Night Live, his role as Bob on the first four seasons of The Middle, for playing Doug Butabi in A Night at the Roxbury and Bunnicula in Bunnicula.

Kattan was born in Culver City, California.[1] His father, Kip King (1937-2010), was an actor and voice actor. His mother, Hajnalka E. Biro, was once photographed for Playboy and worked as a model in London.[2] His father was Jewish, from a family from Iraq. His mother, a native of Budapest, Hungary, is a Buddhist.[2][3] His stepfather was a Buddhist therapist and monk.[4] His half-brother, Andrew Joslyn, is a professional musician and composer.[5] Kattan was raised on a Zen retreat on Mount San Antonio (Mount Baldy), outside Los Angeles.[4] He lived on Bainbridge Island, Washington, where he attended Bainbridge High School, and graduated in 1989.
Read more...

Kattan was a member of several improvisational comedy (improv) and sketch comedy troupes, one of them being The Groundlings in Los Angeles. His father was an original member of the troupe.[6] Kattan also did some minor roles on TV, including the second episode of the second season of NewsRadio, "No, This Is Not Based Entirely on Julie's Life," as a photo shop employee.

He moved to New York City to work on Saturday Night Live from 1996 to 2003. His recurring characters included Mr. Peepers, Mango, Azrael Abyss, Kyle DeMarco from The DeMarco Brothers, Gay Hitler, Suel Forrester (known for the term "dagitybo") and, most notably, one half of the Butabi Brothers with fellow SNL (and Groundlings) cast member Will Ferrell, known for their trademark head-bobbing. Kattan and Ferrell continued the characters in the 1998 film A Night at the Roxbury.

Kattan on August 19, 1999 (after Lorne Michaels received his star on the Walk of Fame)

Kattan was to play Xanthias in the Broadway theatre production of Stephen Sondheim's The Frogs but he was replaced during previews by Roger Bart.[7] Kattan was set to host the game show Gameshow In My Head and even filmed the pilot episode in Hollywood.[8] However, he was replaced with Joe Rogan for the series. Kattan appeared in a Diet Pepsi Max commercial during Super Bowl XLII in 2008 that featured the song What Is Love and had many actors in the commercial performing the head bob from A Night at the Roxbury.

In August 2009, Kattan starred in the Independent Film Channel (IFC) miniseries Bollywood Hero, where he portrays himself and the difficulties he faces after a career as a comic actor, trying to attain leading man status.[9] Starting in fall of 2009, Kattan appeared in a supporting role in The Middle. Kattan played Bob, a colleague of Frankie Heck's at Mr. Ehlert's car dealership. Kattan appeared in an episode of How I Met Your Mother as a star in "The Wedding Bride", a fictional movie within the show. He played himself acting as Jed Mosely, a character based on the main character Ted with an arrogant personality. He reappeared as the character while the gang was watching its sequel, Wedding Bride 2.[10] On December 17, 2011, Kattan made a guest appearance on Saturday Night Live's Christmas show, hosted by Jimmy Fallon and again briefly on the final episode of SNL's 37th season.

In January 2014, Kattan was a cast contestant who was eliminated 1st in episode 2 of Rachael vs. Guy: Celebrity Cook-Off (hosted by Guy Fieri and Rachael Ray). In June 2014, Kattan reprised his role as former SNL character Mango in a preview of Missy Elliott protégée Sharaya J's "Shut It Down" via a T by Alexander Wang campaign.[11]

In 2017, Kattan was a contestant on season 24 of Dancing with the Stars paired with professional dancer Witney Carson. He was the first celebrity dancer eliminated.[12]

Report a problem
Write to Chris Kattan at FanPal • 2021