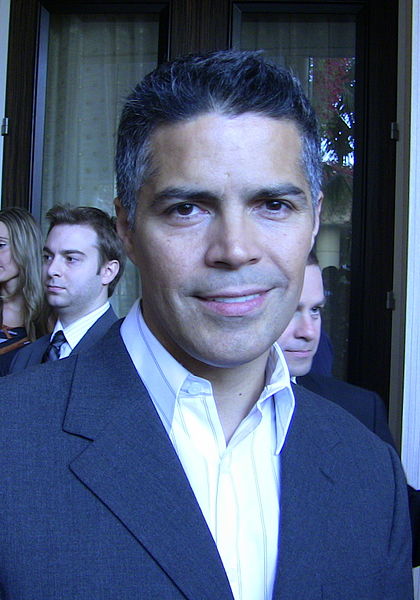 Esai Manuel Morales, Jr. (born October 1, 1962) is an American actor. He played Bob Morales in the 1987 biopic La Bamba. He also appeared in the PBS drama American Family and in the Showtime series Resurrection Blvd. He is best known for his roles as Lt. Tony Rodriguez on NYPD Blue, Joseph Adama in the science fiction television series Caprica, and Camino del Rio in the Netflix series Ozark.

Of Puerto Rican descent, Morales was born in Brooklyn, New York, to Esai Morales, Sr., a welder, and Iris Margarita (née Declet), a union activist involved with the International Ladies' Garment Workers' Union.[3] Morales began his pursuit of an acting career by attending the School of Performing Arts in Manhattan.[4]
Read more...

His first professional performances were in theater and television in New York. His first film was Bad Boys (1983), about rival teenagers sentenced to a juvenile correction facility. Morales appeared in a 1985 episode of the TV series Fame. He co-starred with Burt Lancaster in the 1986 NBC miniseries On Wings of Eagles, playing the Iranian Rashid, the hero of a true story about Ross Perot. Morales also appeared in Miami Vice, The Equalizer, and 24.

Some of his other roles have reflected his socio-political interests, such as The Burning Season in 1994, My Family/Mi Familia in 1995, The Disappearance of Garcia Lorca (1997) and Southern Cross (1999).[5] In the latter three films, as well as in others such as Bloodhounds of Broadway (1989) and Rapa Nui (1994), Morales saw increased amounts of screen time, starting with a role in the Pauly Shore film In The Army Now (1994). He portrayed a police officer in the film Dogwatch (1996) and Father Herrera in The Virgin of Juarez (2006).[6]

In the 1990s, he guest-starred on episodes of The Outer Limits, Tales from the Crypt, and two shorter-lived series, L.A. Doctors and The Hunger. He appeared in a two-part episode of Family Law in 2000. He was part of the main cast of the long-running series NYPD Blue for three and a half seasons, from 2001 to 2004, as the head of the 15th precinct detective squad.

He played a drug dealer named Lulu in the 2002 film Paid in Full. In 2005, he was a voice actor in the video game True Crime: New York City, playing Sgt. Victor Navarro.

Morales was cast in the film American Fusion (2005),[7] and on June 19, 2006, he joined the cast of the Fox series Vanished, as FBI agent Michael Tyner; the series ran for one season.[8] In 2007, Morales appeared in an episode of the USA Network drama series Burn Notice, as a Cuban shopkeeper being shaken down for "protection" money by local criminals. In early 2008, Morales had a role in the CBS drama Jericho, as Major Edward Beck. He appeared in all seven episodes of the shortened second season That same year, he appeared in Kill Kill Faster Faster, a film noir based on the novel of the same name by Joel Rose.

In May 2008, it was announced that Morales would play the role of Joseph Adama in the science fiction television series Caprica – Syfy's prequel to the series Battlestar Galactica.[9][10] The series, though highly anticipated, only ran for one season in 2010. In 2009, he served as an official festival judge for the Noor Iranian Film Festival in Los Angeles.[citation needed]

In 2011, Morales starred in the drama film Gun Hill Road as Enrique,[11] and in the web drama Los Americans airing on PIC.tv.[12] and Morales worked with Tony Plana, Yvonne DeLaRosa, Lupe Ontiveros, and JC Gonzalez in Los Americans, an Internet program launched in May 2011. In March 2015 Robert Rodriguez cast him as Lord Amancio Malvado for the horror drama series From Dusk till Dawn: The Series.,[13]

In 2017, Morales was cast in the Netflix original series Ozark. He was also cast in How to Get Away with Murder, as Jorge Castillo.

In 2005, Morales (along with Mercedes Ruehl) received the Rita Moreno HOLA Award for Excellence from the Hispanic Organization of Latin Actors (HOLA).

He received the Lifetime Achievement Award from the Arpa Foundation for his impact as an actor and role model.

Morales has described himself as an "actorvist",[14] primarily as one of the founders of the National Hispanic Foundation for the Arts, taking inspiration from his mother, who was an organizer for the International Ladies' Garment Workers' Union.[15] He is also interested in environmental issues and was a founding board member of E.C.O. (Earth Communications Office).[16]

In a February 28, 2007, all-star benefit reading of The Gift of Peace at UCLA's Freud Playhouse, he portrayed a hopeful member of a struggling immigrant family, performing alongside actors Ed Asner, Barbara Bain, Amy Brenneman, George Coe, Wendie Malick, and James Pickens, Jr.. The play was an open appeal and fundraiser for passage of U.S. House Resolution 808, which sought to establish a Cabinet-level "Department of Peace" in the U.S. government, to be funded by a two percent diversion of the Pentagon's annual budget.[17]

Morales is a vegetarian.[18] He and his girlfriend Elvimar Silva had a daughter, Mariana Oliveira, on September 24, 2010.[19]

Morales' first name is frequently used in crossword puzzles, because its rare construction makes it a prize for crossword constructors (it is a four-letter word in English that is 75 percent vowels, including the first and last letters). One crossword clue website estimated that between 1994 and 2016, "ESAI" had been used as a crossword answer over 100 times in American papers such as The Los Angeles Times, The New York Times, and The Washington Post.[20]