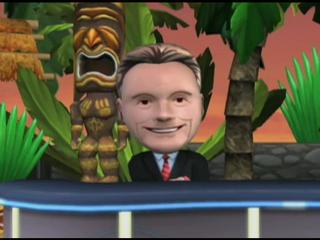 Born in Chicago on October 26, 1946,[1] Sajak was also raised there, the son of Joyce Helen (Brandecka) and Leonard Anthony Sajdak, a factory worker, who died when Sajak was young. All of his grandparents were Polish. His mother remarried Walter Backal.[2] Sajak graduated from Farragut High School in 1964, then went to Columbia College Chicago while working as a desk clerk at the Palmer House hotel.[3]

He served in the US military as a disc jockey during the Vietnam War for American Forces Vietnam Network.[4] Sajak hosted the same Dawn Buster radio show that Adrian Cronauer had, and for 14 months followed Cronauer's tradition of signing on with "Good Morning Vietnam!"[5]

Sajak won a contest on WLS radio's Dick Biondi Show to be a guest teen deejay. While at Columbia College Chicago, his broadcasting instructor Al Parker told him that a local radio station (WEDC) was looking for a newsman. Sajak applied for the job and was hired to work from midnight to 6:00 AM. In 1968, Sajak joined the US Army and was sent to Vietnam, where he served as a disc jockey on Armed Forces Radio. On The Military Channel's program, An Officer and a Movie, Sajak admitted to botching President Richard Nixon's 1969 Christmas broadcast to the troops; he accidentally cut the feed off prematurely. Upon realizing the error, he decided it would be best not to resume the feed. In the early 1970s, Sajak DJed for a Murray, Kentucky, radio station for a year.[6] Also in the early 1970s, Sajak began DJ'ing at 50,000-watt WSM in Nashville; at the time WSM was playing pop music during the day, and he was the 3:00-5:00pm afternoon personality. The radio station's television sister, WSM-TV (now WSMV), brought Sajak on screen, first as a voiceover artist doing station identifications and anchoring the five-minute newscasts during NBC's Today Show, then as a weekend and substitute weatherman, where he became acquainted with anchor Dan Miller. In 1977 KNBC-TV in Los Angeles was looking for a weatherman, and spotted Sajak working in Nashville. Sajak accepted KNBC's request for him to be a full-time weatherman for the station.

In 1981, Merv Griffin asked Sajak if he would be interested in taking over the duties as host on Wheel of Fortune from Chuck Woolery. However, Fred Silverman, then president and CEO of NBC, rejected his hiring, claiming he was too local, and Griffin responded by imposing a moratorium on new tapings until Sajak was hired.[7] The issue became moot when Silverman was dismissed due to repeated programming failures and replaced by Brandon Tartikoff. Sajak, who had already hosted two game show pilots in 1980, Press Your Luck for Ralph Edwards (no relation to the 1983 CBS game show of the same name) and Puzzlers for Mark Goodson, accepted the position. He hosted both the daytime (NBC) and syndicated evening versions of Wheel from 1983 to 1989, and continues to host the latter version.

Sajak had a small role as a Buffalo, New York, newscaster in the 1982 comedy film Airplane II: The Sequel. When his late-night talk show on CBS premiered in January 1989, he left the daytime version of Wheel, and was replaced by former San Diego Chargers place-kicker Rolf Benirschke. Sajak appeared on Super Password several times from 1984 to 1989, as well as Password Plus in 1981, shortly before taking on hosting duties on Wheel. Other game shows on which Sajak guested were Dream House and Just Men!.

Sajak was grand marshal of the National Memorial Day Parade in 2011.[8]

Sajak is an External Director of conservative publishing house Eagle Publishing[11] and is on the board of trustees at Hillsdale College in southern Michigan, currently as vice chairman.[12] He has written for Human Events and served on the board of directors for the Claremont Institute.

In 1983, Sajak portrayed Kevin Hathaway in the NBC daytime soap opera Days of Our Lives.

In 1993, Sajak appeared as himself on the popular children's cartoon show Rugrats.[13]

In 1997, Sajak pulled an April Fool's Day prank on fans when he and Vanna White were contestants on an episode of Wheel hosted by Alex Trebek. Both the winnings of Sajak and White were donated to charity (in this case, the American Cancer Society and the Boy Scouts of America). In return, Sajak hosted a regular episode of Jeopardy! in place of Trebek. He also appeared at the beginning of a 2010 April Fool's episode, along with Jeff Probst and Neil Patrick Harris.

In 2001, he appeared as himself in the episode "Inner Tube" on the sitcom The King of Queens.

Sajak began writing for the National Review Online in 2010. In his first post he questioned whether public employees should be allowed to vote on issues that would benefit them directly.[14][15] He also has contributed to the center-right socio-political / social networking website, Ricochet.com.[16]

Sajak also is the author of several puzzle games, the first and best-known of them being "Lucky Letters", which debuted in 2007. The games, which Sajak developed with puzzle developer David L. Hoyt, are syndicated through Universal Uclick.[17]

Sajak has also appeared on episodes of ESPN radio's The Dan Le Batard Show with Stugotz, as well as Le Batard's other show, Highly Questionable.[18][19]

Sajak with Vanna White in 2006

Pat Sajak was parodied in a 1980s Sesame Street sketch, with a Muppet named Pat Playjacks hosting "Squeal of Fortune". The goal was for the contestants (Prairie Dawn and The Count) to guess how many times a pig in the center of the wheel would squeal before the wheel stopped.[21]

During the 1980s comedian Martin Short frequently portrayed on the sketch comedy television shows SCTV and Saturday Night Live a fictional character he called Ed Grimley, a hyperactive manchild who is obsessed with banal popular culture, Sajak in particular.

In an episode[which?] of the 1993 animated series, Animaniacs, Wakko refers to Yakko as Pat. Yakko then replies with "Wrong wheel", a reference to Sajak and the Wheel of Fortune game show he hosts.

In the fourth episode of season three of Comedy Central's Brickleberry, "That Brother's My Father", Pat Sajak gets kidnapped and becomes a hostage to the wheel of fortune.

In the 1994 Rugrats episode "Chuckie is Rich", Pat Sajak awards Chaz with $10 million.

In 1992, Sajak was a special guest star in the TV show The Commish. The episode first aired on November 7, 1992, and was called "The Two Faces Of Ed". He played the psychologist Brian Brandon.

Sajak is married to Lesly Brown Sajak, a photographer, with whom he has a son, Patrick Michael James Sajak (born September 22, 1990), and a daughter, Maggie Marie Sajak (born January 5, 1995). The couple lives in Severna Park, Maryland,[22] with a second home in Los Angeles, California.[23]

In 2005, Sajak became an investor in the Golden Baseball League, a professional, independent baseball league with teams in California, Arizona, Nevada, Utah, Alberta, British Columbia, and Baja California.[24][25] During a guest appearance in the broadcast booth at a March 2012 Baltimore Orioles - Boston Red Sox spring training game,[26] Sajak acknowledged that he had called some baseball games in the past.

Sajak is featured in a brief film shown at the visitor's center at Mount Vernon, the residence of George Washington, where he explains to tourists the attractions of the site.[27][28] Sajak owns Maryland-based AM radio station WNAV in Annapolis (since 1998).

Sajak has written a number of columns for the conservative magazine Human Events.[29] According to NEWSMEAT, Sajak has donated over $17,000 to candidates and election committees, all associated with the Republican Party.[30] Sajak is also a regular poster and podcast participant on the conservative blog ricochet.com.[31] He has long acknowledged being a climate change skeptic.[32] He is also a financial supporter of the Young America's Foundation, which sponsors conservative speakers on college campuses.[33]

Sajak is a member of the Churches of Christ.[34]