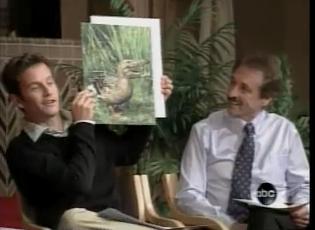 Kirk Thomas Cameron (born October 12, 1970)[2] is an American actor. He is known for his role as Mike Seaver on the ABC sitcom Growing Pains (1985-92), a role for which he was nominated for two Golden Globe Awards.

As a child actor, Cameron made several other television and film appearances through the 1980s and 1990s, including the films Like Father Like Son (1987) and Listen to Me (1989). In the 2000s, he portrayed Cameron "Buck" Williams in the Left Behind film series and Caleb Holt in the drama film Fireproof (2008). His 2014 film, Saving Christmas, was panned by critics and peaked the IMDb Bottom 100 List within one month of its theatrical release.[3]

Cameron is also an active Evangelical Christian, partnering with Ray Comfort in the evangelical ministry The Way of the Master, and has co-founded The Firefly Foundation with his wife, actress Chelsea Noble.

Cameron was born in Panorama City, California, a suburb of Los Angeles.[4] His parents are Barbara (née Bausmith) and Robert Cameron, a retired schoolteacher.[5] He is the brother to Bridgette, Melissa, and actress Candace Cameron Bure, who is most notable for her role as D.J. Tanner on the television sitcom, Full House.[6] He went to school on the set of Growing Pains, as opposed to public school.[7] He graduated from high school at age 17 with high honors.[8]
Read more...

Cameron at the Emmy Awards in 1989

Cameron began acting at age nine, and his first job was in an advertisement for a breakfast cereal.[9][not in citation given] His first starring role was at age 13, in the television series Two Marriages.[10] At this age, he appeared in several television shows and films. He became famous in 1985 after being cast as Mike Seaver in the ABC television sitcom Growing Pains.[11] In the series, Mike would eventually have a girlfriend named Kate MacDonald, played by Chelsea Noble, Cameron's future wife.[12][13] Cameron subsequently became a teen heartthrob in the late 1980s,[14] while appearing on the covers of several teen magazines, including Tiger Beat, Teen Beat, 16 and others. At the time, he was making $50,000 a week.[15] He was also in a 60-second Pepsi commercial during Super Bowl XXIV.[16]

Cameron also guest-starred in the 1988 Full House episode "Just One of the Guys", in which he played the cousin of D.J. Tanner, the role played by Cameron's sister, Candace.

Cameron went on to star in many films, including the 1987's Like Father Like Son[17] (a body-switch comedy with Dudley Moore), which was a box office success.[18] His next theatrical film, 1989's Listen to Me, performed poorly at the box office.[19] When Growing Pains ended in 1992, Cameron went on to star in The WB sitcom Kirk which premiered in 1995 and ended two years later. In Kirk, Cameron played Kirk Hartman,[20] a 24-year-old who has to raise his siblings.[21] Cameron and Noble also worked together on Kirk.[13]

Cameron has since mostly left mainstream film and television, though a decade after Growing Pains ended, he starred in a television reunion film, The Growing Pains Movie,[22] in 2000, and another one, Growing Pains: Return of the Seavers, in 2004.[23] Cameron reunited with the cast of Growing Pains for a CNN Larry King Live interview which aired on February 7, 2006, in conjunction with the Warner Bros. release of the complete first season of Growing Pains on DVD.[24] Aside from this, Cameron has often worked in Christian-themed productions, among them the post-Rapture films Left Behind: The Movie, Left Behind II: Tribulation Force, and Left Behind: World at War, in which he plays Cameron "Buck" Williams. Cameron's wife Noble also starred in the film series,[25] playing Hattie Durham. Cameron has worked with Cloud Ten Pictures, a company which produces Christian-themed films, and has starred in several of their films, including The Miracle of the Cards.[26]

He also appeared in the 2008 drama film, Fireproof,[27] which was produced by Sherwood Pictures. The film was created on a budget of $500,000, with Cameron as the lead actor, portraying Captain Caleb Holt.[28] Though it was a low-budget film, the film grossed $33,415,129 and was a box office success. It was the highest grossing independent film of 2008.[29]

In 2013, Cameron announced he would be the host of the film Unstoppable slated to premiere September 24, 2013. A trailer for the film was blocked on Facebook, with Cameron speculating that it was due to the film's religious content. Facebook has since removed the block, stating it was the result of a mistake by an automated system and a spam site previously registered at the same web address.[31]

In 2014, Cameron starred in the Christian-themed comedy film Saving Christmas. The film was panned by critics,[32] winning the 2014 Golden Raspberry Award for Worst Picture and Worst Screenplay. Cameron also won the award for Worst Actor and Worst Screen Combo, which he won with "his ego".[33]

Cameron currently partners with fellow evangelist Ray Comfort, training Christians in evangelism. Together, they founded the ministry of The Way of the Master,[34] which is best known for the television show of the same name that Cameron co-hosts, and which won the National Religious Broadcasters’ Best Program Award for two consecutive years.[35] It also formerly featured a radio show known as The Way of the Master Radio with talk show host Todd Friel.[36] The radio show was later canceled, and replaced with Wretched Radio, hosted by Friel. Cameron, along with his wife, founded The Firefly Foundation, which runs Camp Firefly, a summer camp that gives terminally ill children and their families a free week's vacation.[37][38]

Cameron and Comfort participated in a televised debate with atheists Brian Sapient and Kelly O'Conner of the Rational Response Squad, at Calvary Baptist Church, in Manhattan, on May 5, 2007. It was moderated by ABC's Martin Bashir and parts of it were aired on Nightline. At issue was the existence of God, which Comfort stated he could prove scientifically, without relying on faith or the Bible.[39] The audience was composed of both theists and atheists. Points of discussion included atheism and evolution.[40] While Sapient contended during his arguments that Comfort violated the rules by talking about the Ten Commandments, Cameron later stated on The Way of the Master radio show that the rules of the debate did not say that the Bible could never be referenced, but rather that Comfort simply had to come up with one argument that did not reference the Bible or faith.[41]

In November 2009 Cameron and others distributed free copies of an altered version of Charles Darwin's On the Origin of Species on college campuses in the United States.[42][43] The book consisted of Darwin's text with chapters of the book removed, and with an added introduction by Ray Comfort reiterating common creationist assertions about Darwin and evolution. The book was criticized by scientists and Darwin biographers who criticized the omission of key chapters of the book, and who stated that its introduction contains misinformation about Darwin, and long-refuted creationist arguments about the science of evolution,[44][45] such as the linking of Nazi racial theories to Darwinist ideas.[43] Comfort later said that the four chapters were chosen at random to be omitted in order to make the book small enough to be affordable as a giveaway, with the absent chapters available for download, but that the missing chapters were included in the second edition, which had a smaller text size that made printing the entire book as a giveaway affordable. The second edition still lacks Darwin's preface and glossary of terms.[46] The National Center for Science Education arranged a campaign to distribute an analysis of the Comfort introduction and a banana bookmark at colleges across the U.S., a reference to Comfort's presentation of the banana as an argument for the existence of God.[47]

On March 2, 2012, Cameron stated on CNN's Piers Morgan Tonight, when asked about homosexuality, that it is "...unnatural, it's detrimental and ultimately destructive to so many of the foundations of civilization".[48] Cameron's comments received criticism from GLAAD,[49] and provoked a backlash from gay rights activists and Hollywood celebrities, including Roseanne Barr, Craig Ferguson, Jesse Tyler Ferguson, as well as Growing Pains co-stars Tracey Gold and Alan Thicke. Piers Morgan stated that Cameron was brave for expressing his opinion, "however antiquated his beliefs may be". He, however, received "thousands of emails and comments" from supporters.[50][51] Rosie O'Donnell invited him to discuss his views on her talk show, but he declined and suggested a private dinner to discuss this topic personally.[52]

On April 11, 2012 Cameron was honored by Indiana Wesleyan University, and inducted into their Society of World Changers during a ceremony in which he spoke on IWU's campus.[53]

Cameron was an atheist in his early teens.[55][non-primary source needed] When he was 17, during the height of his career on Growing Pains, he became a born-again Christian.[15][56][57]

After converting to Christianity, he began to insist that storylines be edited to remove anything he thought too adult or inappropriate in Growing Pains.[58]

After the series was cancelled, Cameron did not maintain contact with his former co-stars, and did not speak to Tracey Gold for eight years. Cameron has stated that this was not due to any animosity on his part toward any of his former cast-members, but an outgrowth of his desire to start a new life away from the entertainment industry, and the life he had been in for the previous seven years.[59]

Prior to the premiere of The Growing Pains Movie in 2000, for which the entire main cast reunited, Cameron described his regrets over how his relationship with his castmates changed after his religious conversion during production of the series, saying, "I definitely kind of made an about-face, going toward another aspect of my life", admits Cameron. "I shifted my focus from 100% on the show, to 100% on, and left 0% on the show—and even the friendships that were a part of that show. If I could go back, I think I could make decisions that were less inadvertently hurtful to the cast—like talking and explaining to them why I just wanted to have my family at my wedding."[59]

Report a problem
Write to Kirk Cameron at FanPal • 2021