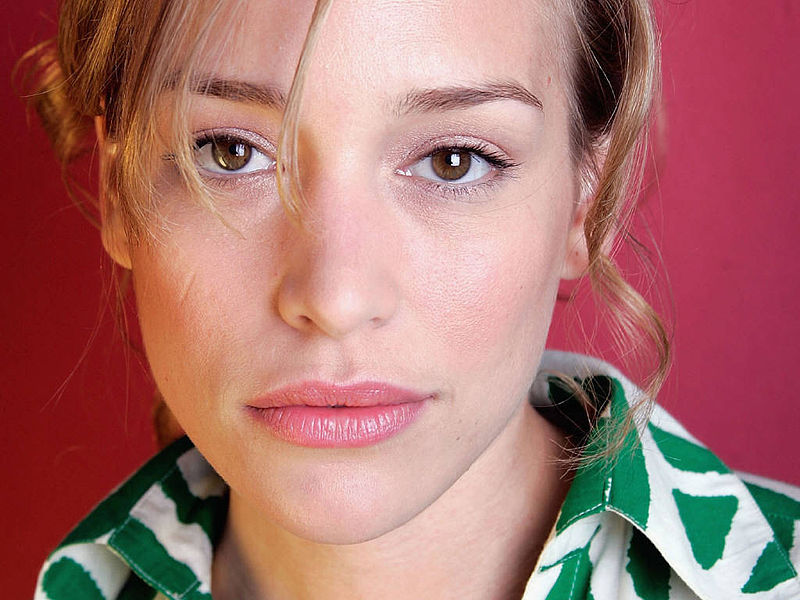 Piper Lisa Perabo (/ˈpɛrəboʊ/; born October 31, 1976)[1] is an American film and television actress. She is best known for playing CIA Agent Annie Walker in the spy drama series Covert Affairs, which ran on the USA Network for five seasons between 2010 and 2014, receiving a Golden Globe nomination.[2] Since her breakthrough starring role in Coyote Ugly (2000), Perabo has appeared in films such as Cheaper by the Dozen (2003), Cheaper by the Dozen 2 (2005), The Prestige (2006), and Looper (2012).

Perabo was born in Dallas, Texas,[3] the daughter of Mary Charlotte (née Ulland), a physical therapist, and George William Perabo, a lecturer in poetry at Ocean County College.[4] She is of English, German, Irish, Portuguese (father) and Norwegian (mother) descent; Her surname is of Portuguese origin. She grew up in Toms River, New Jersey.

Perabo's parents named her after actress Piper Laurie.[4] She is the eldest of three children with two brothers, Noah (born 1979) and Adam (born 1981). She graduated from Toms River High School North in 1994,[5] and earned a bachelor's degree in theater from Honors Tutorial College at Ohio University in 1998.[6] She also studied Latin, physics, and poetry in her final year.[7][8][9]

Perabo was first noticed a year before she graduated from college. She was in New York City, visiting her then-boyfriend, and accompanied him to an audition. Casting director Denise Fitzgerald spotted her and asked her to read for a part. She was not cast, but when Fitzgerald found out that she did not have any representation, she made phone calls on Perabo's behalf and found her an agent.[10][11]

After graduating, Perabo moved to New York, where she worked as a waitress.[12][13] She also studied acting at the La MaMa Experimental Theatre Club and had roles in various plays.[10] She was cast in her first feature film just a month after moving to the city, Marc Levin's comedy Whiteboyz.[13] In 2000, she was cast in Coyote Ugly as Violet "Jersey" Sanford, for which she won an MTV Movie Award for Best Music Moment for "One Way or Another".[14] She also appeared in The Adventures of Rocky and Bullwinkle as Everyone's Favorite FBI agent Karen Sympathy.

After the success of Coyote Ugly, Perabo decided to move away from blockbusters and focus on independent films.[15] In 2001, she starred in an independent Canadian drama called Lost and Delirious, playing a boarding school student who falls in love with a female classmate. The film received mixed reviews, but her performance was widely praised,[16] with Loren King of the Chicago Tribune calling it her "breakout performance".[17] Entertainment Weekly's Owen Gleiberman called her "an actress of glittering ferocity" and her performance "a geyser of emotion".[18] Jim Lane of the Sacramento News & Review said, "Perabo is a revelation, wild and fiery - it's a breakthrough performance, astonishing in its fervency",[19] and Roger Ebert praised her performance for its sincerity and "wonderful abandon and conviction".[20]

The next year she starred as a French exchange student in the independent comedy Slap Her... She's French, which was shelved in North America for two years, then released under the new title She Gets What She Wants. The film was released under its original title in Europe. She had a role as the eldest Baker child, Nora, in Cheaper by the Dozen (2003), a role she reprised in the film's 2005 sequel. Her other films include The I Inside (2003), Perfect Opposites (2004), George and the Dragon (2004), The Cave (2005), Imagine Me & You (2005), Edison (2005), The Prestige (2006), and Beverly Hills Chihuahua (2008). She appeared as a nutritionist on the Fox show House, in an episode entitled "Resignation".

In 2008, Perabo made her off-Broadway debut in the Neil LaBute play Reasons to Be Pretty.[10][21] As the play's run was coming to an end, she read the script for the USA Network television spy series Covert Affairs: "I was reading movie scripts and I wasn't finding anything that was really speaking to me and my agent suggested that I read . And I hadn't thought about doing television, but when I read it, it kind of changed everything for me. She's such a powerful character, she's so smart, the action is so intense, and I really thought it would be fun to do."[22][23] The following year, she was cast as Central Intelligence Agency field agent Annie Walker, the lead character in Covert Affairs.[24][25]

In August 2010, Perabo injured her knee filming an episode of Covert Affairs.[26] After the finale of the first season, the second season was announced to begin in summer of 2011. For her work on Covert Affairs, she received a nomination for the 2010 Golden Globe Award for Best Actress - Television Series Drama.[27] Perabo broke her leg the day before shooting finished for the second-season finale of Covert Affairs.[28] The series ran for five seasons, from 2010 to 2015.[29]

In September 2012, Perabo had a supporting role in the time travel thriller Looper. In December 2012, she was cast as a recurring character on the sitcom Go On. Her character, Simone, is a former member of Matthew Perry's character's support group, returning to the group and becoming his love interest. Perabo was originally scheduled to appear in three episodes, but this was increased to four.[30] Perabo next had a starring role in the thriller Into the Grizzly Maze.[31] She starred as Julia George in the ABC TV series Notorious in 2016.[32]

Perabo has been close friends with actress Lena Headey since they starred together in the 2005 films The Cave and Imagine Me & You.[34] She speaks fluent French[15] and is an advocate for LGBT rights and women's political leadership and serves on the Advisory Board of VoteRunLead.[35] She is the part-owner of the prohibition-themed bar, Employees Only, in West Village, Manhattan, which opened in 2005, and the restaurant, Jack's Wife Freda, in SoHo, Lower Manhattan, which opened in 2012.[36][37]