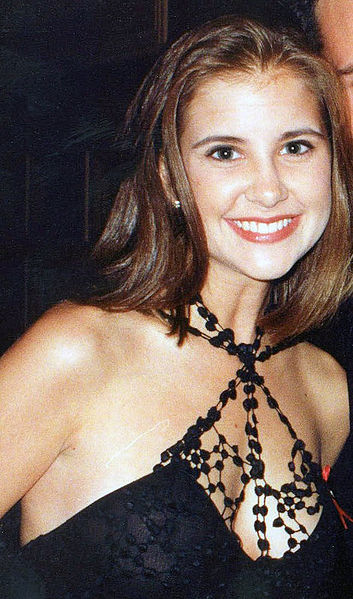 Martin was born in Riverside, California, U.S., the daughter of Debbie (Jett), a kindergarten teacher, and Doug Martin, a department store buyer and retail executive.[2]

She began her acting career at age seven, when her aunt, who was a nanny for actor Michael Landon's children, helped her land a guest spot on the Landon- produced series Father Murphy. At the age of eleven, she was a contestant during Young People's Week on Card Sharks.[3]

Martin had a recurring role on season three of Valerie's Family: The Hogans (1987-88). She also contributed the voice of Daphne Blake on the animated series A Pup Named Scooby-Doo in 1988-91. In 1989, Martin began the role of Rebecca "Becca" Thacher on the family drama Life Goes On, which ran on ABC for four seasons. She also played the role of Emily in 1989's Troop Beverly Hills, starring Shelley Long.

From 1991 to 1995, Martin supplied the voice of Molly Tasmanian Devil on Taz-Mania. In 1993, she played Sherry in Matinee, and made a guest appearance as Cleo Walker on an episode of seaQuest DSV, titled "Brothers and Sisters".

In 1994, she starred on her own series, Christy[4]. In 1994, she starred on the Lifetime movie A Friend to Die For. In 1995, she starred on The Face on the Milk Carton, a TV film based on the book by Caroline Cooney about a teenager who finds out she was kidnapped from her real family 13 years prior and had been raised by the parents of her kidnapper. She was in A Goofy Movie as the voice of Roxanne, Max's love interest.

In 1996, Martin starred as deaf abuse-victim Laura Keyes on Lifetime's TV movie After the Silence (or Breaking Through). She starred in a made for TV movie Hidden in Silence (Lifetime Television). From 1998-2000, Martin appeared on the medical drama ER as medical student Lucy Knight. Martin was still going to Yale at the time and postponed her education so that she could join the cast.[5]

In 2003, Martin starred in Mystery Woman, a Hallmark Channel movie about the owner of a mystery bookshop who solves actual crimes. From 2005 to 2007, she made ten more Mystery Woman movies for Hallmark, two of which she directed. Also in 2003, Martin had a supporting role on the comedic film Malibu's Most Wanted.

In 2006, Martin starred in the Lifetime movie Live Once, Die Twice, followed by No Brother of Mine in 2007. Also in 2007, Martin provided the voice for the adult-version of Barbara Gordon on "Artifacts", an episode of The Batman.

In 2009, Martin was a guest on Grey's Anatomy, episode "No Good at Saying Sorry." She also guest starred in the Ghost Whisperer episode "Stage Fright" as Cally O'Keefe. More recently, she has guest starred on the Private Practice episode "The Way We Were".

Martin graduated from Yale University[8] in 2001 with a degree in art history. She was a member of Saybrook College. She married Keith Christian on May 15, 1999 in his hometown of Polson, Montana. They have two daughters.[9] [10][11]

Martin owns and operates her own toy store ROMPstore.com and has authored a novel, Madam: A Novel of New Orleans from Plume.[12]