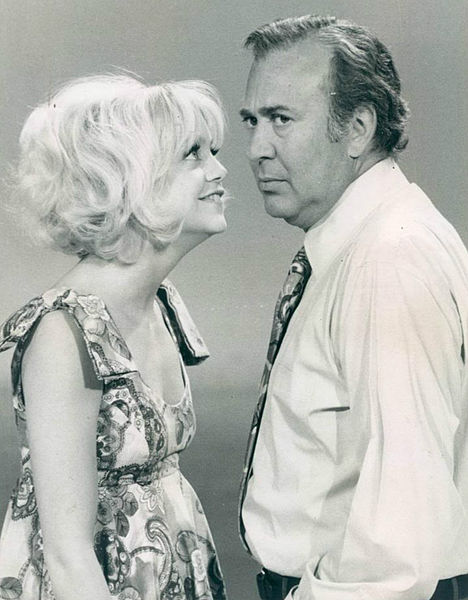 Hawn maintained bankable star status for more than three decades while appearing in films such as There's a Girl in My Soup (1970), Butterflies Are Free (1972), The Sugarland Express (1974), Shampoo (1975), Foul Play (1978), Seems Like Old Times (1980), and Private Benjamin (1980), for which she was nominated for the Academy Award for Best Actress for playing the title role.

Hawn's later work includes starring roles in the films Overboard (1987), Bird on a Wire (1990), Death Becomes Her (1992), Housesitter (1992), The First Wives Club (1996), The Out of Towners (1999) and The Banger Sisters (2002). After a fifteen-year hiatus from film acting, Hawn made a brief comeback in Snatched (2017). She is the mother of actors Oliver Hudson, Kate Hudson, and Wyatt Russell, and has been in a relationship with actor Kurt Russell since 1983. In 2003, she founded The Hawn Foundation, which helps underprivileged children.

Hawn began taking ballet and tap dance lessons at the age of three and danced in the corps de ballet of the Ballet Russe de Monte Carlo production of The Nutcracker in 1955. She made her stage debut in 1964, playing Juliet in a Virginia Shakespeare Festival production of Romeo and Juliet.[20]

By 1964, she ran and taught in a ballet school, having dropped out of American University where she was majoring in drama. In 1964, Hawn made her professional dancing debut in a production of Can-Can at the Texas Pavilion of the New York World's Fair. She began working as a professional dancer a year later and appeared as a go-go dancer in New York City[9] and at the Peppermint Box in New Jersey.[18]

Hawn moved to California to dance in a show at a theater across from Disneyland.[18] Hawn began her acting career as a cast member of the short-lived CBS situation comedy Good Morning, World during the 1967-68 television season, her role being that of the girlfriend of a radio disc jockey, with a stereotypical "dumb blonde" personality.[9]

Her next role, which brought her to international attention, was as one of the regular cast members on the 1968-1973 sketch comedy show, Rowan & Martin's Laugh-In. On the show, she would often break out into high-pitched giggles in the middle of a joke, and deliver a polished performance a moment after. Noted equally for her chipper attitude as for her bikini and painted body, Hawn was seen as something of a 1960s "It" girl.[21]

Her Laugh-In persona was parlayed into three popular film appearances in the late 1960s and early 1970s: Cactus Flower, There's a Girl in My Soup, and Butterflies Are Free. Hawn had made her feature film debut in a bit role as a giggling dancer in the 1968 film The One and Only, Genuine, Original Family Band, in which she was billed as "Goldie Jeanne", but in her first major film role, in Cactus Flower (1969), she won an Academy Award for Best Supporting Actress as Walter Matthau's suicidal fiancée.

After Hawn's Academy Award win, her film career took off. She starred in a string of above average and successful comedies starting with There's a Girl in My Soup (1970), $ (1971), and Butterflies Are Free (1972). She continued proving herself in the dramatic league with the 1974 satirical dramas The Girl from Petrovka and The Sugarland Express, and Shampoo in 1975. She also hosted two television specials: Pure Goldie in 1971 and The Goldie Hawn Special in 1978. The latter was a sort of comeback for Hawn, who had been out of the spotlight for two years since the 1976 release of The Duchess and the Dirtwater Fox, while she was focusing on her marriage and the birth of her son.

On the special she performed show tunes and comedy bits alongside comic legend George Burns, teen matinee idol Shaun Cassidy, television star John Ritter (during his days on Three's Company), and even the Harlem Globetrotters joined her for a montage. The special later went on to be nominated for a primetime Emmy. Four months later the film Foul Play (with Chevy Chase), was released and became a box office smash, reviving Hawn's film career. The plot centered around an innocent woman in San Francisco who becomes mixed up in an assassination plot.

Hawn's next film, Mario Monicelli's Lovers and Liars (1979), was a box office bomb. In 1972 Hawn recorded and released a solo country LP for Warner Brothers, titled Goldie. It was recorded with the help of Dolly Parton and Buck Owens. AllMusic gives the album a favorable review, calling it a "sweetly endearing country-tinged middle of the road pop record".[22]

Hawn's popularity continued into the 1980s, starting with another primetime variety special alongside actress and singer Liza Minnelli, Goldie and Liza Together (1980), which was nominated for four Emmy Awards. In the same year, Hawn took the lead role in Private Benjamin, a comedy she co-produced with her friend Nancy Meyers, who co-wrote the script. Meyers recalls Hawn's reaction when she first described the idea for the story:

It was like watching the greatest audience I've ever seen. She laughed and then she got real emotional and her eyes would fill up with tears. She loved the image of herself in an Army uniform and she loved what the movie had to say.[23]

Hawn at the Grand Hôtel in Stockholm 1981

At the age of thirty-nine, Hawn posed for the cover of Playboy's January 1985 issue, in which she was the subject of the Playboy Interview.[25] Her last film of the 1980s was opposite partner Kurt Russell, for the third time, in the comedy Overboard (1987).

In 1990 she starred in the action comedy Bird on a Wire, a critically panned but commercially successful picture that paired Hawn with Mel Gibson. Hawn had mixed success in the early 1990s, with the thriller Deceived (1991), the drama CrissCross and opposite Bruce Willis and Meryl Streep in Death Becomes Her (both 1992). Earlier that year, she starred in Housesitter, a screwball comedy with Steve Martin, which was a commercial success.

Hawn was absent from the screen for four years while caring for her mother who died of cancer in 1994.[9] Hawn made her entry back into film as producer of the satirical comedy Something to Talk About starring Julia Roberts and Dennis Quaid, as well as making her directorial debut in the television film Hope (1997) starring Christine Lahti and Jena Malone.[9]

Hawn returned to the screen again in 1996 as the aging, alcoholic actress Elise Elliot in the financially and critically successful The First Wives Club, opposite Bette Midler and Diane Keaton, with whom she covered the Lesley Gore hit "You Don't Own Me" for the film's soundtrack. Hawn also performed a cover version of the Beatles' song, "A Hard Day's Night", on George Martin's 1998 album, In My Life.

She continued her tenure in the 1990s with Woody Allen's musical Everyone Says I Love You (1996) and reuniting with Steve Martin for the comedy The Out-of-Towners (1999), a remake of the 1970 Neil Simon hit. The film was critically panned and was not successful at the box office.[26][27] In 1997, Hawn, along with her co-stars from The First Wives Club, Diane Keaton and Bette Midler, were recipients of the Women in Film Crystal Awards.[28]

In 2001 Hawn was reunited with former co-stars Warren Beatty (her co-star in $ and Shampoo) and Diane Keaton for the comedy Town & Country, a critical and financial fiasco. Budgeted at an estimated US$90 million, the film opened to little notice and grossed only $7 million in its North American theatrical release.[30] In 2002, she starred in The Banger Sisters, opposite Susan Sarandon and Geoffrey Rush, her last live action film for fifteen years. In 2005 Hawn's autobiography, A Lotus Grows in the Mud, was published.

In 2013, Hawn guest-starred, along with Gordon Ramsay, in an episode of Phineas and Ferb, in which she provided the voice of neighbor Peggy McGee.[31][32]

Hawn has studied meditation. In a 2012 interview, she stated, "I don't think of myself as a Buddhist. I was born Jewish, and I consider that my religion." She also stated, "It's not the idea of a particular religion that's important; it's the development of a spiritual life."[37]

Hawn at the Cinema Against AIDS gala in May 2011

Hawn is a supporter of the LGBT community. Speaking on nations such as Nigeria and others which have criminalized gay people, she denounced these laws, stating, "This is man's inhumanity to man, of the first order."[38]

Hawn's pre-fame boyfriends included actor Mark Goddard and crooner Spiro Venduras.[39] Her first husband was dancer (later director) Gus Trikonis, who appeared as a Shark in West Side Story. They married on May 16, 1969 in Honolulu, Hawaii and separated on April 9, 1973.[40][41] Hawn then dated stuntman Ted Grossman,[42] Swedish actor Bruno Wintzell[42] and Italian actor Franco Nero,[43] but did not file for divorce from Trikonis until New Year's Eve 1975, after becoming engaged to musician Bill Hudson of the Hudson Brothers, whom she met the previous summer on a first-class flight from New York to L.A.[44] Hawn was granted a divorce in June 1976 and married Hudson on July 3, 1976 in Takoma Park, Maryland.[45] They had two children, son Oliver (born September 7, 1976) and daughter Kate (born April 19, 1979). Hudson filed for divorce on August 15, 1980.[46] Hawn's next romances were with French actor Yves Rénier,[47] television star Tom Selleck[48] and Moroccan businessman Victor Drai.[49] The divorce from Hudson was finalized in March 1982.[50]

Hawn has been in a relationship with actor Kurt Russell since Valentine's Day 1983.[51] The couple first met while filming The One and Only, Genuine, Original Family Band in 1966, but became involved after re-connecting on the set of Swing Shift. They have a son, Wyatt (born July 10, 1986).[52] Hawn is also the de facto stepmother of Russell and Season Hubley's son Boston. In 2000 and again in 2004, news outlets reported that Hawn and Russell were on the verge of breaking up.[53][54][55][56] During the alleged separations, Hawn was linked to newsman Charles Glass and Pakistani cricketer and politician Imran Khan.[57][58] On the May 11, 2017 episode of Watch What Happens Live with Andy Cohen, Hawn quasi-confirmed longstanding rumors-which she previously had denied[59]-of an affair with Warren Beatty during the filming of their 1971 heist movie Dollars.[60] Hawn and Russell, who celebrated 35 years together in 2018, own homes in Vancouver, British Columbia, Canada;[1] Snowmass Village, Colorado;[2] Manhattan, New York;[3] Brentwood[4] and Palm Desert, California.[5]

In 2003 Hawn founded the Hawn Foundation, a non-profit organization which provides youth education programs intended to improve academic performance through "life-enhancing strategies for well-being".[61][62] The Hawn Foundation has supported research studies conducted by external researchers to evaluate the effectiveness of its educational program for children, called MindUP.[63]