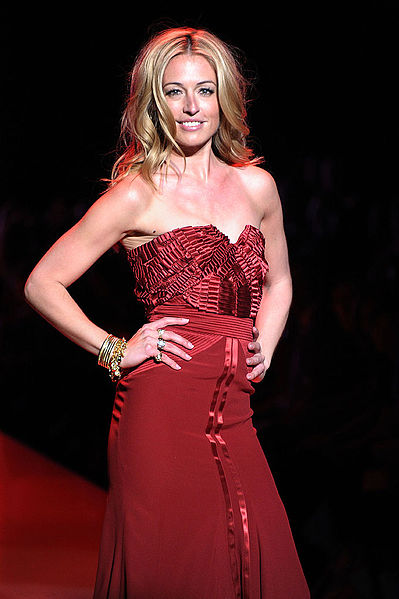 Catherine Elizabeth "Cat" Deeley (born 23 October 1976) is an English television presenter, actress, singer and model based in the UK and the United States. From 1998 to 2002, she hosted the children's programme SMTV Live and its spin-off chart show CD:UK. In 2001, she won a BAFTA Children's Award for hosting SMTV Live. She has also hosted Fame Academy on the BBC, and the 2004 Brit Awards.

Deeley became the presenter of Stars In Their Eyes from 2003 to 2006, taking over from Matthew Kelly. Since 2006, Deeley has been the host of So You Think You Can Dance in the United States, for which she has been nominated five times for a Primetime Emmy.[1]

Since 2003, Deeley has been a patron of London's Great Ormond Street Hospital for sick children. In December 2009, she was made a UNICEF UK ambassador. She is married to Northern Irish comedian and television personality Patrick Kielty.

Deeley was born at Sandwell General Hospital, West Bromwich, England and grew up in Sutton Coldfield and Great Barr.[2] She attended Grove Vale Junior School followed by Dartmouth High School in Great Barr, where she played the clarinet in the Sandwell Youth Concert Band.[3] She then joined the sixth form at Bishop Vesey's Grammar School in Sutton Coldfield.[4]

At age 14, Deeley entered a regional edition of a BBC competition for The Clothes Show, in which she reached the national finals.[4] She was signed as a model under her nickname of Cat to make it easier for clients to re-book her.[5]

Deeley became a full-time fashion model. She left full-time modelling in 1997, following changes in her contract with Storm. She moved on to co-present the MTV chart show, Hitlist UK, with close friend Edith Bowman. From 1998 until 2002, she was co-host with Ant & Dec of the Saturday morning children's programme SM:TV Live and hosted its spin-off programmes CD:UK (1998-2005) and CD:UK Hotshots. On SM:TV Live she often acted as an apparently slightly unwilling assistant whenever the show featured a guest appearance by a magician, participating in a number of different illusions including being sawed in half in a version of the illusion called Clearly Impossible.

In 2001, she won a Children's BAFTA award and appeared in an episode of the BBC's Happiness. In 2002, Deeley appeared in a television advert for Marks and Spencer. Other programmes she hosted include The Record of the Year, Fame Academy, The 2004 Brit Awards and Stars in Their Eyes, as well as a weekly broadcast on London's Capital FM and BBC Choice series Roadtripping, both with former MTV colleague Edith Bowman. In 2003, Deeley interviewed Kylie Minogue for a television special about her one-off concert, Money Can't Buy, which was broadcast in the United Kingdom on ITV on 22 November 2003 and in Australia on Network Ten on 24 November 2003. In 2005 she played herself in an episode of Little Britain, provided the voice of "Loretta Geargrinder" in the UK version of the film Robots replacing Natasha Lyonne, and presented a countdown of ITV's 50 Greatest Shows alongside Phillip Schofield as part of ITV 50.

In 2006, she began hosting the second season of American reality show So You Think You Can Dance, replacing newsreader Lauren Sánchez, who was pregnant. Deeley again interviewed Kylie Minogue for another television special which was broadcast in the United Kingdom on Sky One on 16 July 2006, in Australia on Channel Nine on 17 July 2006 and BBC America on 9 September 2006.[6][7][8] Deeley was a guest reporter on NBC's The Tonight Show. She presented Fox's New Year's Eve Special from Times Square in 2006 and 2007.[9]

On 1 July 2007, Deeley was one of many presenters at the Concert for Diana, a tribute concert to the late Princess Diana, with proceeds from the concert going to Diana's charities, as well as to charities of which her sons Prince William and Harry are patrons.[10] The event, watched by an estimated 500 million people, was at the new Wembley Stadium. In September 2007, Deeley presented Soundtrack to My Life, a music series produced by Hamma & Glamma Productions for ITV London that looks at the work and influences of an eclectic band of musicians. In January 2006, a new season of So You Think You Can Dance started its auditions, with Deeley in the role of host. She has been the host of the show ever since. In 2011, Deeley was nominated for a Primetime Emmy Award for Outstanding Host for a Reality or Reality-Competition Programme.[11]

Other projects of Deeley's include presenting the third season of Soundtrack to My Life and playing herself as host of comedian Peter Kay's Britain's Got the Pop Factor. In 2009, Deeley guest hosted the United States syndicated version of Who Wants to Be a Millionaire (for Meredith Vieira), and appearing on BBC America's broadcast of Gordon Ramsay's F Word. In the same year, Deeley hosted the television version of the electronic game 20Q for GSN. In January and February 2010, Deeley hosted So You Think You Can Dance in the UK. Also, in February 2010, Cat filled in for a holidaying Meredith Vieira as host on the morning TV show Today. On 31 March 2010, Deeley filled in for Kelly Ripa on the morning talk show Live with Regis and Kelly.

On 9 January 2011, Deeley made a small guest appearance in the Disney Channel sitcom Shake It Up, where she portrayed a vice principal who is, in secret, a dancer or a host.

In April 2011, Deeley presented an episode of CNN's Icon and chatted to The Simpsons voice actress Nancy Cartwright. In the same month, she also contributed to the network's coverage of that year's Royal Wedding which was hosted by tabloid journalist Piers Morgan.

In June 2011, Deeley launched her own "behind-the-scenes" web series called In The Dressing Room with Cat Deeley, produced by Deeley, Yahoo! and Collective Digital Studio.[12][13][14]

From 2014 until 2016, Deeley appeared as a panelist on the syndicated game show Celebrity Name Game hosted by Craig Ferguson.

In October 2017, Deeley began presenting the talent contest Sing: Ultimate A Cappella for Sky One in the United Kingdom.

Since 2003, Deeley has been a patron of London's Great Ormond Street Hospital. She is also an active supporter of UNICEF. In 2007, she took part in a UNICEF benefit show in Los Angeles during which magician David Copperfield sawed her in half using his antique Buzz Saw illusion. In 2008, she visited a number of UNICEF projects in the Philippines, including their Soccer Aid 2 project in Manila. In December 2009, she was made a UNICEF UK ambassador.[19]

Deeley describes her religious affiliation as Anglican, although she was not christened.[20]

Report a problem
Write to Cat Deeley at FanPal • 2021