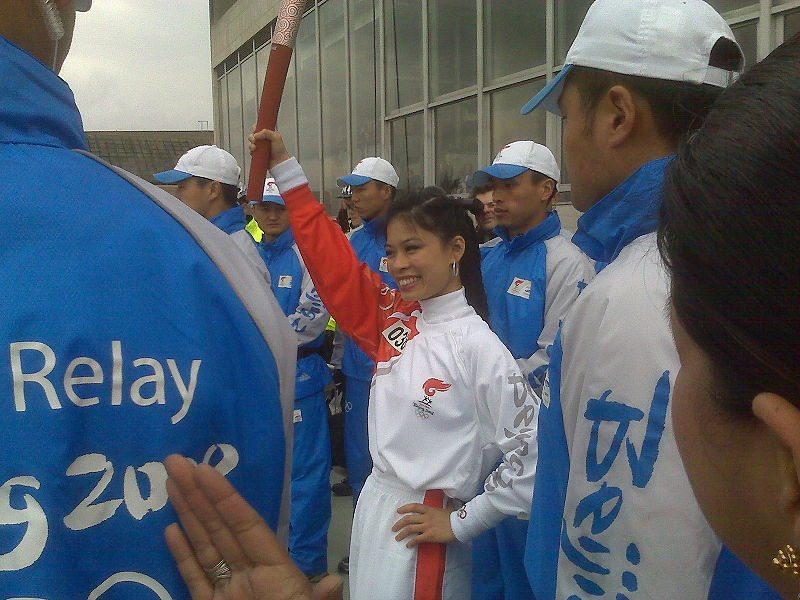 Vanessa-Mae (陈美 Chén Měi) (born 27 October 1978)[3] also called Vanessa-Mae Vanakorn Nicholson,[4] is a British violinist with album sales reaching several million, having made her the wealthiest entertainer under 30 in the United Kingdom in 2006.[5] She competed under the name Vanessa Vanakorn (her father's surname) for Thailand in alpine skiing at the 2014 Winter Olympics. She was initially banned from skiing because a qualifying race for her benefit was alleged to be corrupt, but the Court of Arbitration for Sport later nullified the ban, citing lack of evidence for her own wrongdoing or any manipulation.[6][7]

Vanessa-Mae was born on 27 October 1978 in Singapore, to a Singaporean mother Pamela Soei Luang Tan and Thai father Vorapong Vanakorn. After adoption by a British father, she moved to London at the age of 4 where she began playing the violin, having already started the piano in Singapore. At the age of eight Mae embarked upon an intensive period of study with Professor Lin Yao Ji at the National Conservatoire of Music in Beijing. Vanessa-Mae returned to London and entered London's Royal College of Music.

At age thirteen, Vanessa-Mae became the youngest soloist to record both the Beethoven and Tchaikovsky violin concertos, according to Guinness World Records.[8]

Her first pop-style album, The Violin Player, was released in 1995. She appeared on the 1997 Janet Jackson album The Velvet Rope playing a violin solo on the song "Velvet Rope".[9]

She was managed by her mother until Vanessa-Mae fired her in 1999.[10]

On 7 March 2002 Vanessa-Mae performed a variation of Antonio Vivaldi: The Four Seasons - "Summer: III. Presto" during the opening ceremonies of the 2002 Winter Paralympics.[11]

In April 2006, Vanessa-Mae was ranked as the wealthiest young entertainer under 30 in the UK in the Sunday Times Rich List 2006, having an estimated fortune of about £32 million.[5][12]

In October 2011, Vanessa-Mae attended celebrations in Chechnya on the birthday of Chechen leader Ramzan Kadyrov along with several other celebrities, "played a bit of Vivaldi's 'Four Seasons' utterly mechanically" according to The Moscow Times reporter Anna Malpas,[13] and reportedly received $US500,000 for her performance. When asked where the money comes from to pay for performances, Kadyrov replied that "Allah gives it to us".[14] Human rights groups, who had urged the celebrities to cancel their appearances because of human rights abuses carried out under Kadyrov, criticised her and other celebrities for attending the event.[15]

Mae has occasionally recorded her own compositions. Her 1997 album China Girl: The Classical Album 2 included two pieces in which she shared a writing credit: Violin Fantasy on Puccini's 'Turandot' and Reunification Overture, marking the reunification of China and Hong Kong.[16]

In 2017, ClassicFM compiled a list of the 300 best selling classical albums in the 25 years it has been running. Vanessa-Mae entered three times. The Classical Album 1 reached 244, Storm reached 135 and her debut mainstream album The Violin Player is the 76th best selling. The site claims that her total album sales make 'her the biggest-selling solo violinist in the chart'.[17]

Vanessa-Mae stated that she "started skiing around the same time as I began playing the piano, at around four, before moving to the violin at five",[18] and that it had been her "dream to be a ski bum since I was 14."[19] In 2009 Vanessa-Mae took up residence in the Swiss alpine resort of Zermatt.[1] In August 2010, she told The Telegraph, "I am British, but realistically there is no way I could represent my own country, but because my natural father is Thai, they have accepted me."[18] She registered as a Thai alpine skier.[20]

In 2014, Thailand had no Alpine skiers in the top 500, and Olympic rules allowed such countries to send one man and one woman to the Olympics slalom and giant slalom, based on alternative criteria: The skier must have 140 points or less, smaller scores being better under the International Ski Federation (FIS) system,[21][22] while starting at least five internationally recognised slalom or giant slalom events.[19][21][22]

At the request of Vanessa-Mae's management and the Thai Olympic Committee, a giant slalom competition was organised by the Alpine Ski Club Triglav and took place on 18 and 19 January 2014 at Krvavec in Slovenia, and would be the last chance for Mae to achieve the FIS-recognised score to qualify for the February 2014 Olympics.[23] The event included a national junior championship, in which she was 14 years older than any of the competition.[22]

She was one of two alpine skiers who represented Thailand at the 2014 Winter Olympics, where she competed under the name of "Vanessa Vanakorn"[21][26] (วาเนสซ่า เมย์ ตัน วรรณกร; Vanessa May Tan Vanakorn).[27]

On 10 July 2014 four Slovenian ski competition organisers were reported to have each been given four-year bans on working with Slovenian Ski Union (Smučarska zveza Slovenije) and FIS competitions because of supposedly fixed Sochi Winter Olympics qualifications for the Thai ski team at Krvavec in January 2014[32] - with the only goal to successfully qualify Vanessa Mae.[33] However, no formal bans were ever handed out.

On 11 November 2014, the International Ski Federation (FIS) Hearing Panel issued its own findings about the Krvavec event less than 10 months earlier: The weather was such that no regular race could be held; the competition's referee said that "any comparable competition in Slovenia would have been cancelled". A previously retired competitor took part in the alleged competition solely to lower (improve) the scores of the participants. The official results of "approximately 23 competitors" for the two races on 18 January included results at least two people who in fact did not attend. The official results for two giant slalom races on 19 January also included results for a person who was not even present at the Krvavec competition. One competitor who fell was given an official timing 10 seconds better than reality, and put in second place in the official results. At least one participant started outside the starting wand; afterward, the starter manually triggered the starting wand.[23]

The Hearing Panel issued a worldwide four year ban against Vanessa-Mae (that was lifted post-issuance, see Appeal decision),[2][23] two-year ban against the Chief of Race Borut Hrobat, and one-year bans against the FIS Technical Delegate, Chief of Timing, Referee, and Starter.[23] FIS president Gian-Franco Kasper commented to Associated Press concerning the violations: "Those who have been sanctioned have been sanctioned for good reason. At first we were laughing when we heard it. But then we realised it's quite a serious thing."[34]

As two or more participants worked in combination to violate the rules, the FIS Hearing Panel recommended that all four events during the Krvavec competition be annulled. The Hearing Panel noted that, if the results were to be annulled by the FIS Council, it will mean that Vanessa-Mae, Federica Selva of San Marino, and Ieva Januškevičiūtė of Lithuania will have not qualified for the 2014 Olympic Games.[23] Vanessa-Mae issued a statement calling the ban "nonsensical"[35] and saying "we will" appeal to the Court of Arbitration for Sport.[36]

The FIS Council met on 18 November and cancelled the results of "all four giant slalom races" at Krvavec and issued a press release saying that "Vanessa Vanakorn (THA) who competed in the Sochi 2014 Olympic Winter Games therefore did not qualify and should not have been participating in the Sochi 2014 Games." The FIS Council was of the opinion that Fredrica Selva and Ieva Januškevičiūtė "were victims of the manipulated races", and forwarded the information to the International Olympic Committee.[37] Vanessa-Mae filed appeals with the Court of Arbitration for Sport on 4 December 2014 against both the FIS Hearing Panel and the FIS Council.[38]

On 19 June 2015 the Court of Arbitration for Sport voided Vanakorn's four year ban, saying there was a lack of evidence that she herself manipulated the races; but the CAS dismissed her appeal to restore the qualifying results, confirming that the qualifying races "were so defective that their results and qualification points gained therefrom could not stand", and therefore "Vanessa Vanakorn remains ineligible to compete in the Sochi 2014 Olympic Winter Games".[6][7]

In 2016, Vanakorn settled her lawsuit against the International Skiing Federation (FIS), in which the FIS made an "appropriate payment", the amount of which was not disclosed.[39] The FIS issued an apology for its claims of race-fixing, and cited lax FIS rules for the questionable qualification races.[40]

Vanakorn returned to skiing in 2017, to attempt to qualify for the 2018 Winter Olympics.[41] Vanakorn withdrew from competition due to suffering a shoulder injury, in January 2018.[42] With her withdrawal, the placement for Thailand would go to 21-year-old Alexia Schenkel.[43]

As of 2014,[update] Vanessa-Mae's long-term boyfriend was French wine expert Lionel Catelan.[44] Vanessa-Mae has expressed a lack of interest in marriage, saying "you don't need a ring to say I love you".[45]

Report a problem
Biography of Vanessa Mae at FanPal • 2021