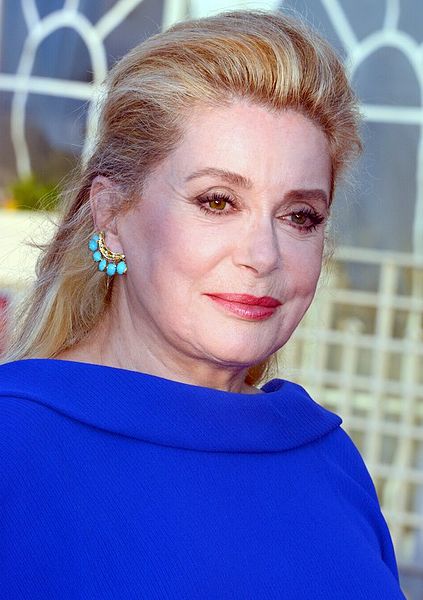 Catherine Deneuve (born 22 October 1943) is a French actress as well as an occasional singer, model and producer. She gained recognition for her portrayal of icy, aloof and mysterious beauties for various directors, including Luis Buñuel, François Truffaut and Roman Polanski.[1] In 1985, she succeeded Mireille Mathieu as the official face of Marianne, France's national symbol of liberty. A 14-time César Award nominee, she won for her performances in Truffaut's The Last Metro (1980), for which she also won the David di Donatello for Best Foreign Actress, and Régis Wargnier's Indochine (1992). She is also noted for her support for a variety of liberal causes and sometimes controversial statements.

Deneuve made her film debut in 1957 and first came to prominence in Jacques Demy's 1964 musical The Umbrellas of Cherbourg, before going on to star for Polanski in Repulsion (1965) and for Buñuel in Belle de Jour (1967) and Tristana (1970). She was nominated for the BAFTA Award for Best Actress for Belle de Jour, and the Academy Award for Best Actress for Indochine. She also won the 1998 Volpi Cup for Best Actress at the Venice Film Festival for Place Vendôme. Her English-language films include The April Fools (1969), Hustle (1975), The Hunger (1983) and Dancer in the Dark (2000). She's also one of the few actresses in cinema history to be awarded prizes at the three most important film festivals, the Cannes Film Festival, Venice Film Festival and the Berlin International Film Festival.

Deneuve was born Catherine Fabienne Dorléac in Paris, the daughter of French stage actors Maurice Dorléac and Renée Simonot. Deneuve has two sisters, Françoise Dorléac (1942-1967) and Sylvie Dorléac (born 14 December 1946),[2] as well as a maternal half-sister, Danielle, whom their mother had out of wedlock in 1937 with Aimé Clariond, but who was later adopted by Maurice and took his surname. Deneuve was her mother's maiden name, which she chose for her stage name, in order to differentiate herself from her sisters. Deneuve attended Catholic schools.[3]
Read more...

Deneuve made her film debut with a small role in André Hunebelle's Les Collégiennes (1957) with her younger sister Sylvie Dorléac who, like their older half-sister Danielle, was an occasional child actress.[4] She subsequently appeared in several films for director Roger Vadim as well as in L'Homme à femmes (1960), which caught the eye of Jacques Demy, who cast Deneuve in his 1964 musical Les Parapluies de Cherbourg, the film that brought her to stardom.[4] Deneuve played the cold but erotic persona, for which she would be nicknamed the "ice maiden", in Roman Polanski's horror classic Repulsion (1965), reinforcing it in Luis Buñuel's Belle de Jour (1967), and reaching a peak in Tristana (1970).[5] Her work for Buñuel would be her most famous.[6][7]

Further prominent films from this early time in her career included Jean-Paul Rappeneau's A Matter of Resistance (1966), Demy's musical Les Demoiselles de Rochefort (1967) and François Truffaut's romantic thriller Mississippi Mermaid (1969). Deneuve remained active in European films during the 1960s and 1970s, though she limited her appearances in American films of the period to The April Fools (1969), a romantic comedy with Jack Lemmon, and Hustle (1975), a crime drama with Burt Reynolds. Her starring roles at the time were featured in such films as A Slightly Pregnant Man (1973) with Marcello Mastroianni and Le Sauvage (1975) with Yves Montand.

In the 1980s, Deneuve's films included François Truffaut's Le Dernier métro (1980), for which she won the César Award for Best Actress, and Tony Scott's The Hunger (1983) as a bisexual vampire, co-starring with David Bowie and Susan Sarandon, a role which brought her a significant lesbian and cult following, mostly among the gothic subculture.[8] She made her debut film as a producer in 1988, Drôle d'endroit pour une rencontre, alongside frequent co-star Gerard Depardieu.

In the early 1990s, Deneuve's more significant roles included 1992's Indochine opposite Vincent Perez, for which she was nominated for an Academy Award for Best Actress and won a second César Award for Best Actress; and André Téchiné's two movies, Ma saison préférée (1993) and Les Voleurs (1996). In 1997, Deneuve was the protagonist in the music video for the song N'Oubliez Jamais sung by Joe Cocker. In 1998 she won acclaim and the Volpi Cup at the Venice Film Festival for her performance in Place Vendôme. In the late 1990s, Deneuve continued to appear in a large number of films such as 1999's five films Est-Ouest, Le temps retrouvé, Pola X, Belle maman, and Le Vent de la nuit.

In 2000, Deneuve's part in Lars von Trier's musical drama Dancer in the Dark alongside Icelandic singer Björk was subject to considerable critical scrutiny. The film was selected for the Palme d'Or at the Cannes Film Festival. She made another foray into Hollywood the following year, starring in The Musketeer (2001) for Peter Hyams. In 2002, she shared the Silver Bear Award for Best Ensemble Cast at the Berlin International Film Festival for her performance in 8 Women. In 2005, Deneuve published her diary A l'ombre de moi-meme ("In My Own Shadow", published in English as Close Up and Personal: The Private Diaries of Catherine Deneuve); in it she writes about her experiences shooting the films Indochine and Dancer in the Dark. She also provided the voice role of Marjane Satrapi's mother in Satrapi's animated autobiographical film Persepolis (2007), based on the graphic novel of the same name. In 2008, she appeared in her 100th film, Un conte de Noël.[9]

Deneuve's recent work includes Potiche (2010) with frequent co-star Depardieu, Les Bien-aimés (2012), alongside former co-stars Ludivine Sagnier and Chiara Mastroianni, the popular French adventure comedy Asterix and Obelix: God Save Britannia (2012) with Gerard Depardieu and Valérie Lemercier, screenwriter and director Emmanuelle Bercot's On My Way (2013), Palme D'or winning writer/director Pierre Salvadori's comedy drama In the Courtyard (2014), and André Téchiné's drama In the Name of My Daughter (2014). In 2017, she co-starred alongside Catherine Frot, in writer/director Martin Provost's French drama The Midwife, which has been acquired by Music Box Films for a summer 2017 distribution in the United States.[10][11]

Deneuve appeared nude in two Playboy pictorials in 1963 and 1965.[12] Her image was used to represent Marianne, the national symbol of France, from 1985 to 1989.[citation needed] As the face of Chanel No. 5 in the late 1970s, she caused sales of the perfume to soar in the United States – so much so that the American press, captivated by her charm, nominated her as the world's most elegant woman.[13] In 1983, American Home Products retained her to represent their cosmetics line and hired world-renowned photographer Richard Avedon to promote its line of Youth Garde cosmetics, for which she famously proclaimed, "Look closely. Next year I will be 40."

She is considered the muse of designer Yves Saint Laurent; he dressed her in the films, Belle de Jour, La Chamade, La sirène du Mississipi, Un flic, Liza and The Hunger. In 1992, she became a model for his skincare line. In 2001, she was chosen as the new face of L'Oréal Paris. In 2006, Deneuve became the third inspiration for the M•A•C Beauty Icon series and collaborated on the colour collection that became available at M•A•C locations worldwide in February that year. Deneuve began appearing in the new Louis Vuitton luggage advertisements in 2007. Deneuve was listed as one of the fifty best-dressed over 50s by the Guardian in March 2013.[14] In July 2017, Deneuve appeared in a video campaign for Louis Vuitton entitled Connected Journeys, celebrating the launch of the brand's Tambour Horizon smartwatch, which also featured celebrities, including Jennifer Connelly, Bae Doona, Jaden Smith and Miranda Kerr.[15]

In 1986, Deneuve introduced her own perfume, Deneuve.[16] She is also a designer of glasses, shoes, jewelery and greeting cards.[citation needed]

Deneuve is close friends with the artist Nall and owns some of his works.[26]

In 2000, a Golden Palm Star on the Palm Springs, California, Walk of Stars was dedicated to her.[29] In 2013, she was honoured for her lifetime achievement at the 26th European Film Awards.[30] In 2015, she received the Lifetime Achievement Golden Orange Award from International Antalya Film Festival, Turkey.

Report a problem
Write to Catherine Deneuve at FanPal • 2021