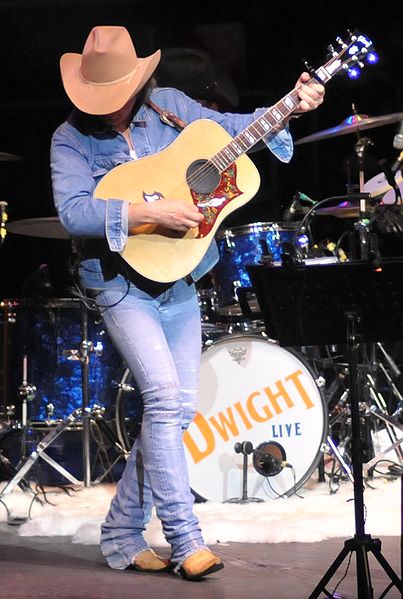 Dwight David Yoakam (born October 23, 1956) is an American singer-songwriter, musician and actor, known for his pioneering-style of country music. His popularity starting in the mid-1980s, Yoakam has recorded more than twenty albums and compilations, charted more than thirty singles on the Billboard Hot Country Songs charts, and sold more than 25 million records. He has recorded five Billboard #1 albums, twelve gold albums, and nine platinum albums, including the triple-platinum This Time. In addition to his many achievements in the performing arts, he is also the most frequent musical guest in the history of The Tonight Show.[1]

Dwight Yoakam was born on October 23, 1956, to Ruth Ann (née Tibbs), a key-punch operator, and David Yoakam, a gas-station owner.[2][3] He was born in Pikeville, Kentucky, but was raised in Columbus, Ohio, where he graduated from Northland High School in 1974. During his high school years, he took part in both the music and drama programs, having been cast in lead roles for the school's plays, including "Charlie" in Flowers for Algernon. Outside of school, Yoakam sang and played guitar with local garage bands.

He briefly attended Ohio State University but dropped out and moved to Los Angeles in 1977 with the intent of becoming a recording artist.[4] On May 7, 2005, Ohio Valley University in Parkersburg, West Virginia, awarded and presented Yoakam with an honorary doctorate.[5]

When he began his career, Nashville was oriented toward pop "urban cowboy" music, and Yoakam's brand of hip honky tonk music was not considered marketable.

Not making much headway in Nashville, Yoakam moved to Los Angeles and worked towards bringing his particular brand of new Honky Tonk or "Hillbilly" music (as he called it) forward into the 1980s. Writing all his own songs, and continuing to perform mostly outside traditional country music channels, he did many shows in rock and punk rock clubs around Los Angeles, playing with roots rock or punk rock acts like The Blasters (Yoakam scored a small video hit with his version of their song "Long White Cadillac"), Los Lobos, and X. This helped him diversify his audience beyond the typical country music fans, and his authentic, honky-tonk revivalism brought rock audiences closer to country music.[6]

Yoakam's recording debut was the self-financed EP Guitars, Cadillacs, Etc., Etc. on independent label Oak Records produced by lead-guitarist Pete Anderson; this was later re-released by Reprise Records, with several additional tracks, as his major-label debut LP, 1986's Guitars, Cadillacs, Etc., Etc..[7] The record hit the market during a sea change in country music: the urban cowboy music was out of style, and neotraditional music based on classic styles, such as Yoakam's honky-tonk inspired music, was now in demand. The LP was a breakout hit and spawned his first two hit singles: "Honky Tonk Man", a remake of the Johnny Horton song, and the title track "Guitars, Cadillacs." His stylish video "Honky Tonk Man" was the first country music video ever played on MTV. The follow-up LP, Hillbilly Deluxe, was just as successful. His third LP, Buenas Noches from a Lonely Room, included his first No. 1, a duet with his musical idol, Buck Owens, on "Streets of Bakersfield". 1990's If There Was a Way was another best-seller.

Yoakam's song "Readin', Rightin', Route 23" pays tribute to his childhood move from Kentucky, and is named after a local expression describing the route that rural Kentuckians took to find a job outside of the coal mines. (U.S. Route 23 runs north from Kentucky through Columbus and Toledo, Ohio and through the automotive centers of Michigan.) Rather than the standard line that their elementary schools taught "the three Rs" of "Readin', 'Ritin', and 'Rithmetic", Kentuckians used to say that the three Rs they learned were "Readin', 'Ritin', and Route 23 North".

Johnny Cash once cited Yoakam as his favorite country singer. Chris Isaak called him as good a songwriter as ever put a pen to paper. Time dubbed him "A Renaissance Man" and Vanity Fair declared that "Yoakam strides the divide between rock's lust and country's lament." Along with his bluegrass and honky-tonk roots, he has written or covered many Elvis Presley-style rockabilly songs, including his covers of Queen's "Crazy Little Thing Called Love" in 1999 and Presley's "Suspicious Minds" in 1992. He recorded a cover of The Clash's "Train in Vain" in 1997, a cover of the Grateful Dead song "Truckin'", as well as Cheap Trick's "I Want You to Want Me". He has never been associated only with country music; on many early tours, he played with hardcore punk bands like Hüsker Dü, and played many shows around Los Angeles with roots/punk/rock & roll acts. His middle-period-to-later records saw him branching out to different styles, covering rock & roll, punk, 1960's, blues-based "boogie" like ZZ Top, and writing more adventurous songs like "A Thousand Miles From Nowhere". In 2003, he provided background vocals on Warren Zevon's last album The Wind.

In the 21st century, Yoakam released dwightyoakamacoustic.net, an album featuring solo acoustic versions of many of his hits; left his major label and started his own label.[citation needed]

2005 saw the release of Yoakam's well-reviewed album Blame the Vain, on New West Records. He also released an album dedicated to Buck Owens, Dwight Sings Buck, on October 23, 2007. His duet with Michelle Branch, a song titled "Long Goodbye", was released as a free download on her official website in early 2011.

In July 2011, Yoakam re-signed with Warner Bros. Nashville and announced plans to release a new album. 3 Pears was released on September 18, 2012 with twelve new tracks. Produced by him, it includes a collaboration with Beck. 3 Pears was released to resounding critical acclaim and earned him the highest-charting debut of his career on the Billboard 200 and Billboard Country Albums charts. 3 Pears reached #1 on the Americana Radio chart on October 29, 2012 and went on to break the 2012 record for most weeks at #1 on Americana Radio.[8] By the end of 2012, it was named on annual best of lists by NPR, Rolling Stone, American Songwriter, AOL's The Boot, Entertainment Weekly, The Village Voice, and Rhapsody, and has been included in more critics' "best of 2012" lists than any other artist in the country genre.[1]

In February 2015, Yoakam announced a new studio album, titled Second Hand Heart and released on April 14.[10] In 2016, he supported the album by performing at the C2C: Country to Country festival in Europe. He performed at the Americana Music Honors & Awards, announcing that he was working on a new album of all bluegrass songs. The album, titled Swimmin' Pools, Movie Stars..., was released in September 2016.

At the 59th Grammy Awards he introduced fellow artist and friend Sturgill Simpson. In 2018, Yoakam embarked on the LSD Tour with Lucinda Williams and Steve Earle[11].

Yoakam has also starred in many films, most notably as the ill-tempered, abusive live-in boyfriend in Sling Blade (1996), as a psychopathic killer in Panic Room (2002), as a police detective in The Minus Man (1999) and as the sheriff in The Three Burials of Melquiades Estrada (2005). He appeared in a supporting role as Doc Miles, the doctor for Chev Chelios, in Crank (2006) and its sequel, Crank: High Voltage (2009). In addition, he guest starred in the King of the Hill episode "Nine Pretty Darn Angry Men" as Lane Pratley. He also had a cameo appearance in the 2005 comedy movie Wedding Crashers. In 2006, he starred alongside Penélope Cruz and Salma Hayek in Bandidas; in 2008, he played Pastor Phil in Four Christmases, starring Vince Vaughn and Reese Witherspoon; and he appears in Dirty Girl (2010). He also appeared in The Last Rites of Ransom Pride, an independent 2010 Western that also stars fellow country singer Kris Kristofferson. He played a truck driver in the Wyoming crime thriller, Red Rock West (1993). He also played Brentwood Glasscock in The Newton Boys (1998).

In 2000, Yoakam co-wrote, starred in, produced and wrote the soundtrack for South of Heaven, West of Hell, also starring Vince Vaughn and Bridget Fonda.

Yoakam was featured in a recurring role as Bruce on the FX series Wilfred but was replaced by William Baldwin in the show's fourth and final season. He also appears in the second season of Under the Dome as Lyle Chumley, who runs the Chester's Mill's barbershop. In 2016 Yoakam appeared in a supporting role on the Amazon original show Goliath which stars Billy Bob Thornton.[7]

Yoakam's food brand, Bakersfield Biscuits,[12] has been available at retailers such as Walmart.[13]

On April 26, 2018, SiriusXM launched a new channel: Dwight Yoakam and the Bakersfield Beat that features the music from Southern California that focuses on, and influences, the Bakersfield sound.[14]

Although Dwight Yoakam has been in relationship with some high profile women like Sharon Stone, he has never married.