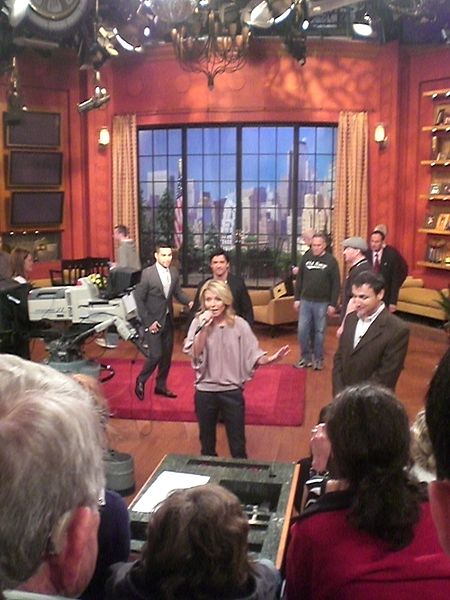 Ripa portrayed Hayley Vaughan on the ABC daytime soap opera, All My Children, between 1990 and 2002. She is the co-host of the syndicated morning talk show, Live! with Kelly and Ryan, in various formats since 2001. She also played Faith Fairfield on the ABC sitcom, Hope & Faith, from 2003 to 2006. Ripa and her husband, Mark Consuelos, own a New York-based production company, Milojo.[1]

In 2014, The Hollywood Reporter named her one of the Most Powerful People in Media.[2]

Kelly Maria Ripa was born in Stratford, New Jersey, the daughter of Esther, a homemaker, and Joseph Ripa, a labor union president and bus driver. She has a sister, Linda, who is a children's book author.[3] She has three-quarters Italian and one-quarter Irish ancestry. Ripa was raised Roman Catholic.[4][5] Her father has been the Democratic County Clerk for Camden County, New Jersey, since June 2009. She is the first in her family to enter the acting profession. She has studied ballet since age three, plays the piano, and in her words is "no Barbra Streisand" but can carry a tune.[citation needed]

Ripa graduated from Eastern Regional High School in Voorhees Township, New Jersey,[6] where she became a cheerleader and was later encouraged by her drama teacher to pursue acting. "I owe so much of my career to Jim Beckley,"[7] she said. "He thought I was a natural performer and so he gave me the lead in the next show."[8] She starred in local theatre productions and was discovered while performing in The Ugly Duckling during her senior year.[6] She attended Camden County College studying psychology, but dropped out and moved to New York City to become an actress.[9]

Dancin' on Air, Dance Party USA and All My Children

Aside from local TV gigs, Ripa's first national television exposure came in 1986 when she appeared as a regular dancer on Dancin' On Air, leading into Dance Party USA. Her career goal at the time was to be a newscaster and she often did the cast news reports.

Ripa was cast in her first major acting role in 1990 as Hayley Vaughan, a troubled party girl, on All My Children. She concluded her 12-year stint in 2002, but returned for two episodes in 2010 to help celebrate the soap opera's 40th anniversary.

After co-host Kathie Lee Gifford's final show on Live! with Regis and Kathie Lee, Regis Philbin began holding on-air auditions to find her replacement. In his autobiography, How I Got This Way, Philbin says of discovering Ripa:

There was one guest we'd had on with us a few years before who had . Hers was a natural, quick-witted, unaffected, confident, fun-loving kind of sparkle that both Gelman and I remembered very well. We decided to invite her back, this time to consider her as a possible co-host. So that was when this smiling, petite ball of fire named Kelly Ripa made her return to Live! for a test run at the rotating, up-for-grabs hot seat to my left. And my God, who knew what spontaneous combustion we'd make together?[10]

On the day of Ripa's initial Live! with Regis tryout (November 1, 2000), psychic Char Margolis was among the guests. During this segment, Margolis guessed that Ripa was pregnant with her second child. Ripa replied, "I haven't told my boss yet!" Philbin later said that Ripa was first among the potential candidates including Jane Krakowski, Valerie Bertinelli, Dolly Parton, and Bernadette Peters: "t could only be Kelly. We knew that from her memorable debut onward." Ripa was announced as official replacement on February 5, 2001. Within months the renamed Live! with Regis and Kelly's young-audience demographics increased by 80 percent with Ripa credited for bringing "a new life to the show."[11]

The chemistry between Philbin and Ripa (or "Pippa" as he nicknamed her), their banter, interviews, and conversations about their families, personal lives, and New York City attracted a successful, strong, and loyal viewership averaging 6 million viewers daily.[12] In January 2011, Philbin, 80, announced that he would be retiring from Live! at the end of the year. His final show aired Friday, November 18, 2011, during which Ripa tearfully reminisced about her first day, the 43 steps they walked together from her dressing room onto set each day for 11 years, and how those 43 steps changed her life. "Thank you for everything! It's been just great my Pippa," Philbin told her in an embrace. Ripa responded, "Thank you for everything. I love you." "I love you, too," said Philbin.[13]

On May 16, 2016, the show's name was changed to Live! with Kelly after Strahan's last show before his move to Good Morning America.

On May 1, 2017, the show's name was changed to Live with Kelly and Ryan, after Ryan Seacrest took over as Strahan's permanent replacement.

Best known for her television work, Ripa also has several feature films to her credit. She appeared in the acclaimed Miramax feature Marvin's Room in 1996 alongside Meryl Streep and Leonardo DiCaprio.

Ripa serves as a spokesperson for several companies. In the past, she has partnered with Tide, 7 Up, Pantene, and TD Bank, but currently works primarily with Electrolux and Rykä.

Rykä announced Ripa as the spokesperson for the brand's footwear and sporting apparel in 2008. Ripa oversees the design of her own fitness-inspired active wear line, The Kelly Ripa Collection.[17]

Ripa stars in the Electrolux television and print advertising, and her image is used on point of sale materials and extensively online.[18]

Ripa is a supporter of the ovarian cancer cause, and has teamed with Electrolux to raise funds for The Ovarian Cancer Research Fund. Every summer, she hosts an event called Super Saturday, a day-long fundraising event. 2011's event raised over $3.5 million for OCRF. Ripa attributes her dedication to the experience of losing a friend to ovarian cancer.[19] In 2001, she appeared on a celebrity version of Who Wants to Be a Millionaire?, hosted by Philbin. She won $250,000 for Tomorrow's Children's Fund, a non-profit organization dedicated to speeding the healing of children with cancer and serious blood disorders.

Ripa is also an active participant in Mothers Against Drunk Driving. According to Ripa, her involvement with MADD is motivated by her sister, Linda, who was almost killed by a drunk driver in 1999.[20]

In 2007, Ripa and her husband Mark Consuelos founded Milojo, the production company, named for their children Michael, Lola, and Joaquin. It began with the Emmy-nominated feature documentary The Streak, which told the story of the Brandon High School wrestling team and its 34-year winning streak. It premiered at the Tribeca Film Festival in 2008. In addition, Milojo launched a first look development deal with Discovery Channel for non-scripted series' including Homemade Millionaire, hosted by Ripa, and the docu-series Masters of Reception. Their next film, Off the Rez, was also accepted to the Tribeca Film Festival and premiered on TLC in May 2011.[21] In 2012, the company premiered its first short film, a collaboration with Will Ferrell's Funny or Die entitled "The Bensonhurst Spelling Bee" featuring Ripa, Consuelos, and their son, Michael. The video has had over 1,000,000 views.[22]

In 1999, she won the Best Actress Award at the New York International Independent Film and Video Festival for her work in The Stand-In.

In 2007 and 2012, Ripa hosted the TV Land Awards to very positive reviews.[23] She, herself, is an award winner, garnering five Soap Opera Digest Awards and three Daytime Emmy Award nominations for playing Hayley Vaughan on All My Children.

The Broadcast Pioneers inducted Ripa into their Hall of Fame for her tremendous success in the television industry on November 19, 2010 and also honoured her as their Person of the Year.[24]

In 2008, Cowboy Mouth, a New Orleans, Louisiana-based rock band, honored Ripa by writing a song in tribute, entitled Kelly Ripa, that appeared on their album Fearless. The band performed the song on Live! on March 13, 2008.

In 2017, Ripa was inducted into the New Jersey Hall of Fame.