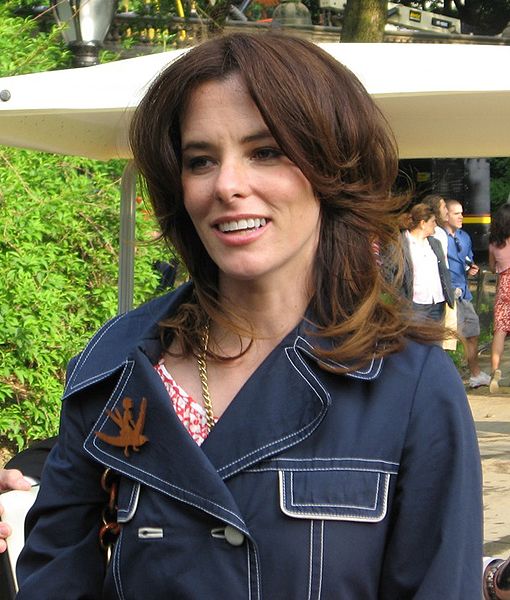 Parker Christian Posey (born November 8, 1968) is an American actress and musician. She frequently works with Christopher Guest and has appeared in several of his mockumentaries, such as Waiting for Guffman (1996), Best in Show (2000), A Mighty Wind (2003), For Your Consideration (2006), and Mascots (2016). Posey is the recipient of a Golden Globe Award nomination, a Satellite Award nomination and two Independent Spirit Award nominations.

Posey was born in Baltimore, Maryland, to Lynda (née Patton),[2][3] a chef, and Chris Posey, owner of a car dealership. She has a twin brother, Christopher. Posey's first name was given to her because her mother had a childhood friend she admired named Parker. After Posey's birth, her family lived in Monroe, Louisiana for 11 years.[4] They later moved to Laurel, Mississippi, where her mother worked as a chef and culinary instructor for the Viking Range Corporation in Greenwood, and her father operated a car dealership. Posey was raised as a Catholic.[5]
Read more...

Posey attended the State University of New York at Purchase, where she studied drama and roomed with actresses Sherry Stringfield[6] and Orlagh Cassidy.

Posey got her first break in television with the role of Tess Shelby on the daytime soap opera As the World Turns. Posey's first major role in a feature film was in Dazed and Confused (1993) with Ben Affleck, Matthew McConaughey, and Jason London.[7] The film received favorable reviews from critics and has been identified as a cult classic. In 2003, Entertainment Weekly ranked the film #17 on their list of "The Top 50 Cult Films",[8] third on their list of the 50 Best High School Movies,[9] 10th on their "Funniest Movies of the Past 25 Years" list,[10] and ranked it #6 on their "The Cult 25: The Essential Left-Field Movie Hits Since '83" list.[11]

In 1994, she appeared in Hal Hartley's short film Opera No. 1, with Adrienne Shelley. Throughout the late 1990s, Posey co-starred in 32 independent films and was nicknamed "Queen of the Indies".[1] These films include Personal Velocity, Basquiat, Clockwatchers, The Daytrippers, Party Girl and The House of Yes. In particular, she received positive reviews for the latter film, with her role as a delusional woman in love with her own brother.[12][13] In an interview in January 2012, Parker said that the unofficial title has sometimes been a hindrance:

I'm trying to work in studio movies, but they won't hire me. I get feedback from my agent saying, 'She's too much of an indie queen.' And then on the other side, my name doesn't get the financing to do a movie over $1 million. And I'm called 'the indie queen.' So it's really a challenging path because I know so much about the indie side of the business. Because I grew up in it... But it's different times. And this stuff gets projected onto me. People are like, 'You're here every year, you do so many indie movies.' And I'm like, 'No, I did Broken English five years ago.'[14]

She has co-starred in Christopher Guest's films, including five of his mock documentaries, the first being Waiting for Guffman in 1996. In 1998, Posey appeared in Hartley's film Henry Fool, and the big budget studio film You've Got Mail.

In 2000, she starred in Guest's third mock documentary Best in Show, and in the big budget horror film Scream 3. Critical reaction to Posey's performance in the latter film was highly positive, and earned her an MTV Movie Award nomination. However, she lost to Adam Sandler, who won it for his performance in Big Daddy. The next year she played the antagonist in Josie and the Pussycats. From 2001-2002, she appeared in a supporting role in the popular NBC sitcom Will & Grace.

In 2003, she starred in Guest's A Mighty Wind. The next year she appeared in Sisters of Mercy, Laws of Attraction, and Blade: Trinity. Posey then co-starred in the 2005 film Adam & Steve.[15]

In 2006, Posey appeared in Superman Returns as Kitty Kowalski, Lex Luthor's ditzy sidekick,[7] a character based on Eve Teschmacher from the 1978 film Superman. Posey was the only actress considered for the role.[16][17] Superman Returns was a box office success.[18] The film was also successful at the 33rd Saturn Awards, Posey, a few fellow cast members, and the visual effects department were all nominated.[19] Later the same year she played the title character in Fay Grim, the sequel to Henry Fool, and appeared in For Your Consideration.

In 2007, Posey was cast in the lead role on the TV series The Return of Jezebel James.[20] The show was originally given 13 episodes, but, the show was cut to seven episodes in anticipation of the pending writers strike.[21][22] It premiered on the Fox television network in 2008 as a mid-season replacement. However, the show was officially canceled after the third episode aired due to unacceptably low ratings.[23] She starred in Zoe Cassavetes' 2007 film Broken English.[24] Broken English screened at the 2007 Sundance Film Festival.[25] It was also entered into the 29th Moscow International Film Festival.[26] The film was nominated at the 23rd Independent Spirit Awards for Best First Screenplay and Posey was nominated for Best Female Lead.[27] She was set to co-star in John Waters' film Fruitcake with Johnny Knoxville. The film was to be set in her hometown of Baltimore, Maryland.[28] However, Waters announced that he has canceled Fruitcake, saying "I can't get it made...I thought it would do well, but it's not. In this economy, I'm going to have to do a puppet show."[29]

In 2012, Posey starred in four episodes of the third season of Louie as Liz, Louis C.K.'s love interest. She received positive reviews for her stint on the show. The website Vulture stated "Posey is superb in a brilliantly written role."[30] Lindsay Bahr of Entertainment Weekly said "Posey used her arsenal of talent and the material written and directed by C.K. to bring Liz to life".[31] Andy Greenwald of GrantLand felt Posey was "funny, engaging, and breathless", and went on to call Posey "one of the most gifted actors alive".[32] Later the same year she was honored with the Excellence in Acting Award at the Provincetown International Film Festival.

Posey appeared in Ned Rifle, the third and final film in Hartley's Henry Fool trilogy, again reprising her role of Fay Grim.[33] On November 6, 2013, Hartley launched a fundraising campaign through Kickstarter to produce the film, netting a total of $384,000. Posey, Liam Aiken, James Urbaniak, and Thomas Jay Ryan, as well as some crew members, appeared in several videos promoting the campaign.[34] The film premiered on September 7, 2014 at the 2014 Toronto International Film Festival.[35] It was also screened in the Panorama section of the 65th Berlin International Film Festival on February 6, 2015.[36]

In July 2014, it was announced that Posey had signed on to co-star in Woody Allen's mystery drama Irrational Man with Joaquin Phoenix, Emma Stone, and Jamie Blackley.[37] The film had its world premiere on May 16, 2015, at the 2015 Cannes Film Festival.[38][39] In July 2015, Parker revealed that before being cast in the film, she had considered quitting acting, as she feared that she "saw the independent film movement go away from me... it's a world market now. They're made from real star power. Whoever's hot at the moment." When Allen cast her, she cried, as "the independent film way of working is something that was in my bones. It's like being a part of a punk band but no one’s singing punk rock anymore. Only a few bands are able to play, and Woody Allen is one of them. That's why I cried. It was a relief."[40]

Posey made her stage debut in 2001. She learned to play the mandolin to prepare for her role in A Mighty Wind (2003),[7] a film in which she also sang. She provided vocals on several of her ex-boyfriend Ryan Adams' records. She also played the mandolin on The Dandy Warhols track "I Am Sound" from their Welcome to the Monkey House LP.[42]