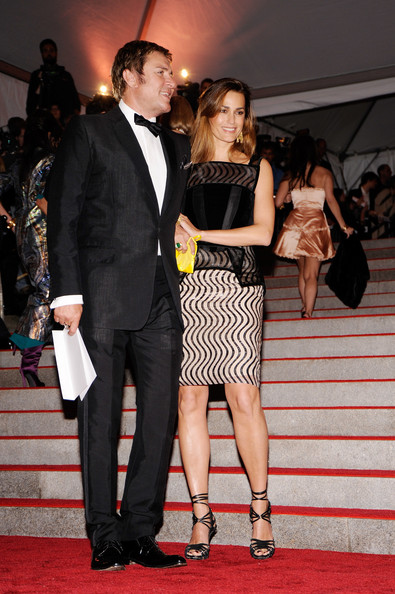 Yasmin Parvaneh was born in Oxford, England, the younger child of an Iranian father and an English mother.[3] She has an older sister named Nadreh. Her mother, Patricia, died of breast cancer in 2004.

She modelled for a local agency while she attended school, and after leaving signed with Models 1 Agency in London.[4]

In April 1987, she was hired by Guess? for an advertising campaign.[5] She appeared on the cover of the first American and British issues of Elle. She has also been on the covers of Vogue, V, I.D., Cosmopolitan, Marie Claire and Harper's Bazaar. As a model, Le Bon has also represented Ann Taylor, Banana Republic, Bergdorf Goodman, Biotherm, Bloomingdale's, Bonwit Teller, Calvin Klein, Versace, Chanel, Christian Dior, Clairol, Escada, Filene's, Frasercard, Avon and Gianfranco Ferré.[6]

Le Bon was invited to be one of the drivers in the 2013 Mille Miglia race in Italy. Each year, the three-day event passes through nearly 200 Italian towns from Brescia to Rome and back, recreating the original races which took place between 1927 and 1957. She and her co-driver, David Gandy, were part of “Team Jaguar”, driving a 1950 Jaguar XK120. Early in the race, Le Bon and Gandy were “pushed off the road by a competitor” which caused body damage to the wing and side of the vintage car. They re-entered the race, ultimately finishing in 158th place out of 415 cars.[8]

In 1984, she met Simon Le Bon, lead singer of Duran Duran. They married on 27 December 1985 in her hometown of Oxford. The couple have three daughters: Amber Rose Tamara (born August 1989), Saffron Sahara (born September 1991) and Talullah Pine (born October 1994), all born in London. She became a grandmother on June 6, 2018 when her daughter Saffron gave birth to a baby boy in London named Taro Arturo Le Bon, with boyfriend Benjamin (or "Benji").

Yasmin Le Bon is represented by Elite Model Management and The Model CoOp.