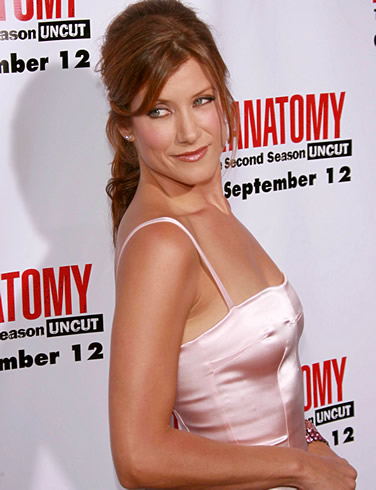 Kathleen Erin Walsh (born October 13, 1967)[1] is an American actress and businesswoman. Her roles include Dr. Addison Montgomery on the ABC television dramas Grey's Anatomy and Private Practice, Rebecca Wright on the short-lived NBC sitcom Bad Judge, and Olivia Baker on the Netflix drama series 13 Reasons Why.

Walsh was born in San Jose, California,[1] the daughter of Angela Walsh.[2] She grew up in a Roman Catholic household[3] in Tucson, Arizona. Her father is Irish, being a native of Navan, County Meath, and her mother is of Italian descent.[4][5][6]

Walsh attended Catalina Magnet High School for three years before transferring to and graduating from Rincon High School.[7] She later studied acting at the University of Arizona and at Chicago's Piven Theatre Workshop before moving to New York City and joining the comedy troupe, Burn Manhattan, supporting herself by waitressing.[8]

Walsh at the HBO Post-Emmys Party in September 2008

Before modeling, Walsh worked at Burger King and Dairy Queen. She began as a model in Japan in the 1980s where she also taught English. Later she moved to Chicago and worked with the Piven Theatre Workshop. She also performed on National Public Radio in the production of the radio play Born Guilty.

After playing Cathy Buxton in the Homicide: Life on the Street episode "Stakeout" in 1996 and Navy Lieutenant Kirstin Blair in the Law & Order episode "Navy Blues", her first major television appearance was in 1997, when she appeared on The Drew Carey Show as Drew Carey's love interest, Nicki Fifer. She wore a fatsuit in some episodes of the show, as the Nicki character was a formerly obese woman who lost weight and slowly started to gain it back.

She went on to portray Carol Nelson in HBO's The Mind of the Married Man television series, and played Norm Macdonald's romantic interest in the sitcom The Norm Show. Walsh also made a guest appearance on CSI: Crime Scene Investigation as Mimosa, a transsexual. She sometimes appeared in sketches on Late Night with Conan O'Brien. She had a recurring role on Karen Sisco as Detective Marley Novak in 2003 and 2004.

In 2005, she was cast in her breakout role in the ABC series Grey's Anatomy, as Dr. Addison Montgomery, the estranged spouse of Derek Shepherd ("Dr. McDreamy", played by Patrick Dempsey).

It was announced in February 2007 that Walsh's Grey's Anatomy character would be in a spin-off of Grey's Anatomy that began airing in September 2007. Taye Diggs, Tim Daly, Amy Brenneman, Chris Lowell, and Audra McDonald were cast in the spin-off, Private Practice.[9][10] Walsh returned to Seattle Grace as a special guest star for episode thirteen in Season 4 and episodes 15 and 16 in Season 5 of Grey's Anatomy. She also briefly returned for one episode in season 6 and two episodes in the seventh and eighth seasons.

She continued playing the character of Addison Montgomery on the fourth season of Private Practice, for which ABC ordered a full season of episodes.[11] On January 10, 2011, ABC picked up Private Practice for the 2011-2012 fall season (5th season). Walsh guest-starred in "Song Beneath The Song", a musical episode of Grey's Anatomy.

Walsh at the HBO Post-Emmys Party in September 2008

Beginning in September 2007, Walsh has appeared in television commercials for the 2008 Cadillac CTS.[12] She is also the current spokeswoman for Caress' Exotic Oil Infusions body wash.[13] On June 12, 2012, Walsh announced that the sixth season of Private Practice would be her final season.[14] However, she mentioned she'd be open to reprise her role in Grey's Anatomy for a few guest spots.

In 2014, Walsh had a supporting role in the first season of FX's television series Fargo. She had a guest starring role in Hulu's original series The Hotwives of Orlando and later starred in the NBC series Bad Judge, which aired for one season. As of 2017, Walsh stars in the Netflix drama series 13 Reasons Why, as the mother of a child who commits suicide. Her performance was met with critical acclaim, having been dubbed the "best work" of her career.[16]

In 1995, she starred in her first movie. The Normal Life was her debut in the big screen. The crime drama Normal Life marked her film debut; she played the sister of a bank robber played by Luke Perry. In Peppermills, she portrayed a kleptomaniac. Walsh appeared in the cult movie, Henry: Portrait of a Serial Killer, Part II. She gained attention in a major Hollywood production as Will Ferrell's character's wife in the family comedy, Kicking & Screaming, alongside Robert Duvall and Mike Ditka. Walsh has appeared in several other films with Ferrell, including Bewitched (with Nicole Kidman) and an "alternate film" to Anchorman titled, Wake Up, Ron Burgundy: The Lost Movie.

In 2003, Walsh appeared in Under the Tuscan Sun, with Diane Lane and Sandra Oh. She played the partner of Sandra Oh's character. Regarding her lesbian roles, Walsh said: "Do I give off a girl-on-girl vibe, I wonder? Or is it because I’m tall? I guess the chicks just dig me!"[17]

Walsh was set to star opposite John Cusack and Samuel L. Jackson in the supernatural thriller 1408, but she had to drop out due to scheduling conflicts.[18] Walsh starred alongside Dennis Quaid and Paul Bettany in the biblical horror film Legion, that was released on January 22, 2010.[19] She played Charlie's mother in The Perks of Being a Wallflower.

In May 2010, Walsh made her off-Broadway debut opposite Paul Sparks in Atlantic Theater Company's world premiere of Stephen Belber's Dusk Rings a Bell. The new play began previews on May 19 and opened May 27 at Atlantic Stage 2 and played through June 26. The New York Times called it "a sublime, beautifully acted drama."[20] She also had a long theater career in Chicago, which included roles in Happy Birthday Wanda June, The Danube, Moon Under Miami and Troilus and Cressida. In New York, Walsh was a member of the improvisational comedy troupe Burn Manhattan and the New York City Players theater ensemble.[21]

Walsh founded Boyfriend LLC, a beauty and lifestyle company in 2010.[citation needed] The company launched its first product in November 2010: a perfume called "Boyfriend".[22] HSN, a leading multichannel retailer, and Walsh partnered to launch the "Boyfriend" fragrance with live appearances by the actress/entrepreneur on HSN, November 11 and 12.[23] Walsh's fragrance train case, including Boyfriend eau de perfume, pulse point oil and votive candles, sold out on day one exceeding sales expectations.[24]

Leading up to the launch of Boyfriend, Walsh released eight webimercials written and directed by the actress herself, relaying the sentiments the Boyfriend scent was developed to evoke.[25][26] Launched via various social media channels, including Twitter, YouTube and select blogs, the Boyfriend webimercials have been viewed more than 200,000 times to date and were released by Walsh prior to her appearance on HSN to drive excitement and anticipation.[citation needed]

In April 2007, Walsh began dating 20th Century Fox executive Alex Young. Young proposed to Walsh during a trip to San Francisco, California.[27] They married on September 1, 2007 at the Ojai Presbyterian Church in Ojai, California.[28] On December 11, 2008, Young filed for divorce, citing irreconcilable differences; the official date of separation in the divorce petition was listed as November 22.[29] On December 24, 2008, Walsh counterfiled for divorce, contesting the date of separation listed in Young's divorce papers.[30] The divorce was finalized on February 5, 2010.[31]

In September 2017, Walsh revealed that she was diagnosed with a benign meningioma in 2015. She underwent surgery and had the tumor successfully removed. Walsh took a nine-month break to recover.[32]

Since the summer of 2007, Walsh has been the spokesperson for Narcolepsy Network, working to promote national awareness of narcolepsy through infomercials and DVDs.[33] In January 2008, Walsh participated in a video for Democratic presidential candidate Barack Obama called, "Yes We Can", produced by will.i.am of The Black Eyed Peas.[34] She also campaigned for Obama in Arizona, Texas, Nevada, and Pennsylvania.[35] In July 2008, Walsh was nominated as a candidate on the Unite for Strength slate for a place on the national governing board of the Screen Actors Guild (SAG) in elections scheduled for September 18, 2008.[36] On September 18, 2008, Walsh was elected to serve on the SAG board for a three-year term. Walsh ran as a candidate with the Unite for Strength party who won six of the 11 Hollywood Division seats which were up for contention in the recent Screen Actor's Guild National Board elections.[37]

Walsh supports pet adoption and frequently campaigns for the cause. On February 7, 2008, she cut the ribbon to a new dog adoption center named Pedigree(R) Dogstore in Times Square.[38] In 2005, Walsh joined the Planned Parenthood Federation of America (PPFA)'s Board of Advocates, and in 2008 received the PPFA Maggie Award for an Artist who Stands Up for Reproductive Health and Freedom. She has participated in numerous Planned Parenthood activities, including national fundraisers, local Planned Parenthood affiliate events, the PPFA Awards Gala, and lobby day on Capitol Hill promoting the need for comprehensive sex education. In January 2009, she spoke at the Planned Parenthood Presidential Inauguration Brunch in Washington, D.C.[39]

As announced in late 2009, Walsh partnered with the ocean conservancy and advocacy group Oceana to call for increased sea turtle protections. She joined experts from the group on a trip to the Virgin Islands to witness the turtles' hatching and moving to the sea. In her own words: "I want to get the word out and make people aware about the challenges facing sea turtles. I also want to help get legislation enacted to keep harmful fishing techniques to a minimum and help protect the sea turtles."[40]

Walsh referenced Oceana during a September 16, 2010 appearance on The Tonight Show with Jay Leno. She told Jay Leno that her dress was covered in sushi and sashimi as an homage to a dress made of beef worn by Lady Gaga at the 2010 MTV Video Music Awards. While she claimed it was sustainable seafood, Walsh later admitted via her Twitter account that the sushi was fake.[41] She attended a meeting on Capitol Hill in which they marked the one year anniversary since the BP oil spill.[42] On November 3, 2012, Walsh spoke in Dubuque, IA during one of President Obama's campaign stops days before Election Day.

During the 2016 election, Walsh was a supporter of Hillary Clinton, publicly endorsing her and campaigning for her several times in California, Arizona, and Virginia.[43]