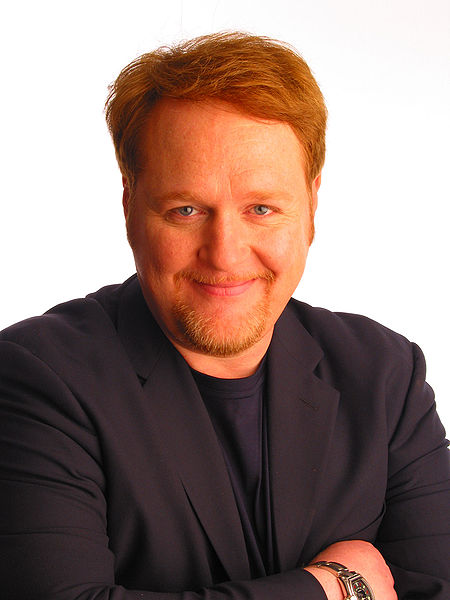 Nicholas Bakay (/bəˈkeɪ/ bə-KAY;[1] born October 8, 1959) is an American actor, voice actor, writer, comedian and sportscaster. He is known as the voice of Salem Saberhagen on ABC/The WB's Sabrina the Teenage Witch and Sabrina: The Animated Series, and Norbert Beaver on The Angry Beavers. He played Karl on the Fox series 'Til Death as well as serving as a producer of the show until it was cancelled by Fox.[1]

Nicholas Bakay was born on October 8, 1959 in Buffalo, New York, where he attended Nichols School. He graduated from Kenyon College in 1981.[citation needed] He has Hungarian roots (his surname means "from Baka").[2]
Read more...

Bakay served as a writer of Sabrina the Teenage Witch, in which he also voiced Salem Saberhagen, a warlock who has been transformed into the Spellman family's pet cat for trying to take over the world. Bakay also served as a writer for Sabrina: The Animated Series, also providing his voice as Salem as well. He was also the voice of Norbert on The Angry Beavers.

Bakay is also an avid sport writer and commentator. He writes a weekly column for NFL.com called "Nick Bakay's Manly House of Football", as well as occasional columns for ESPN.com and ESPN The Magazine. He appears on SportsCenter on ESPN Wednesday and Thursday mornings during NFL season, and has frequently done segments on NFL Total Access on NFL Network. Bakay also has guest hosted numerous episodes of Up Close and Talk2, as well as contributed to Jim Rome Is Burning and numerous other sports shows.

Early in his career he wrote the storylines for the Evil Clown Comics series which appeared in National Lampoon magazine. From 1993-1994, he was a writer for the comedy sketch series In Living Color, and appeared as Stu Dunfy, the host of the fictional game show The Dirty Dozens. He worked at Comedy Central, writing and appearing on numerous shows, including Night After Night with Allan Havey and Sports Monster.[3]

In 2006, Bakay created, wrote and voiced a cartoon for Comedy Central called The Adventures of Baxter and McGuire, which was nominated for an Emmy in the "Best Broadband Comedy" category.[4]

In 2013, Bakay began as a producer for the series Mom. Bakay also voiced the self-help radio announcer throughout the series.

Bakay has guest-starred on numerous TV sitcoms. He appeared on In Living Color in a semi-recurring role as Stu Dunfy, guest-host of the sketch "The Dirty Dozens" (and other voice work). He also appeared on the Seinfeld episode "The Smelly Car" where Bakay played Elaine's boyfriend who is so great in the episode's beginning because he "pillages and plunders" but later can't bear being with Elaine because of the intense body odor Elaine acquired from being in Jerry's car.

Bakay was seen or heard on That '70s Show. In the episode "Ski Trip", Bakay played Gus, a gay truck driver attracted to Kelso. In another episode, he was the voice of Donna's journal. In "An Eric Forman Christmas", he was the voice of Santa Claus in Kelso's Rankin-Bass-modeled dream.

Bakay had numerous recurring roles (such as Father McDaniel, Gus and miscellaneous voice work) on The King of Queens, which he also served as a producer and writer on. In the popular sitcom Ellen, Bakay starred as bookstore employee Lloyd in the 2nd series' 10th episode, alongside comedian Ellen DeGeneres.

He also had roles on The Simpsons and Sabrina the Teenage Witch as Salem. He was the side-kick on two late night talk shows: Night After Night with Allan Havey and Dennis Miller's short-lived show.

Bakay met his wife Robin while working at Comedy Central, where she was writing and producing on-air promos. They married in February 1994 and have two children together.