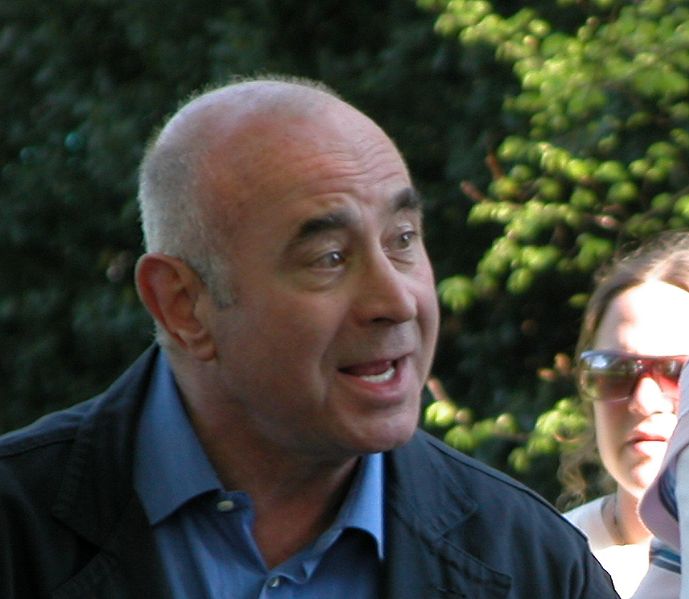 Hoskins was born in Bury St Edmunds, West Suffolk, on 26 October 1942 to Robert Hoskins, a bookkeeper and lorry driver, and Elsie (née Hopkins) Hoskins, a cook and nursery school teacher.[2][3] His grandmother was Romani.[4] From two weeks old, he was brought up in Finsbury Park, London.[5] He attended Stroud Green Secondary School; however, his dyslexia meant he was written off as stupid:[6] he left school at the age of 15 with a single O-Level and worked as a porter, lorry driver, plumber and window cleaner. He started on a 3-year accountancy course but dropped out.[7][8] He spent half a year in Israel on a kibbutz, and two years in Syria tending the camels of a Bedouin tribe.[8]

In 1968, Hoskins' acting career began at the Victoria Theatre, Stoke-on-Trent, in which he portrayed a servant named Peter in a production of Romeo and Juliet.[9] A year later in 1969, while waiting for his friend, actor Robert Frost, within the bar at the Unity Theatre in London, England, Hoskins found himself being auditioned for a part in a play at the theatre, after being handed a script and told "You're next.".[10] His audition proved a success, leading to Frost becoming his understudy. Frost considered Hoskins to be "a natural", recalling that "He just got up on stage and was brilliant."[11]

Hoskins' first major television role was in On the Move (1975-6),[12] an educational drama series directed by Barbara Derkow intended to tackle adult illiteracy, in which he portrayed the character of Alf Hunt, a removal man who had problems reading and writing. According to eventual producer George Auckland, up to 17 million people watched the series.[13] His breakthrough in television came later in the original BBC version of Dennis Potter's innovative 6-part fantasy-drama Pennies from Heaven (1978), in which he portrayed adulterous sheet music salesman Arthur Parker. After the drama's conclusion, he went on to portray Iago in Jonathan Miller's BBC Television Shakespeare production of Othello.[14] In 1983, Hoskins' voice was used in an advert for Weetabix and during the late 1980s and early 1990s, he appeared in advertising for the recently privatized companies of British Gas and British Telecom (now BT Group).[15][16] Other works in television, made by the BBC, included Flickers, portraying Wilkins Micawber in David Copperfield (1999), and The Wind in the Willows (2006).

Hoskins is more recognised for his cinematic performances. British films, such as The Long Good Friday (1980) and Mona Lisa (1986), won him the wider approval of critics, with the latter film also winning him a Cannes Award, Best Actor Golden Globe, BAFTA Awards, and an Academy Award nomination for Best Actor. Some of Hoskins other works in film included: delivering comic turns in Terry Gilliam's Brazil (1985); portraying Smee in Hook (1991) and in Neverland (2011); starring opposite Cher in Mermaids (1990); portraying Nikita Khrushchev as a political commissar in Enemy at the Gates (2001); and playing Uncle Bart, the psychopathic and violent "owner" of Jet Li in Unleashed (aka Danny The Dog). He also received a small role as Pink Floyd's manager in The Wall. Hoskins is noted for directing two films that he also starred in - The Raggedy Rawney (1988) and Rainbow (1996) - and producing Mrs Henderson Presents alongside Norma Heyman, in which he received a Golden Globe nomination for Best Supporting Actor for his performance in the film.[17]

One of Hoskins' highest points in his film career was in 1988, in which he portrayed private investigator Eddie Valiant in the Disney, Touchstone, and Amblin Entertainment live-action/animated family blockbuster, Who Framed Roger Rabbit (1988). Hoskins was not the first choice for the role; Harrison Ford, Bill Murray,[18] and Eddie Murphy were all considered for the part,[19] but film critics agreed that Hoskins was perfect for the role, the most prominent among them being Gene Siskel and Roger Ebert.[20] As Hoskins' character interacts and makes physical contact with animated characters in the film, Hoskins was required to take mime training courses in preparation, though he suffered from hallucinations for months, after production on the film had ended.[21][22][23] His performance in the film led to him being nominated for a Golden Globe Award, as well as winning him a British Evening Standard Award.

When there were concerns over whether Robert De Niro would portray the character of Al Capone in The Untouchables, Hoskins was slated to be a last-minute replacement in the event that De Niro refused the role. When this didn't happen, director Brian De Palma mailed Hoskins a cheque for £20,000 with a "Thank You" note, which prompted him to call up De Palma and ask him if there were any more films he did not want him to be in.[24] One of Hoskins' worst experiences in his career was his portrayal of Mario in Super Mario Bros. (1993). In an interview he had with The Guardian in 2007, Hoskins stated that he regretted starring in the film, revealing that he was extremely unhappy with the film and greatly angered by his experiences making it, referring to it as the "worst thing I ever did".[3] He was injured several times on set, spent most of the time with co-star John Leguizamo getting drunk to escape boredom, and had no idea the film was based upon a video game until his son told him.[8]

In 2007, Hoskins appeared in the music video for Jamie T's single "Sheila". [25] In 2009, he made a return to television in Jimmy McGovern's drama serial The Street, where he played a publican who opposes a local gangster. For this role, he received his only Emmy when he won Best Actor at the 2010 International Emmys. In 2011, In Search of La Che featured a character named Wermit and every line of his dialogue was a quote of Bob Hoskins.[26]

On 8 August 2012, Hoskins announced his retirement from acting after being diagnosed with Parkinson's disease in 2011.[27]

In 1967, aged 25, Hoskins spent a short period of time volunteering in kibbutz Zikim in Israel, and also herded camels in Syria.[28][29][30] When asked in an interview which living person he most despised, Hoskins named Tony Blair and said that "he's done even more damage than Thatcher". He despised Blair to the point that he decided in 2010, for the first time in his life, not to vote for Labour, by then led by Gordon Brown.[31][32] He made light of his similarities with film actor Danny DeVito, whom he joked would play him in a film about his life.[33]

In August 2012, Hoskins retired from acting after being diagnosed with Parkinson's disease in 2011.[35]

After his death, Robert Zemeckis, the director of Who Framed Roger Rabbit, said that Hoskins brought enjoyment to audiences worldwide.[37] Among the actors who paid tribute at his funeral were Stephen Fry, Samuel L. Jackson, and Helen Mirren, who said that "London will miss one of her best and most loving sons".[14][38]

Report a problem
Biography of Bob Hoskins at FanPal • 2021