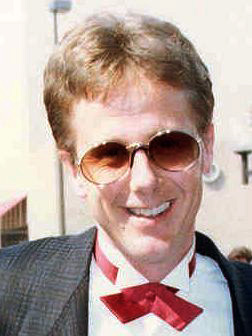 In addition to eight appearances on Saturday Night Live between 1981 and 1985, Anderson had a recurring guest role as con man Harry "The Hat" Gittes on Cheers, toured extensively as a magician, and did several magic/comedy shows for broadcast, including Harry Anderson's Sideshow (1987). He played Richie Tozier in the 1990 miniseries It, based on the Stephen King novel of the same name.

Harry Anderson was born October 14, 1952 in Newport, Rhode Island.[2] Anderson spent much of his childhood moving from performing on the streets of Chicago, New York, St. Louis and New Orleans before landing in California at the age of 16.[3] He was drawn to the art of magic in his youth.[4] After moving to Los Angeles, he practiced his skills often.[4] He joined the Dante Magic Club in his teens and reportedly made money as a street magician in San Francisco when he was 17.[5] He attended Buena Park High School before graduating from North Hollywood High School in 1970 as class valedictorian.[6][1] From 1971 to 1976 he lived in Ashland, Oregon, performing magic and working with the Oregon Shakespeare Festival.[7][8]

Anderson's many appearances on Saturday Night Live led to his role as Harry "The Hat" Gittes on several seasons of the television sitcom Cheers, and eventually as Judge Harry Stone on the long-running sitcom Night Court.[9] Anderson went on to appear in other television specials and shows, including 12 appearances on The Tonight Show Starring Johnny Carson.[10] As a magician, Anderson toured extensively and performed in comedy/magic shows for clubs and broadcast, including Harry Anderson's Sideshow in 1987.[4] In 1990, he starred in the television adaptation of Stephen King's It as the adult Richie Tozier.[11] From 1993 to 1997, Anderson starred in the television sitcom Dave's World, based loosely on the life and columns of humor columnist Dave Barry.[12]

Together with longtime friend Turk Pipkin, Anderson wrote a book called Games You Can't Lose: A Guide for Suckers, a collection of gags, cons, tricks, and scams.[9] First published in 1989 (ISBN 978-1-58080-086-0, 2001 reprint), this title also contains a survey of "Games You Can't Win" told from an insider's perspective.[13] He appeared with Criss Angel in a TV special called The Science of Magic, later released on DVD.[14]

In 2000, Anderson hosted the pilot for a potential revival of the classic panel game show What's My Line? for CBS primetime.[13][13]

He moved from Pasadena, California, to New Orleans in 2002.[9] In 2002, he and his second wife Elizabeth (whom he met in New Orleans while she was bartending)[15] opened a small shop in the French Quarter named "Spade & Archer Curiosities by Appointment", (later named "Sideshow"),[16] selling various "magic, curiosities, and apocrypha".[15]

In 2005, Anderson opened a nightclub in the French Quarter called Oswald's Speakeasy, located at 1331 Decatur Street at the corner of Esplanade Avenue.[17] He performed a one-man show there called Wise Guy.[18]

Anderson appeared in Hexing a Hurricane, a documentary about the first six months in New Orleans after Hurricane Katrina.[9][19] He and his wife Elizabeth sold Oswald's Speakeasy in October 2006.[19] Anderson continued to present his evening show Wise Guy, which was originally developed for his theater in New Orleans.[19]

In November 2008, Anderson played himself on an episode of 30 Rock along with fellow former Night Court cast members Markie Post and Charles Robinson.[20]

In his final years, Anderson appeared in television comedy specials such as in Comedy Bang! Bang! (2013) and Gotham Comedy Live (2014).[21] His final film portrayal was as Professor Kaman in the 2014 Christian drama film A Matter of Faith.[22]

Anderson was a longtime fan of singer Mel Tormé and his character Judge Stone on Night Court was also a Tormé fan; the singer appeared on the sitcom six times (as himself).[10] Night Court's creator Reinhold Weege stated that Anderson being a Tormé fan like his character was completely coincidental.[23] Anderson was among those who delivered eulogies at the singer's funeral in 1999.[24]

Anderson was married twice.[25] In 1977, he married Leslie Pollock . Leslie and Harry had two children together. They divorced in 1999. In 2000 he married Elizabeth Morgan . In 2006, Anderson and his wife Elizabeth moved from New Orleans to Asheville, North Carolina.[19]

In late January 2018, Anderson had a bout of influenza, and subsequently suffered several strokes. On April 16, 2018, Anderson died in his sleep of a stroke complicated by influenza at his home in Asheville at the age of 65.[26][5][9][10]

Report a problem
Biography of Harry Anderson at FanPal • 2021