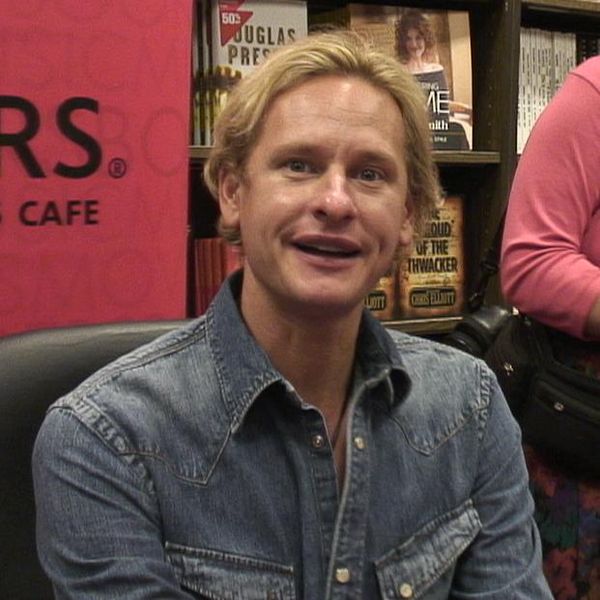 Carson Lee Kressley (born November 11, 1969)[1] is an American television personality, actor and designer. He was the fashion expert on the American television program Queer Eye, where he was one of the show's "Fab Five". He was also the motivational host of the TV show How to Look Good Naked and OWN's Carson Nation, as well as a contestant on season 13 of Dancing with the Stars. Since 2015, Kressley has been a judge on RuPaul's Drag Race.[2]

Kressley was born in Allentown, Pennsylvania,[1] and raised in the nearby unincorporated community of Orefield, Pennsylvania.[3] His family raised ponies and he competed in equestrian events from an early age, was a member of the U.S. World Cup Saddle Seat equitation team in 1999 and won a world championship in 2009.[4]

He graduated from Northwestern Lehigh High School in 1987, and in 1991 earned a bachelor's degree from Gettysburg College, where he was elected to Phi Beta Kappa and was a member of the service fraternity, Alpha Phi Omega.[3]

He began as an independent stylist, then worked for Ralph Lauren from 1994 until 2002, working in several areas including menswear and corporate advertising. His leap into television took place in 2003 when he gained great exposure as the "fashion savant" on Queer Eye when the show debuted on the Bravo cable television network. He remains active and visible on television as a fashion critic or commentator. Kressley frequently appears on Good Morning America and for the E! Network, among others, and has critiqued red carpet fashions at high-profile events such as the Oscars and the Golden Globes. In 2005, he acted as a judge for the Miss Universe pageant, which aired live from Bangkok, Thailand. In 2006, he returned to the Miss Universe pageant, but as commentator, and was also commentator for the 2006 Miss USA pageant.

In February 2007, he was announced as the host of new Lifetime makeover show, How to Look Good Naked (a U.S. version of a British series).[5] The show's premiere episode on January 4, 2008 drew record numbers for Lifetime—1.6 million viewers, which included significant numbers in the adults 18-49 and adults 18-34 demographics, as well as the network's target demo of women 18-34. In January 2008, the debut episode of How to Look Good Naked was Lifetime's highest-rated premiere in those three demographics.[6]

In May 2007, he acted as a judge on reality series Crowned: The Mother of All Pageants where mother and daughter teams compete in a beauty pageant.[7] Crowned debuted on The CW on December 12, 2007.

Kressley appeared as the Master of Ceremonies on Cyndi Lauper's True Colors Tour 2008.

He was a host on the ABC series True Beauty, along with Vanessa Minnillo and Beth Stern.

In 2011, Kressley began a show on the Oprah Winfrey Network titled Carson Nation.[8]

In September 2011, Kressley was a participant on the 13th season of Dancing with the Stars, partnered with professional dancer Anna Trebunskaya. Kressley proved to be a fan favorite, but was voted off week five of the competition.[9]

In 2015, Kressley and Ross Matthews were named as new regular judges for the seventh season of RuPaul's Drag Race.[10]

In May 2016, Kressley was announced as a commentator with Michelle Collins for the Eurovision Song Contest 2016 on Logo TV; the first time the United States has broadcast the competition live.[11]

In August 2016, Kressley appeared on Celebrity Family Feud with members of his family.

In January 2017, Kressley appeared as a contestant on The New Celebrity Apprentice.

In February 2017, Kressley became a celebrity contestant on the Australian version of I'm a Celebrity...Get Me Out of Here!.[12][13]

In August 2017, Carson Kressley started as a contestant on season 11 of Worst Cooks in America.

In December 2017, Kressley appeared as a contestant on The Chase.[14]

In November 2017, Kressley appeared as a commentator, alongside Lu Sierra, for Miss Universe 2017. The pair also commentated in May 2018 for Miss USA 2018.

Since the success of Queer Eye he has pursued various acting opportunities. In 2005, Kressley made his film debut in the movie The Perfect Man starring Heather Locklear and Hilary Duff, playing Lance, a bartender. He starred in The Year Without a Santa Claus with John Goodman as Santa, which aired December 11, 2006, on NBC. He had a cameo role in his third movie, the independent comedy 16 to Life. The feature film It's Christmas, Carol premiered December 2012.

In November 2006, Kressley debuted Perfect, his own clothing for men and women, on QVC.[15] He cites his experience as a stylist with Ralph Lauren and on Queer Eye as inspiration for the line, and says he "...realized a lot of people are missing great basics in their wardrobe. I consider my Perfect collection for QVC to be 'basics with a twist.'"[16] He debuted a new women's collection for Shop NBC in April 2012. The collection, called "Love, Carson", is built on transformative pieces that provide women with affordable glamour.[17]

In April 2006, Kressley became ordained over the Internet as a minister of the Universal Life Church, in order to be able to perform a wedding ceremony during an episode of Queer Eye.[19]

Kressley is also known as an owner of American Saddlebred horses and respected for his success as a horse show exhibitor.[20] He won a world title in 2009.[4] Kressley's interest in horses combined with his interest in promoting respect for diversity, resulted in his authorship of 'You're Different and That's Super!', illustrated by cartoonist Jared Lee.

Kressley is an ambassador for the Melbourne Cup, in 2007 playing a part in the 'Fashion On The Field'.[21]

In November 2006, Kressley competed on a celebrity edition of Jeopardy against Regis Philbin and Nancy Grace. Carson took second place, losing by one dollar.[22]