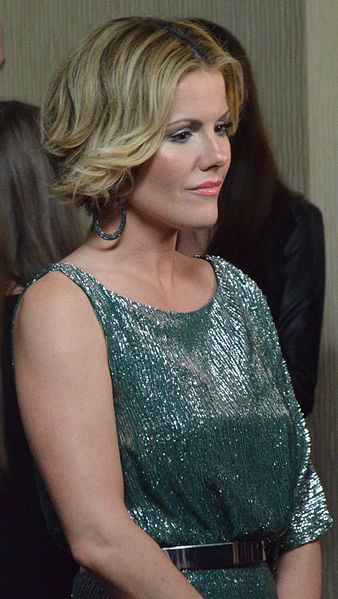 Kathleen Robertson (born July 8, 1973, in Hamilton, Ontario) is a Canadian actress. She is best known for her roles as Tina Edison in the Canadian sitcom Maniac Mansion (1990-1993) and as Clare Arnold in the Fox teen drama series Beverly Hills, 90210 (1994-1997). Robertson also starred in a number of films, and from 2011 to 2012 played the role of Kitty O'Neill in the Starz political drama series Boss. In 2014, Robertson began starring as homicide detective Hildy Mulligan in the TNT series Murder in the First.

Robertson was born in Hamilton, Ontario[1] and attended Sherwood Secondary School and Hillfield Strathallan College, a local private school. She started taking acting classes when she was ten and had roles in local theater productions. Her first television appearances were in The Campbells, My Secret Identity and E.N.G.[2]
Read more...

From 1990 to 1993, Robertson starred as Tina Edison, the eldest of three children of Dr. Fred Edison (Joe Flaherty), on the Canadian sitcom Maniac Mansion. This role earned her two nominations for Young Artist Awards.[3] She appeared in several small films and television shows, and did not debut on the big screen until her small role in the 1992 thriller film Blown Away, opposite Corey Haim and Nicole Eggert.[4] She also made her American debut in the 1992 made-for-television movie, Quiet Killer, co-starring Kate Jackson.

In 1994, Robertson was cast in the series regular role of Clare Arnold in the Fox teen drama Beverly Hills, 90210. She starred in the show from 1994 to 1997, during seasons four to seven.[5] In 1997, her ex-boyfriend, director Gregg Araki cast her as Lucifer, one of a group of bored, alienated, and very horny Los Angeles teens in the black comedy drama film Nowhere.[4][6] She later had a role in his other film, called Splendor (1999).[5] Robertson also has appeared in several films during her career. She appeared opposite Luke Wilson in romantic comedy Dog Park (1998), in Sally Field's directed comedy-drama Beautiful (2000), and the parody movie Scary Movie 2 (2001). She later had more serious roles with the 2002 independent drama film XX/XY, opposite Mark Ruffalo. In the same year, Robertson played the role of Evelyn Dick, a Canadian convicted murderer, whose trial remains the most sensationalized event in Canadian criminal history, in the made-for-television movie, Torso: The Evelyn Dick Story.[4] Robertson was nominated for an Gemini Award for her performance in the film.[4]

In 2002, Robertson starred as one of the leads in the short-lived Fox legal drama series Girls Club created by David E. Kelley.[5][7] She later appeared in a number of independent films, and had guest-starring roles on Law & Order: Criminal Intent, Medium, CSI: Miami, and Rookie Blue. In 2006, she appeared in Hollywoodland opposite Adrien Brody. From 2006 to 2007, she had the leading role in the Canadian comedy series, The Business. In 2007, she starred in the Syfy miniseries Tin Man as the primary antagonist of the story.[4]

In 2011, she was cast as Kitty O'Neill, Tom Kane's personal aide alongside Kelsey Grammer in the Starz original drama series Boss.[8] The series was cancelled after two seasons in late 2012.[9] Robertson also starred in a number of made-for-television movies in recent years, primarily for Lifetime network, including Last Exit (2006), and Time of Death (2013).[10] In 2013, Robertson portrayed the wife of hockey legend Gordie Howe in the made-for-television movie, Mr. Hockey: The Gordie Howe Story.[11] The biopic first aired in late April on CBC, and then made its US debut on the Hallmark Channel the first week in May.

In 2013, Robertson was cast as a lead in the TNT detective drama series Murder in the First co-created by Steven Bochco which debuted on June 9, 2014.[12][13][14][15] She plays the role of Hildy Mulligan, a homicide detective and single mother. In same year she starred in the thriller film The Vatican Tapes (scheduled to be released on February 27, 2015),[16] and was cast in recurring role as Jodi Morgan for the second season of A&E drama series Bates Motel.[17] Also in 2014, Robertson had the leading role alongside Eric Dane in the four-hour miniseries The Fixer.[18]

Robertson has been married to Chris Cowles since 2004. She gave birth to her first child, a son named William Robert Cowles, on July 9, 2008, at Cedars-Sinai Medical Center in Los Angeles.[21]