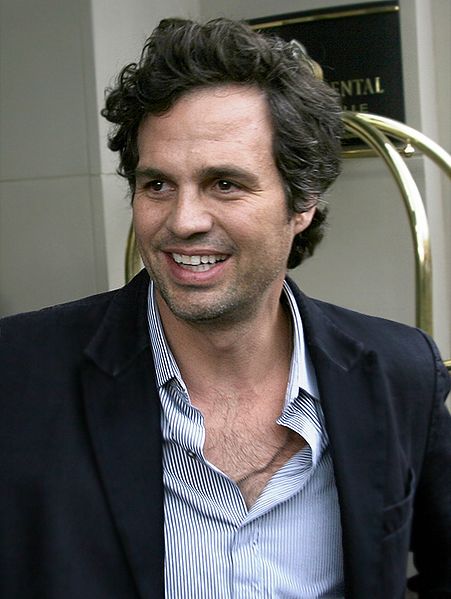 Mark Alan Ruffalo (/ˈrʌfəloʊ/; born November 22, 1967) is an American actor, filmmaker and activist who made his screen debut in an episode of CBS Summer Playhouse (1989), followed by minor film roles. He was part of the original cast of This Is Our Youth (1996). Following were his roles in 13 Going on 30 (2004), Eternal Sunshine of the Spotless Mind (2004), Zodiac (2007) and What Doesn't Kill You (2008). In 2010, he starred in the psychological thriller Shutter Island and the comedy-drama The Kids Are All Right. For the latter, he received nominations for the SAG Award, BAFTA Award, and the Academy Award for Best Supporting Actor. He also co-starred in the mystery films Now You See Me and Now You See Me 2 as FBI Special Agent Dylan Rhodes.[1]

Ruffalo gained international prominence by portraying the Marvel Comics character Bruce Banner / Hulk in the Marvel Cinematic Universe beginning with The Avengers (2012), Iron Man 3 (2013), Avengers: Age of Ultron (2015), Thor: Ragnarok (2017) and Avengers: Infinity War (2018) as well as the sequel to Infinity War (2019)--all movies ranking among the highest grossing films of all-time.

Ruffalo was born in Kenosha, Wisconsin. His mother, Marie Rose (née Hébert), is a hairdresser and stylist and his father, Frank Lawrence Ruffalo, Jr., worked as a construction painter.[2][3] He has two sisters, Tania and Nicole, and a brother, Scott (died 2008).[2] His father is of Italian descent, from Girifalco[4] and his mother is of half French Canadian and half Italian ancestry.[5][6]

Ruffalo attended both Catholic and progressive schools throughout his education. Ruffalo has described himself as having been a "happy kid",[7] although he struggled with undiagnosed dyslexia and ADD as a child and a young adult.[8]

Ruffalo spent his teen years in Virginia Beach, Virginia, where his father worked. He competed in wrestling in junior high and high school in Wisconsin and Virginia. At school, he sometimes went by the moniker Gavin Gruffallo. Ruffalo graduated from First Colonial High School in Virginia Beach, where he acted for the Patriot Playhouse taught by Nancy P. Curtis. He moved with his family to San Diego, California and later to Los Angeles, where he took classes at the Stella Adler Conservatory and co-founded the Orpheus Theatre Company.[2] With the theatre company, he wrote, directed and starred in a number of plays and spent close to a decade working as a bartender.[9]

Ruffalo had minor roles in films like The Dentist (1996), the low-key crime comedy Safe Men (1998) and Ang Lee's Civil War Western Ride with the Devil (1999). Through a chance meeting with writer Kenneth Lonergan, he began collaborating with Lonergan and appeared in several of his plays, including the original cast of This is Our Youth (1996), which led to Ruffalo's role as Laura Linney's character's brother in Lonergan's Academy Award-nominated 2000 film You Can Count On Me.[2] He received favorable reviews for his performance in this film, often earning comparisons to the young Marlon Brando, and won awards from the Los Angeles Film Critics Association and Montreal World Film Festival.[2]

This led to other significant roles, including the films XX/XY (2002), Isabel Coixet's My Life Without Me (2003), Jane Campion's In the Cut (2003), Michel Gondry's Eternal Sunshine of the Spotless Mind (2004), and We Don't Live Here Anymore (2004), which is based on two short stories written by Andre Dubus.[2] He appeared opposite Tom Cruise as a narcotics detective in Michael Mann's crime thriller Collateral (2004).[2]

In the mid-2000s, Ruffalo appeared as a romantic lead in View From the Top (2002), 13 Going on 30 (2004), Just Like Heaven (2005) and Rumor Has It (2005).[2] In 2006, Ruffalo starred in Clifford Odets' Awake and Sing! at the Belasco Theatre in New York, for which he was nominated for a Tony Award for Best Featured Actor in a Play.[2] In March 2007, he appeared in Zodiac as SFPD homicide inspector Dave Toschi, who ran the investigation to find and apprehend the Zodiac killer from 1969 through most of the 1970s.[2] In 2007, Ruffalo played divorced lawyer Dwight Arno, who accidentally kills a child and speeds away, in Terry George's film Reservation Road, based on the novel by John Burnham Schwartz.[citation needed]

In 2008, Ruffalo starred as a con man in The Brothers Bloom with Adrien Brody and Rachel Weisz and co-starred with Julianne Moore in Blindness. 2008 also saw Ruffalo in Brian Goodman's What Doesn't Kill You with Ethan Hawke and Amanda Peet, which was shown at the Toronto International Film Festival. In 2009, he played a brief role in the film Where the Wild Things Are as Max's mother's boyfriend. In 2010, he co-starred in the Martin Scorsese thriller Shutter Island as U.S. Marshal Chuck Aule, the partner of Leonardo DiCaprio's character Teddy Daniels.[10]

In 2010, he starred in Lisa Cholodenko's The Kids Are All Right, with Annette Bening and Julianne Moore. Ruffalo stated in an interview that he approached Cholodenko after watching High Art and said he would love to work with her. Years later, she called Ruffalo and said she wrote a script and had him in mind for the part. His performance earned him an Academy Award nomination for Best Supporting Actor.[11]

Ruffalo at the Toronto premiere of The Avengers, 2012

Ruffalo starred in The Avengers (2012), the sixth installment of the Marvel Cinematic Universe, replacing Edward Norton as Dr. Bruce Banner / Hulk.[12] Ruffalo received critical acclaim for his performance and is under contract to reprise the role in any future film appearances of the character produced by Marvel Studios.[12] Ruffalo also made a cameo appearance as Banner in Iron Man 3, making him the first actor to reprise the character in a live-action film. He reprised the role again in Avengers: Age of Ultron (2015), Thor: Ragnarok (2017),[13] and Avengers: Infinity War (2018), as well as its untitled sequel, set for release in 2019.

In 2014, Ruffalo starred as Ned Weeks in a television adaptation of Larry Kramer's AIDS-era play, The Normal Heart; his performance earned him an Emmy nomination. He says he has had an outpouring of support for his performance:

I've never had so sincere and vulnerable a response from people for anything that I've ever done.... And of everything that I've done since I've been on social media, which hasn't been that long, by the way, I haven't had such an overwhelmingly positive response as I have from The Normal Heart directly to me. And it's a blessing, man. If this is it, if I have a piano dropped on me tomorrow, then I would go down thinking, "You know what, I did okay as far as my career goes, because that's a gift. That's rare."[14]

He directed a number of plays during his time at the Orpheus Theatre Company, and made his feature film directorial debut with Sympathy for Delicious, which premiered at the Sundance Film Festival and won the Special Jury Prize. On releasing the film, Ruffalo said, "I'm still looking for distribution. I have a couple offers on the table, but I'm holding out for something a little bigger. I've been screening it for a lot of groups, and people are really responding to it. I think they're scared of that movie."[15]

Ruffalo is pro-choice. He has explained his opinion by saying: "I don't want to turn back the hands of time to when women shuttled across state lines in the thick of night to resolve an unwanted pregnancy, in a cheap hotel room."[16]

He has stated support for LGBTQ+ rights,[17] however he has received some criticism from the transgender community for supporting the casting of a man, Matt Bomer, to play a transgender woman in the film Anything, of which Ruffalo was an executive producer.[18]

In 2008, Ruffalo expressed concern that gas companies were eyeing his family's land in Callicoon, New York. After doing his own investigation, New York magazine wrote, he becomes "anti-fracking's first famous face."[19] On October 4, 2010, Ruffalo appeared on The Rachel Maddow Show to discuss hydraulic fracturing and the FRAC Act of 2009.[20] He claimed in the December 2010 issue of GQ magazine that after he organized screenings in Pennsylvania of a documentary about natural-gas-drilling called Gasland, he was placed on a terror advisory list.[21] The Department of Homeland Security denied the claim.[22]

Ruffalo has given interviews to We Are Change, a 9/11 'truth' group, in both 2007 and 2011.[23] Ruffalo stated: "I'm baffled by the way all three buildings came down. My first reaction was that buildings don't fall down like that.[24]

The Solutions Project is an organization founded by engineering professor Mark Z. Jacobson (Stanford University), Marco Krapels, documentary filmmaker/activist Josh Fox and Mark Ruffalo, with the aim of moving the United States towards 100% renewable energy, including the use of wind power and solar power.[25] The organization says this energy transition is mainly social and political in nature, not technical.[26]

In 2014, Ruffalo spoke out against Israel's Operation Protective Edge, Israel's 7-week war against Hamas, tweeting:[27] "Israel destroys el-Wafa hospital as staff evacuates all patients". After receiving criticism, Ruffalo responded: "Sorry, I thought blowing up Hospitals was something that all human beings could agree was off limits." Finally, in response to accusations of anti-Semitism, Ruffalo responded,[28] citing a Tikkun Daily article: "Empathizing w/ Gaza does NOT make me anti-Semitic, nor pro-Hamas or anti-Israel. It makes me human."

Ruffalo has suggested that the Zika virus is the inadvertent creation of a British biotech company that has been releasing genetically modified mosquitoes to combat dengue fever in Brazil.[32]

In June 2017, Ruffalo endorsed Labour Party leader Jeremy Corbyn in the 2017 UK general election. He tweeted: "Because @jeremycorbyn offers people an alternative to the Corporate status quo, which never ends well for them, I humbly endorse Corbyn."[35][36]

After completing work on the film The Last Castle, Ruffalo was diagnosed with a vestibular schwannoma, a type of brain tumor also known as an acoustic neuroma, and had surgery; the tumor was benign but resulted in a period of partial facial paralysis.[37] He recovered from the paralysis; however, he became deaf in his left ear as a result of the tumor.[38]

Ruffalo and his family primarily live in Manhattan.[43] Ruffalo also owns a house in Sullivan County, New York and in 2016 described the Catskill Mountains as his home.[44]