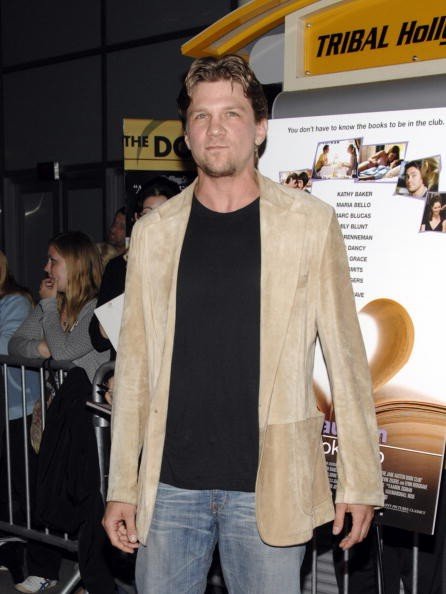 Marcus Paul Blucas (born January 11, 1972) is an American actor, known for playing Riley Finn in Buffy the Vampire Slayer, Matthew Donnelly in Necessary Roughness and recently, abolitionist John Hawkes in Underground. Prior to his acting career, he was known for playing college basketball with the Wake Forest Demon Deacons.

Walter Joseph Blucas married Mary Catherine (née Gordon) on January 10, 1970, shortly before both graduated in education from Indiana University of Pennsylvania (IUP).[2] They are divorced. Their son Marcus Paul Blucas was born in Butler, Pennsylvania on January 11, 1972,[3][4] two years after his sister, Kristen.[5] "A self-confessed square who earned good grades,"[1] Blucas was, like his father, a skilled sportsman.[6] Wally was the quarterback on the undefeated 1968 Big Indians team,[7] competed in the Boardwalk Bowl, and in 1999 was inducted into the IUP Athletics Hall of Fame.[5][8] The family moved to Girard in Erie, Pennsylvania in 1974, where Blucas' father rose from teacher to school principal and ultimately to Superintendent of Schools for the District.[5] Blucas became the star player on the Girard High School basketball team, leading them to the Pennsylvania Boys AA State Championship,[6] in the process earning all-state honors and a sports scholarship to Wake Forest University.[7][8] He played in the Wake Forest Demon Deacons men's basketball team and graduated in 1994 after one season playing on the same court as Tim Duncan. He was also a member of the Sigma Phi Epsilon fraternity.[9]

After Blucas failed to make it into the NBA, he moved to England, where he played professional basketball for a year with British Basketball League's Manchester Giants. He later decided to become a lawyer, but changed his mind and went into acting instead.[10]

Blucas's first television role was in the television movie Inflammable, made in 1995. From there, he found roles in both television and film. He starred as the Basketball Hero in Gary Ross's Pleasantville (1998). However, Blucas landed his first major role in 1999 as Agent Riley Finn in Buffy the Vampire Slayer. Initially, Blucas was certain that he had blown his audition and had left apologizing for having wasted creator Joss Whedon's time. Whedon asked him to audition again, and he received the part two weeks later.[11] He played Buffy's love interest until 2000.

After Blucas' departure from the series, he went on to act in such films as Summer Catch (2001), We Were Soldiers (2002), alongside Mel Gibson and Chris Klein, and First Daughter (2004), with Katie Holmes. His character in Summer Catch was based on real life Cape League baseball player Michael Macone.

In 2007, Blucas began to land leading roles in films such as Thr3e and The Killing Floor.

Blucas was part of the regular cast of the USA Network show Necessary Roughness for the first two seasons, playing Matthew Donnelly. The series premiered on June 29, 2011.

On July 25, 2009, Blucas married journalist Ryan Haddon, daughter of Dayle Haddon, and is stepfather to her two children from her first marriage to actor Christian Slater.[13]