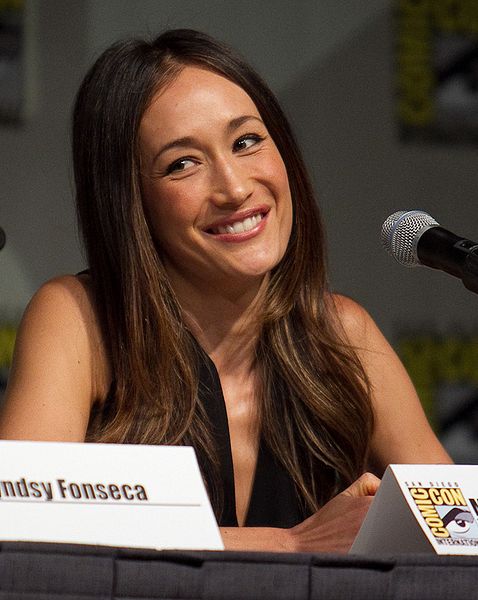 Margaret Denise Quigley[2] (born May 22, 1979),[3] professionally known as Maggie Q, is an American actress, model and animal rights activist. She is known for starring in the action films Mission: Impossible III and Live Free or Die Hard and played the title role of The CW's action-thriller series Nikita, airing from 2010 to 2013. In 2014, she portrayed Tori Wu in the film adaptation of Veronica Roth's novel Divergent, a role she reprised in its sequels, Insurgent and Allegiant.[4] Currently, she stars in the role of FBI Agent Hannah Wells in the political drama Designated Survivor.[5]

Q was born and raised in Honolulu, Hawaii.[6][7] Her father is of Irish and Polish descent[8] and her mother is a Vietnamese immigrant.[7][9] Her parents met while her father was stationed in Vietnam during the Vietnam War.[10][11] Q has four siblings,[7] and was raised Catholic.[12]

Q attended Mililani Waena Elementary School and Wheeler Intermediate School. She then attended Mililani High School, where she was on the cross country, track and field, and swim teams. She won the title of "Best Body" senior year, and graduated in 1997.[7] She won an athletics scholarship to a private university and intended to study veterinary science. Q's family was unable to assist her financially; she left Hawaii during the summer in hopes of earning enough money so that she could start her studies in the fall.[13]

Maggie Q, at the world premiere of The Warrior and the Wolf

At the suggestion of a friend, Q began modeling in Tokyo at the age of 17, before making an unsuccessful move to Taipei, and finally trying in Hong Kong, where she started going by the name Maggie Q because the Chinese couldn't pronounce Quigley properly.[7][10][14] She has said it was not easy for her: "I had twenty bucks in my pocket. I mean, I literally did the same thing that my mother did when she left Vietnam... didn't speak the language... had no money."[9] But, it was in Hong Kong that she was selected by Jackie Chan, because he saw a potential action star. His intensive training taught her the importance of professionalism and always doing her own stunts. Q later said, "I had never done a day of martial arts in my life when I started in the business. I couldn’t even touch my toes."[10]

In 1998,[15] she started her acting career in the TV drama House of the Dragon, which was a huge hit in Asia. In 2000, Q made her film debut as Anna in the horror film Model from Hell, and went on to star as an FBI agent Jane Quigley in the action thriller Gen-Y Cops the same year. Her appearance in Gen-Y Cops impressed Jackie Chan so much that she was cast in Manhattan Midnight and Rush Hour 2.[7]

In 2002, she starred as martial artist assassin Charlene Ching in the action film Naked Weapon. In 2004 she co-starred with Kelly Hu, Russell Wong and other Asian-American actors in a 30-second PSA produced by Mark Allen for CAUSE USA (Center for Asian Americans United for Self Empowerment), The Least Likely, encouraging Asian and Pacific Islander Americans to register and vote.[16][17][18][19] In 2005, Q played Harmony in the German-Singaporean TV mini-series House of Harmony, opposite Fann Wong. The same year she also co-produced the animal treatment documentary Earthlings narrated by Joaquin Phoenix.[20]

Maggie Q at Comic-Con 2013. Lyndsy Fonseca and Maggie Q at a panel for the television series Nikita at San Diego Comic-Con in July 2010.

In 2006 Q made her Hollywood breakthrough as co-star in Mission: Impossible III alongside Tom Cruise. She played Zhen, the only female member of the IMF team. In 2007, she appeared as Mai Linh in the Bruce Willis movie Live Free or Die Hard,[7] the fourth film in the Die Hard series, and as Maggie in Balls of Fury. In 2008, Q played fictional Cao Ying, a granddaughter of the warlord Cao Cao in Three Kingdoms: Resurrection of the Dragon, her first ancient Chinese costume performance. That same year, she also appeared in the drama/thriller movie Deception starring Ewan McGregor and Hugh Jackman, as Tina, an investment banker[15] who introduced Jackman's character to an exclusive anonymous sex club list. Q also stars in the video game Need for Speed: Undercover as the seductive lead character, federal agent Chase Linh, who is the player's only contact to the Tri-City Police.[21]

In 2010, Q became the lead character, an assassin gone rogue, on the CW series Nikita, based on the 1990 French film of the same name.[10] Since the premiere of Nikita, Q has been incorrectly described as the first Asian American series lead in an American television drama;[22] actress Anna May Wong is the first Asian American series lead of an American television series with her show The Gallery of Madame Liu-Tsong which aired 1951.[23] Q received mostly positive reviews for her role in the series.[24][25] The character was included in TV Guide's lists of "TV's Sexiest Crime Fighters" and "TV's Toughest Ladies".[26][27]

In 2014, Q played the role of Dauntless faction member Tori Wu, in the film Divergent, the adaptation of the same-titled novel.[4] Q reprised her role in the sequel to Divergent, The Divergent Series: Insurgent, which began filming on May 27, 2014 and was released on March 20, 2015. She also starred in the CBS drama series Stalker[28] by Kevin Williamson as Detective Beth Davis along with Dylan McDermott and Mariana Klaveno.[29] The series premiered on October 1, 2014 for the 2014-15 fall television season.[30][31] The series was ordered for a full season on October 27, 2014.[32] The series however was canceled after one season, leaving the show on a cliffhanger.[33] In October 2013, Q started filming for A Conspiracy on Jekyll Island, starring alongside Frank Grillo, AnnaSophia Robb, Dianna Agron, John Leguizamo, Ed Westwick, Mary McCormack, Christopher McDonald and Minnie Driver.[34] The film is directed by Aram Rappaport and produced by Hilary Shor, Atit Shah and Aaron Becker. Jekyll Island is set to release in 2016.[35]

She reprised her role in The Divergent Series: Allegiant, the third installment of the Divergent series, which was released on March 18, 2016.[36] In February 2016, it was announced that she would co-star opposite Kiefer Sutherland in the ABC drama series Designated Survivor as Hannah Wells, a leading FBI agent.[5] The show was renewed by Netflix for a third season which will air sometime in 2019.[37]

She has five tattoos: cross on her right forearm, Tibetan script and little triangle on her left forearm, African adverb on her side and one of a phoenix on her left hip, which she has had to conceal for most of her roles except Nikita.[40] Q also suffered temporary hearing loss in her right ear, when her eardrum was blown out in an explosive stunt.[41]

Q is outspoken on the subject of animal rights and has taken part in PETA Asia's campaigns promoting vegetarianism. In a PETA ad, she posed nearly nude in a bed of crimson chili peppers to spread the word that going vegetarian is the best way to "spice up your life" as well as help animals, one's health, and the environment. A second ad for PETA Asia features her wearing a bikini made entirely of strategically placed lettuce leaves next to the tagline "Turn Over a New Leaf - Try Vegetarian!"[45]

A vegetarian for many years, she has said that giving up meat is one of the most rewarding decisions she has ever made. "I feel better, I have more energy, on, and off the set, and I have the satisfaction of knowing that I'm doing something to help stop animal suffering." In 2008, Maggie Q was named PETA Asia-Pacific's "Person of the Year".[46] The same year, the organization also listed Q as one of the "Best-Dressed Celebrities" of 2008. She has since taken the step to cut all animal products from her diet by becoming a vegan.[47] PETA declared her to be one of three "Sexiest Vegans' of 2017.[48]