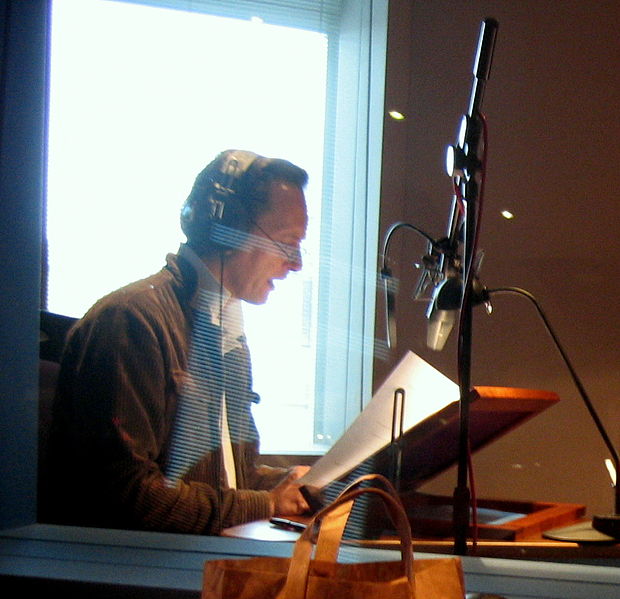 Richard E. Grant (born Richard Grant Esterhuysen;[2][3] 5 May 1957) is a Swazi-English actor.[4] He came to public attention in 1987 for playing Withnail in the film Withnail and I, and achieved recognition as John Seward in the 1992 film Bram Stoker's Dracula and Zander Rice in the 2017 superhero film Logan. He played Izembaro in the sixth season of the HBO series Game of Thrones and the Great Intelligence in the seventh series of Doctor Who. He will appear in Star Wars: Episode IX (2019) in a currently undisclosed part.

Grant was born Richard Grant Esterhuysen in Mbabane, Swaziland. His father, Henrik Esterhuysen, was head of education for the British government administration in the British Protectorate of Swaziland.[5][6] He has English, Dutch/Afrikaner, and German ancestry.[7]

As a boy, Grant went to primary school at St Mark's, a local government school in Mbabane that had only recently become racially integrated. When Grant was ten years old, he witnessed his mother commit adultery on the back seat of a car with his father's best friend, which subsequently led to his parents' divorce.[8] This event inspired Grant to keep a daily diary, which he has continued to do ever since.[9] Grant wears a watch on each wrist, one given to him by his dying father, permanently set on Swaziland time.[10] He is a dual citizen of the United Kingdom and Swaziland.[11]

Grant attended secondary school at Waterford Kamhlaba United World College of Southern Africa (UWCSA), an independent school just outside Mbabane, where he was a day scholar. Grant studied English and drama at the University of Cape Town. He adopted his stage name when he moved to Britain as an adult and registered with Equity.

Grant was a member of the Space Theatre Company in Cape Town before moving to London in 1982. He later stated, "I grew up in Swaziland when it was mired in a 1960s sensibility. The kind of English spoken where I grew up was a period English sound and when I came to England people said, 'how strange'. Charles Sturridge, who directed Brideshead Revisited for TV, said, 'you speak English like someone from the 1950s'."[12]

Grant's first film role was the perpetually inebriated title character in Withnail and I, which has established a large cult following. Following this film, Grant started appearing in Hollywood films, quickly establishing himself as a powerful character actor in a wide array of films, from blockbuster studio movies to small independent projects. Over the past twenty years, Grant has had strong supporting roles in the films Henry & June, L.A. Story, The Player, The Age of Innocence, The Portrait of a Lady, Spice World, Gosford Park, Bright Young Things, and Penelope.

While filming L.A. Story with Steve Martin, the pair communicated by fax in what became for both a hilarious dialogue: "I kept these faxes, which grew to a stack more than 2in thick, because they entertained me, and because I thought they were valuable aesthetic chunks from a screeching mind, a stream-of-consciousness faucet spewing sentences - sometimes a mile long - none of it rewritten, and bearing just the right amount of acid and alkaline."[13]

In 1995, Grant starred as the titular character in Peter Capaldi's short film Franz Kafka's It's a Wonderful Life. The film won the 1995 Academy Award for Best Live Action Short Film.

He released a single and accompanying video "To be or not to be" with Orpheus in 1997.

Grant has twice portrayed the Doctor from Doctor Who, both outside the main continuity. In the comedy sketch Doctor Who and the Curse of Fatal Death, he portrayed a version of the Tenth Doctor, referred to as the Quite Handsome Doctor. He also voiced a version of the Ninth Doctor for the BBC original animated webcast Scream of the Shalka. The latter had intended to be the official Ninth Doctor prior to the revival of the TV series. In August, 2012, the BBC announced that Grant would join the cast of Doctor Who for "The Snowmen", in which he plays a villain, Walter Simeon.[14] He appeared again in the following episode, "The Bells of Saint John" as the Great Intelligence, one of the Second Doctor's most infamous villains and, prior to "The Snowmen" (played by Ian McKellen), was last seen in The Abominable Snowmen and The Web of Fear. Grant reprises the role in the series 7 finale, "The Name of the Doctor".

Grant as The Voice for 2+2+2 at Heavy Entertainment, London.

On 1 December 2006, Grant turned real life investigator when, with the help of BBC Newsnight, he exposed a $98 million scam to sell a bogus AIDS cure.[15][16]

On 22 November 2007, he gave a keynote speech at North London Collegiate School in north London as part of their Performing Arts Centre Opening Festival,[17] and presented the 2008 Laurence Olivier Awards.[18]

In 2008, he made his musical theatre debut with Opera Australia, playing the role of Henry Higgins in My Fair Lady, at the Theatre Royal, Sydney, a role he reprised in 2017 at the Lyric Opera of Chicago.

In 2009. he played Alain Reille in Yasmina Reza's one-act play God of Carnage at the Theatre Royal, Bath: and subsequently at Cheltenham, Canterbury, Richmond, Brighton and Milton Keynes.[19]

In 2010 he made an appearance in a music video, when short lived Bristol band The Chemists hired him to appear in their video for "This City"; the band split the same year. This appearance also followed up his previous involvement with the band the year before, in which he spoke the lyrics to "This City" to background music, as part of the intro and outro tracks on their only album Theories of Dr Lovelock.

Grant has written an autobiography and a novel called By Design that is set in Hollywood.

Richard E. Grant was a mentor on the British Airways Great Britons Programme.[20]

In March 2013 Grant starred as intelligence analyst Brian Jones in David Morley's drama The Iraq Dossier, with Peter Firth, Anton Lesser, David Caves, and Lindsay Duncan. It recounted the story of how British Ministry of Defence Intelligence expert Jones had tried to warn that his government's September Dossier on Iraq's Weapons of Mass Destruction was inaccurate.[21]

On 9 May 2015 Grant gave a reading at VE Day 70: A Party to Remember in Horse Guards Parade, London.

In 2017, he starred as Zander Rice, the main antagonist of Logan, opposite Hugh Jackman, in which he gained positive critical reception for his performance.

In July 2018, Lucasfilm announced that Grant would appear in Star Wars: Episode IX.[23]

Grant wrote and directed the 2005 film Wah-Wah, loosely based on his own childhood experiences. A screenwriter recommended he write a screenplay, after reading Grant's memoirs of his Withnail and I experience.

The film took him over seven years to complete,[24] and starred Nicholas Hoult in the lead role, with Gabriel Byrne, Miranda Richardson, Julie Walters and Emily Watson.

Grant kept a diary of the experience, later published as a book (The Wah-Wah Diaries). The book received positive reviews from critics, many of whom were impressed by the honesty of the tale, especially in regard to his difficult relationship with the "inexperienced" producer Marie-Castille Mention-Schaar.[25][26][27]

Grant stated in subsequent interviews that she was a "control freak out of control", and that he would "never see her again as long as live."[28][29] In a BBC interview, he again mentioned his "disastrous" relationship with Mention-Schaar. He related that he had received only five emails from her in the last two months of pre-production, and that she rarely turned up on the set at all. She failed to obtain clearance firstly for song rights, and secondly to film in Swaziland. For the last infraction Grant was eventually forced to meet with the King of Swaziland to seek clemency.[30]

During an interview with an Australian chat show, he mentioned that Wah-Wah was not released in France, and as a result, his producer did not make money out of it.[31]

Grant married voice coach Joan Washington in 1986 and has one daughter with her (Olivia) and a stepson (Tom).

Grant is a teetotaller. He is intolerant to alcohol, having no enzymes in the blood to metabolise it. If he does drink alcohol, he can keep it down for 10 minutes and is then violently sick for 24 hours afterward.[32] After casting him as the alcoholic Withnail, director Bruce Robinson made Grant drink a bottle of champagne and half a bottle of vodka during the course of a night so that he had experience of the sensation.[31]

He also appeared on BBC1's show Saturday Kitchen on 14 July 2007, where he stated he detests dairy products, while his favourite food is giant prawns on a bed of rice. In October 2008, he told The Times that he is an atheist.[33] He is an avid follower of West Ham United, and appeared on Sky Sports' Soccer AM to show his support for the team on the morning of the 2006 FA Cup Final.

Report a problem
Write to Richard E. Grant at FanPal • 2022