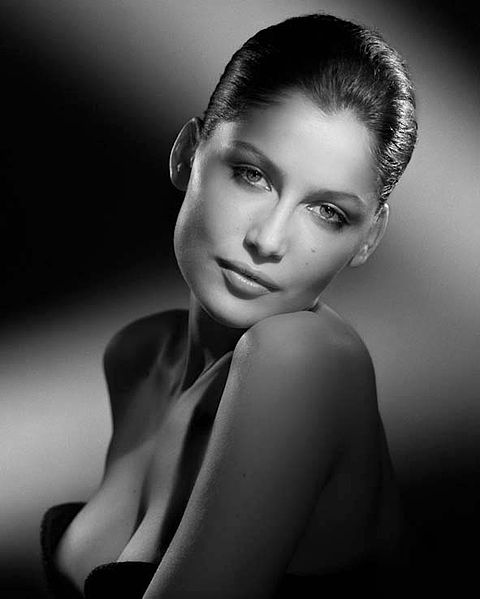 Laetitia Marie Laure Casta (born 11 May 1978)[3] is a French actress and supermodel.

Casta became a "GUESS? Girl" in 1993 and gained further recognition as a Victoria's Secret Angel from 1998 to 2000 and as a spokesperson for cosmetics company L'Oréal. She has appeared on over 100 covers of such popular magazines as Cosmopolitan, Vogue, Rolling Stone, Elle and Glamour, and has modeled for designers such as Yves Saint Laurent, Jean-Paul Gaultier, Chanel, Ralph Lauren, Tommy Hilfiger, J. Crew, Louis Vuitton, Givenchy, Roberto Cavalli, Lolita Lempicka, and Vivienne Westwood.

Casta became an established actress, appearing in the films Gainsbourg: A Heroic Life (2010), in which she portrayed sex symbol Brigitte Bardot, Face (2009) and The Blue Bicycle (2000), as well as the play Ondine at the theatre Antoine.

Laetitia Casta was born in Pont-Audemer, Normandy, France. Her mother, Line Blin, is from Normandy. Her father, Dominique Casta, is from Corsica. Casta has an older brother, Jean-Baptiste, and a younger sister, Marie-Ange. She spent her childhood in Normandy and Corsica.[4]
Read more...

Casta's modeling career reportedly began when she was discovered by the photographer Frederic Cresseaux,[5] during a family holiday in her father's native Corsica, at age 15.[6] After her unexpected registration by Jeeby, Casta was elected Miss Lumio 93.[7]

Casta has been the L'Oréal Paris brand ambassador since 1998.[8] She has been featured in Guess? Jeans, Tommy Hilfiger, Miu Miu, Pepe Jeans, Alberta Ferretti and XOXO ad campaigns. Casta has appeared on more than 100 magazine covers including Victoria's Secret catalogs, Harper's Bazaar,[9] ELLE magazine, and Vogue magazine. She walked down the annual Victoria's Secret Fashion Show in 1997, 1998, 1999, and 2000. Caste was one of the company's signature Victoria' Secret Angels from 1998 to 2000. She claims that her career with Victoria's Secret ended because she was "too much of rebel".[10] She also appeared in Sports Illustrated Swimsuit Issue three consecutive times, Rolling Stone, and the Pirelli Calendar 1999 by Herb Ritts and 2000 by Annie Leibovitz.

In 1999, Casta was ranked first in a national survey ordered by the French Mayors Association to decide who should be the new model for the bust of Marianne, an allegorical symbol of the French Republic, which stands inside every French town hall.[11]

Casta became the focus of a controversy[12] when, after being selected to be Marianne, newspapers in Britain and France[13] reported that she had relocated to London where taxes on high earners are lower. Casta's father said she went to London for professional reasons; on a TV show, she also said that she rented a flat in London to be near her boyfriend.[14] The French minister of the interior spoke about Casta on the radio;[15][16] comparing the advantages of living in France with regard to the drawbacks of London[17] after political opponents used Casta's relocation to London as an opportunity to criticise the government.[18][19]

She is the face of fragrances Chanel's Allure, Givenchy's Forbidden flower, Cacharel's Promise, Bulgari's BLV II, Ralph Lauren's Notorious, and on 15 June 2012 D&G's Pour Femme shot in Erice by Mario Testino.[20] The Parisians could follow her Adventures in the Galeries Lafayette by Jean-Paul Goude.[21] For Christmas 2011, Peter Lindbergh shot True Love, the very thought of Casta at the summit of Manhattan and between the snowy lions of marble of the New York Public Library for Tiffany & Co.[22] On 10 March 2010, in Paris, she opened the Louis Vuitton Fall/Winter 2010 fashion show.[23] On 27 September 2010, she closed the Roberto Cavalli SS 2011 fashion show in Milan.[24]

For her first movie, Casta has made forays into the blockbuster Asterix & Obelix Take On Caesar directed by Claude Zidi, a live-action film of the comic book Asterix; in which Obelix, portrayed by Gérard Depardieu, plays a love interest for Falbala.[25] Casta appeared in Les Ames Fortes, a dramatic film directed by Raul Ruiz.[26] Her interpretation of Brigitte Bardot in the movie Gainsbourg (Vie heroique) revealed the actress[27] who received her first nomination at the Cesar Award. Casta served as a jury member at the 69th Venice International Film Festival in 2012.[28]

On 6 April 2008, Casta demonstrated in a White March of nonviolent protest to ask for the immediate release of Ingrid Betancourt, presidential candidate kidnapped since 2002 by the FARC.[29] On 30 April 2002, she attended the demonstration Vive la République after the first round election of the 2002 presidential election.[30]

She was appointed as a UNICEF Goodwill Ambassador on 9 December 2016, committed to help the 250 million children living in conflict areas.[31]

On 19 October 2001, Casta gave birth to her daughter Sahteene, whose father is the photographer Stephane Sednaoui. Casta was engaged to Italian actor Stefano Accorsi. The couple has two children: a son named Orlando, born on 21 September 2006, and a daughter named Athena, born on 29 August 2009.[32] In June 2017, Casta married her then-boyfriend, French actor Louis Garrel.[33]