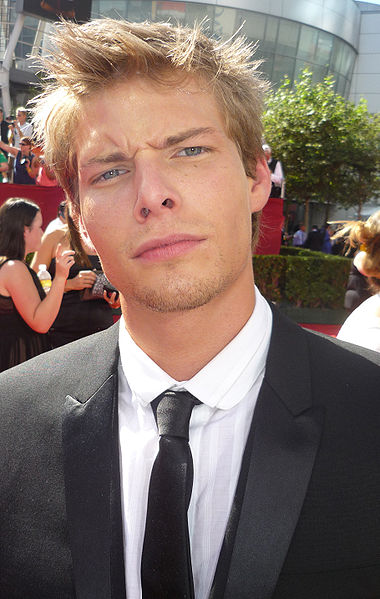 Hunter Parrish Tharp[1] (born May 13, 1987) is an American actor and singer. He is known for playing the role of Silas Botwin in the Showtime series Weeds and for his performances in the Broadway productions of Godspell in the role of Jesus and Spring Awakening as Melchior.[2]

Parrish was born in Richmond, Virginia, to Annie Parrish, who works with children with autism, and Bruce Tharp, an engineer. Parrish has an older brother.[3][4] He graduated from Plano Senior High School and Texas Tech University Independent School District.[5]
Read more...

After being seen at a showcase in New York, directed by Peter Sklar, Parrish was offered professional representation and went on to guest star in several television shows.[6] These include CSI: Crime Scene Investigation, Close to Home, Law & Order: Special Victims Unit and Summerland. He appeared in the films Sleepover and RV and The Good Wife. In Freedom Writers, Parrish played Ben Samuels, the only white student in a California high school class. The National Review Online wrote that Parrish had played the role with "unassuming humor".[7]

He portrayed the role of the older Botwin son, Silas, in the Showtime original series Weeds from 2005 to 2012. On August 11, 2008, Parrish joined the cast of the Tony Award-winning Broadway musical Spring Awakening in the lead role of Melchior Gabor at the Eugene O'Neill Theatre in New York City,[8] receiving critical acclaim. He remained in the role until the show closed on January 18, 2009.

In 2013 and 2014, he guest starred on The Good Wife as Jeffrey Grant, a young man accused of murder.[citation needed]

In 2017, Parrish was cast in the recurring role of Clay Haas in the second season of ABC's thriller series Quantico.[13]

In 2012, Parrish recorded his first EP called Guessing Games, featuring six songs. At first, Guessing Games was only available for sale in the lobby of Godspell's (his current music at the time) home at the Circle in the Square Theatre, but with a bigger release to follow. The first single from the EP, "Sitting at Home", was released on iTunes on June 7, 2012.[18] The complete EP was released later that month, on June 26.[19]