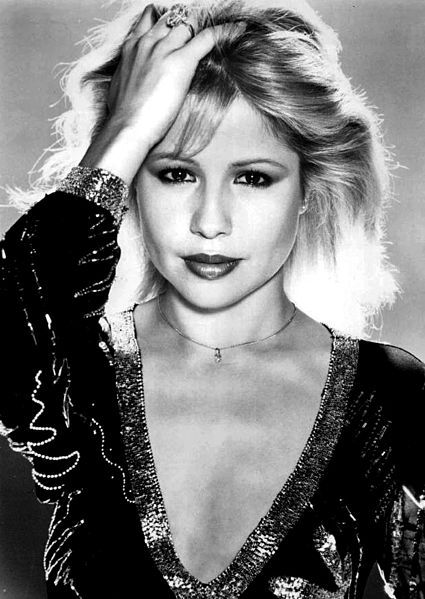 Pia Zadora (born Pia Alfreda Schipani, May 4, 1953)[1] is an American actress and singer. After working as a child actress on Broadway, in regional theater, and in the film Santa Claus Conquers the Martians (1964), she came to national attention in 1981, when following her starring role in the highly criticized[2] Butterfly, she won a Golden Globe Award as New Star of the Year,[3] while simultaneously winning the Golden Raspberry Award for Worst Actress and the "Worst New Star" for the same performance.

When in the 1980s Zadora's film career failed to achieve critical success, she switched her focus to music. As a singer Zadora has released several albums featuring popular standards, often backed by a symphonic orchestra.

Zadora was born Pia Alfreda Schipani in Hoboken, New Jersey. Her father, Alphonse Schipani, was an Italian-American violinist, while her mother, Saturnina (Zadorowski) Schipani, was a Polish-American theatrical wardrobe supervisor for Broadway productions and the Metropolitan Opera, as well as the New York City Opera.[4][5][6][7]

She adapted part of her mother's maiden name as her stage name. Zadora appeared as a child actress with Tallulah Bankhead in Midgie Purvis. She played the youngest sister (Bielke) in the Broadway production of Fiddler on the Roof (1964-1966).

Zadora's first film was in 1964's widely panned Santa Claus Conquers the Martians, as Girmar, a young Martian girl. She also sang "Hooray for Santy Claus" in that movie, which has become a fan favorite since its 1991 appearance on the movie-mocking TV show Mystery Science Theater 3000.

Zadora's acting career made little headway until, while touring with a musical production in 1972, she met Meshulam Riklis, 30 years her senior. The couple married on September 18, 1977. Not long after her marriage, Zadora had a breakthrough as the Dubonnet Girl, appearing in print and television commercials for the apéritif wine, in whose American distributor Riklis was a shareholder.[8]

Zadora starred alongside Stacy Keach and Orson Welles in the 1982 film version of James M. Cain's novel Butterfly, the plot for which involved father-daughter incest. Her character, Kady Tyler, was described as being the daughter of Keach's character Jesse Tyler. The musical score featured Zadora singing "It’s Wrong For Me To Love You". She won that year's Golden Globe Award as Best New Star of the Year, amid charges that Riklis had purchased the award with a promotional campaign that included Zadora's image presented prominently on Sunset Boulevard billboards,[9] an appearance in Playboy magazine, and entertaining Golden Globe voters.[10][11] Most critics panned her performance, however, and she received the 1982 "Razzies" for both "Worst New Star" and "Worst Actress."

Zadora next starred in the 1982 film Fake-Out, also called Nevada Heat, a women in prison B-movie comedy co-starring Telly Savalas and Desi Arnaz Jr.. In 1983 she appeared in the film adaptation of the Harold Robbins novel, The Lonely Lady, portraying an aspiring screenwriter who achieves success after surviving sexual assault. For this performance she received the 1983 Golden Raspberry Award for Worst Actress.[12] On the basis of being multiply recognized by the Golden Raspberry Awards, Zadora was named Worst New Star of the Decade (1980-1989) and nominated as Worst Actress of the 1980s.[13]

In 1985, Zadora starred as the object of an extraterrestrial's affections in the musical-comedy Voyage of the Rock Aliens. In addition to displaying her comedic side, the film showcased her musical talents and featured half of the songs from her 1984 album Let's Dance Tonight. In 1988, she appeared as a beatnik in John Waters's film Hairspray. In 2000, Zadora was nominated at the 20th Golden Raspberry Awards as Worst Actress of the Century, ultimately losing to Madonna.

Although as an actor Zadora's performances have generated critical hostility, she has attained greater critical success as a singer. Zadora's cover of the Shirley Ellis hit "The Clapping Song", recorded for the film score of The Lonely Lady in 1983, reached the U.S. top 40, and in 1984 she had a hit duet with Jermaine Jackson titled "When the Rain Begins to Fall" from the movie Voyage of the Rock Aliens. In 1985 she received a nomination for a Grammy Award for Best Female Rock Vocal Performance for the song "Rock It Out", losing to Tina Turner's "Better Be Good To Me". Also in 1985, Zadora released Pia & Phil, an album of standards with the London Philharmonic Orchestra,[14] and recorded a follow-up album in 1986 titled I Am What I Am.[15]

In 1988, Zadora worked with producers Jimmy Jam and Terry Lewis on an album entitled When the Lights Go Out. The album was released only in Europe, and the single "Dance Out of My Head" did not chart, despite the top producers and club remixes by Shep Pettibone and Ben Liebrand. In 1989, Zadora recorded the album Pia Z with producer Narada Michael Walden; this album also failed to chart. The single "Heartbeat of Love" included club remixes by Robert Civillés and David Cole of C + C Music Factory. Two additional albums/CDs of standards, Pia Today! (1988) and Only for Romantics (1991) received only limited promotional release.[16] A three-CD compilation, Pia - The Platinum Collection, was released in 1993 and sold in the United States via "infomercials". The album included repackaged versions of Pia & Phil, I Am What I Am', and Pia Today!.[17]

In 1994, Zadora had a cameo appearance in the comedy Naked Gun 33​1⁄3: The Final Insult. In her segment of the film, Zadora performed the Steve Allen-penned "This Could Be the Start of Something Big" during a parody of an Academy Awards musical number.

In 2011, Zadora began a small attempt at a comeback with a cabaret show titled Pia Zadora: Back Again, And Standing Tall. In February, she performed at the Eissey Campus Theatre in Palm Beach Gardens and the Kaye Auditorium in Boca Raton.[18] She took the show to The Rrazz Room in San Francisco on June 8 where it ran for five performances until June 12.[19][20][21][22] Zadora appeared at San Francisco's Rrazz Room's 3rd annual Rrazziversary Gala Celebration and Benefit for St. Jude Children's Research Hospital on March 17, 2011, and at the Nevada Children's Center's Great Gatsby Gala on April 3, 2011.

In 2012, Zadora performed with the Desert Symphony Orchestra at the McCallum Theatre in Palm Desert, California[23] and appeared on the TV show Celebrity Ghost Stories.[24]

Zadora married businessman Meshulam Riklis in 1977, when she was 23 and he 54. She was a marquee headliner at the Riviera Hotel in Las Vegas during the early 1970s due to her association with Riklis and Sinatra. Zadora and Riklis bought the Beverly Hills mansion Pickfair Manor in January 1988 from Los Angeles Lakers owner Jerry Buss for almost US$7 million. They demolished most of the structure while keeping the guest houses, claiming that termites and time had made repairs difficult.[25]

The mansion, which drew its name of "Pickfair" from having once been the shared home of Douglas Fairbanks and Mary Pickford, was torn down and a new 25,000-square-foot (2,300 m2) mansion was built on the property. Zadora later claimed on a September 2012 episode of BIO's Celebrity Ghost Stories that Pickfair was razed due to a troubling apparition which appeared to her and children when her husband was away on business. Riklis commissioned a nude oil portrait of Zadora, which greeted visitors.[9]

With first husband Riklis she has children Kady Zadora (born 1985) and Kristofer Barzie (born 1987).[26] Kady was named after Zadora's film character in Butterfly, which later inspired the call letters for station KADY-TV in Oxnard, California after Riklis acquired it in 1988. After he divested himself of his ownership, it changed its call letters to KBEH.

Zadora's second husband was writer-director Jonathan Kaufer. They were married from August 1995 to November 2001, and had one child, Jordan Maxwell Kaufer.[28]

Zadora has been married to Michael Jeffries, a detective with the Las Vegas Metropolitan Police Department, since 2005 and currently resides in Summerlin, Nevada.[29] Zadora and Jeffries met after Zadora contacted the Las Vegas Police to report a stalking incident.[30]

In June of 2013, Zadora was charged with domestic violence battery and coercion, and jailed after an altercation with her teenage son Jordan. She was taken into custody after a SWAT team surrounded her home.[31]