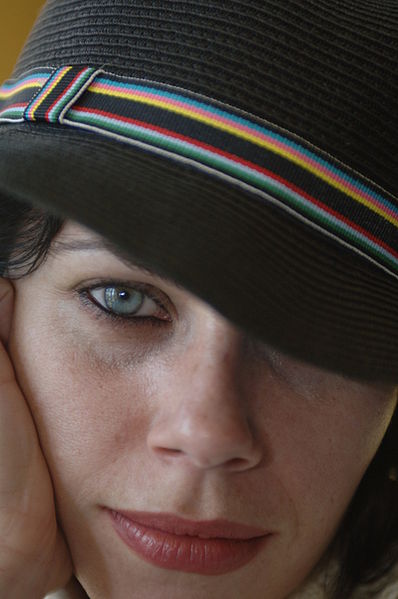 Fairuza Balk (born May 21, 1974) is an American film actress. She made her theatrical film debut as Dorothy Gale in Disney's 1985 film Return to Oz. Balk also appeared in Valmont, The Craft, The Island of Dr. Moreau, American History X, The Waterboy, Almost Famous, and Personal Velocity: Three Portraits.

Balk was born as Fairuza Alejandra Feldthouse in Point Reyes, California.[1] Until age two, Balk lived in Cloverdale, California with her mother. They then moved to Vancouver, British Columbia, where she began acting at age six. They moved to London and then to Paris for another role. They remained there for six months before returning to Vancouver. Balk moved to Los Angeles as a young woman upon signing to act in The Craft.[citation needed]

Fairuza's mother, Cathryn Balk, has studied, performed, and taught the ethnic and traditional dance forms of many countries including Egypt, Turkey, Morocco, and Spain.[2] Her father, Solomon Feldthouse, was one of the founding members of the 1960s psychedelic rock group Kaleidoscope, and is also a traveling folk musician.[3] He was born in Pingree, Idaho and, between the ages of 6 and 10, lived in Turkey where he learned Greek, Turkish, Iraqi, and Iranian music.[4] Balk has stated that her father is of Romani and Cherokee ancestry, and that her mother is of Irish and French descent.[5][6] She has a twin sister.

Balk's debut role was in a television film titled The Best Christmas Pageant Ever; it was produced in 1983. While in London, Balk was cast by Walt Disney Productions to star as Dorothy Gale in Return to Oz, the unofficial sequel to MGM's 1939 musical The Wizard of Oz.[7] This role led to other, minor roles, including that of Mildred Hubble in The Worst Witch, and in 1988, at age 14, she moved to Paris to work on Valmont with Miloš Forman. By 1989 she was back in Vancouver, where she attended high school.[citation needed] However, she soon decided to take correspondence courses instead and went back to Hollywood, where she gained increasing notice as an actress. In 1992 she was awarded an Independent Spirit Award as best actress for her performance in the Allison Anders film Gas Food Lodging.[citation needed]

In 1996, she appeared in a lead role in The Craft, in which her character formed a teenage coven with characters portrayed by Neve Campbell, Rachel True and Robin Tunney. Since then, Balk has continued to find roles, primarily dark ones. In 1996, she co-starred in The Island of Dr Moreau. In 1998, played a neo-Nazi goth-punk opposite Edward Norton in American History X, and was featured in The Waterboy, alongside Adam Sandler. Since 2000, she has appeared in over a dozen films. She has also done voice work for animated films, TV shows and video games, including Justice League, Family Guy, Grand Theft Auto: Vice City and Lords of EverQuest. The 2007 documentary Return to Oz: The Joy That Got Away was dedicated to her.

In 2011, Balk began to exhibit art in Los Angeles and New York. On August 4, 2012, she participated in the group show 'MiXTAPE', with other notable artists Mark Ryden, Camille Rose Garcia, Jessicka Addams, and Marion Peck. Artists were asked to pick a song and create art inspired by that song. Fairuza chose the song "Nuages" by Django Reinhardt and created a 16"x20"x12" mixed-media sculpture. The eclectic mix of songs chosen were featured for digital download on iTunes.[8][9][10]

In 2017, the emo puppet band Fragile Rock performed a song entitled "Fairuza Balk" on their NPR Tiny Desk Concert.[11] Balk tweeted that the song was "wonderful and hilarious" and made her year.[12]