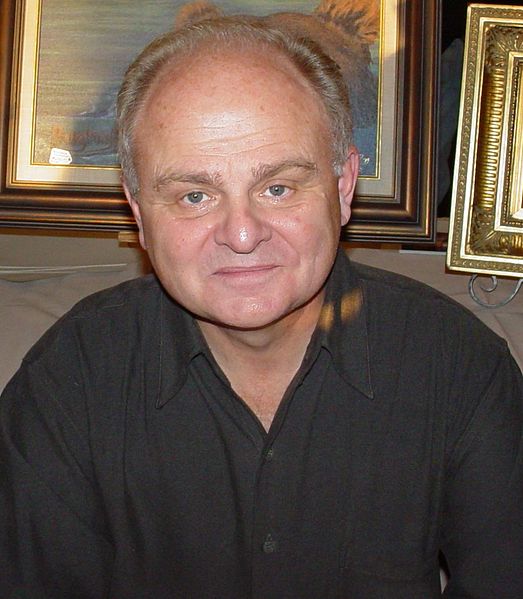 Gary Rich Burghoff (born May 24, 1943) is an American actor, known for playing Charlie Brown in the 1967 Off-Broadway musical You're a Good Man, Charlie Brown, and the character Corporal Walter Eugene "Radar" O'Reilly in the film MASH, as well as the TV series. He was also a regular on the hit TV game show Match Game during a period from 1974 - 1975 (beginning at episode 331), standing in for Charles Nelson Reilly for 140 episodes, who was in New York doing a Broadway play.

Burghoff was born in Bristol, Connecticut and later moved to Delavan, Wisconsin.[5]

He studied tap dance and became a drummer, despite having a congenital deformity of three fingers on his left hand.[2] He gained early experience acting with the Belfry Players of Williams Bay, Wisconsin[6]

In 1967 Burghoff originated the role of Charlie Brown in the original Off-Broadway production of You're a Good Man, Charlie Brown.

He was the drummer for a band called the Relatives in 1968. Actress Lynda Carter was the band's singer. The group opened at the Sahara Hotel and Casino lounge in Las Vegas, Nevada, and played there for three months. He and Carter remained friends, and she helped cast him in an episode of her later hit series The New Adventures of Wonder Woman, in the 1978 episode "The Man Who Wouldn't Tell".

Burghoff made his feature film debut in Robert Altman's M*A*S*H (1970). Although several actors from the original film made guest appearances in the television series, Burghoff was the only actor cast as a regular, continuing in the role of Radar O'Reilly. Although he ostensibly played the same character in the series that he played in the film, Burghoff has cited differences in the portrayal: "In the original feature film MASH, I created Radar as a lone, darker and somewhat sardonic character; kind of a shadowy figure. I continued these qualities for a short time until I realized that the TV MASH characters were developing in a different direction from the film characters. It became a group of sophisticated, highly educated doctors (and one head nurse) who would rather be anywhere else and who understood the nature of the 'hellhole' they were stuck in. With Gelbart's help, I began to mold Radar into a more innocent, naïve character as contrast to the other characters, so that while the others might deplore the immorality and shame of war (from an intellectual and judgmental viewpoint), Radar could just REACT from a position of total innocence."[7]

Burghoff was nominated for six Emmy Awards for M*A*S*H in the category of Outstanding Supporting Actor in a Comedy Series and, of those nominations, he won an Emmy in 1977. Burghoff's co-star Alan Alda accepted the award on his behalf.

Burghoff left M*A*S*H after the seventh season because of burnout and a desire to spend more time with his family, though he returned the following year to film a special two-part farewell episode, "Goodbye Radar". He explained, "Family, to me, became the most important thing... I was not available as a father because of my work. That doesn't stop when the work stops. Whenever you go out as a family, you're always torn from family to deal with public recognition."[8] As originally conceived, "Goodbye Radar" was supposed to be the final episode of season 7, but at the behest of CBS, it was expanded into a double-episode for the November sweeps the next season. Fellow cast member Mike Farrell tried to persuade Burghoff to stay on the show, citing the lackluster careers of former M*A*S*H regulars Larry Linville and McLean Stevenson after their departures.

Farrell later said, "Gary Burghoff may well have been the best actor in the company, it's always seemed to me. His focus, his ability to find those little gems of behavior that made everything absolutely true were a marvel to behold."[9]

Burghoff appeared regularly on TV, making appearances on game shows as well like Buzzer, Match Game, Tattletales, Hollywood Squares, and Showoffs. He also appeared in the film B.S. I Love You, as well as one episode each of The Love Boat and Ellery Queen. His M*A*S*H character Radar O'Reilly appeared on two episodes in the first season of AfterMASH. It was then spun off into W*A*L*T*E*R which aired only once in the Eastern and Central time zones only. Burghoff also appeared in The New Adventures of Wonder Woman episode "The Man Who Wouldn't Tell" in 1978, where he was reunited with his former band member Lynda Carter, who portrayed the title character.

Burghoff is a self-taught amateur wildlife painter who is also qualified to handle injured wildlife in California.[11]

He also worked as a professional jazz drummer, heading the trio The We Three. In the M*A*S*H episode "Showtime", Radar is seen playing a solo on the drums; he was actually performing, and the music was not dubbed.[12]

Burghoff is also the inventor of (and holds a patent on) the "Chum Magic", a fishing tackle invention that attracts fish toward the user's boat.[13][14] Other Burghoff inventions include a toilet seat lifting handle and a new type of fishing pole.[15]

Burghoff is a philatelist.[16] He was asked in 1993 to help select a postal stamp for United States hunters.[11]

Burghoff came out of retirement in 2010 to star in the film Daniel's Lot.[17]

Burghoff was married to Janet Gayle, from 1971 to 1979. They had one child before their divorce. In 1985, he married Elisabeth Bostrom. The couple had two children and divorced in 2005.[3]

Report a problem
Write to Gary Burghoff at FanPal • 2022