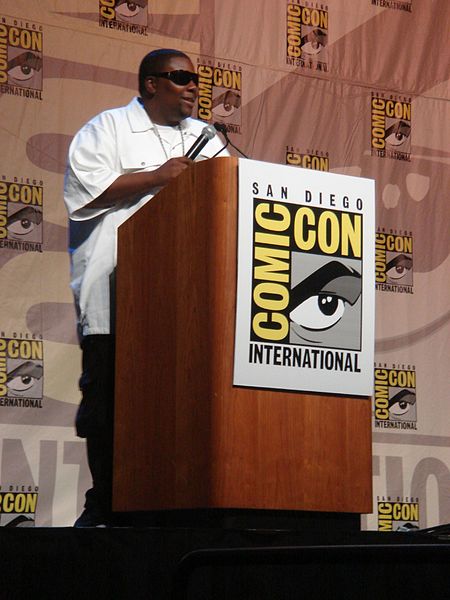 Kenan Thompson (/ˈkiːnən/ born May 10, 1978)[1] is an American actor and comedian. Thompson began his acting career in the early 1990's, and garnered fame as an original cast member of Nickelodeon's sketch comedy series All That.

In his early career, he often collaborated with fellow All That costar Kel Mitchell. In 1996, they began starring in their own sitcom Kenan & Kel (1996-2001). He has been a cast member of the NBC sketch comedy series Saturday Night Live since 2003, and is the longest-tenured cast member in the show's history. Thompson is also known for his roles in The Mighty Ducks franchise, Good Burger, and the title character in the 2004 film Fat Albert.

He has received a Primetime Emmy Award from three nominations,[2] and is ranked at #88 on VH1's 100 Greatest Teen Stars.

Thompson was born and raised in Atlanta, Georgia, to Fletcher and Elizabeth Ann Thompson. He has two siblings, an older brother and a younger sister. He began acting at age 15, appearing in the school play The Gingerbread Duck.[3] He auditioned for a theatre company The Youth Ensemble of Atlanta (YEA).[4] One of his earliest roles was as an entertainment reporter for CNN's "Real News for Kids",[5] and he would go on to star in All That, and Kenan & Kel.[5] While Kenan attended Tri-Cities High School, a Visual and Performing Arts Magnet School in East Point, Georgia, he began filming his first movie, D2: The Mighty Ducks.
Read more...

Kenan has starred in several films including Good Burger, based on the All That sketch of the same title, and Fat Albert, in which he played the title character. He has also had supporting roles in the movies Heavyweights, D2: The Mighty Ducks, D3: The Mighty Ducks, Love Don't Cost a Thing, Barbershop 2: Back in Business, My Boss's Daughter, and Snakes on a Plane. Thompson had a recurring role on The Steve Harvey Show as Junior, with co-star Kel Mitchell.

In 2009, Thompson was a regular voice actor in the Fox cartoon series Sit Down, Shut Up, portraying Sue Sezno, who, as evidenced by her last name, always says no.[6] The series premiered on April 19, 2009,[6] but was canceled after only four episodes due to low ratings and less than favorable reviews. Thompson provided the voice for the LeBron James puppet in Nike's MVP "Most Valuable Puppets" commercials, which were produced to be shown throughout the 2009 NBA Playoffs. Thompson also guest starred on the USA Network TV show Psych in Season 4's "High Top Fade Out" (episode 7). He played an estranged college singing buddy of the character Gus. In 2011, he briefly returned to Nickelodeon, as he guest starred in "iParty with Victorious", a crossover episode of TV sitcoms iCarly and Victorious.

Thompson appeared as a host of sorts of TeenNick's 1990's programming block, The '90s Are All That, appearing in many of the block's early bumpers and hyping material. He would return to the block, now called NickSplat but at the time called The Splat, for All That's 22nd anniversary, with segments filmed at the 2015 New York Comic-Con.[7]

On September 23, 2015, Thompson appeared on The Tonight Show Starring Jimmy Fallon alongside former All That co-star Kel Mitchell in which they reprised their popular Good Burger roles as "Ed" and "Lester Oakes, Construction Worker".

Thompson returned to sketch comedy when he joined the cast of Saturday Night Live in 2003, becoming the first SNL cast member to be born after SNL's premiere in 1975. Thompson was a featured player until 2005 (spanning the 29th and 30th seasons) and was promoted to repertory player at the beginning of season 31 (the 2005-2006 season).

Thompson has been a cast member on SNL for 16 seasons, breaking the record for the longest-tenured cast member in the show's history previously held by Darrell Hammond, who was on the show for 14 seasons. Thompson became the most senior cast member in the 2013-14 season, following the departure of Seth Meyers. He is also the longest-serving African-American cast member, surpassing Tim Meadows, who stayed on the show for ten seasons, and is also the second-oldest current cast member after Leslie Jones (born 1967).[9] Thompson also holds the record for most celebrity impressions performed on the show, performing 129, beating Hammond's previous record of 107.[10]