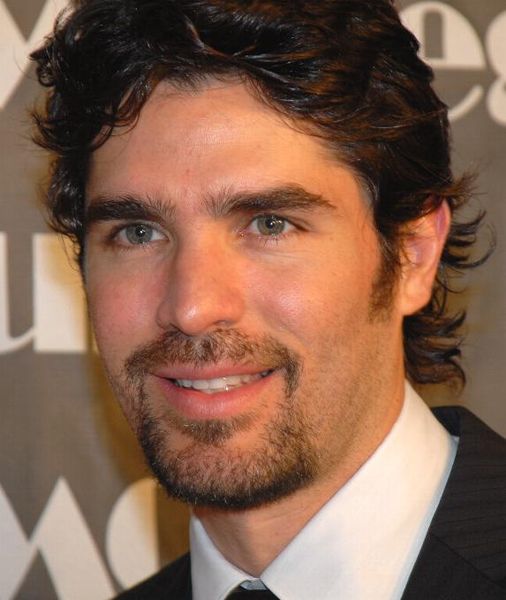 José Eduardo Verástegui Córdoba (born May 21, 1974) is a Mexican actor, model, and singer. He was part of band Kairo and later a solo music career, before he started appearing in Mexican telenovelas and eventually feature films like Chasing Papi, Bella, and Little Boy, the latter two produced by his own production company, Metanoia.

Verástegui was born in Xicoténcatl, Tamaulipas, Mexico. He was raised in a practicing Catholic family.[2] After finding success as a musical entertainer, and then as a soap opera star, he decided to pursue a career in Hollywood. In 2002, before filming commenced on Chasing Papi, Verástegui took voice-coaching lessons to improve his English pronunciation. The coach was a committed Catholic, and in the course of their conversations Verástegui re-discovered his faith and resolved to change his lifestyle. He also declared that he had decided to turn down offers to play roles in films that conflicted with his Catholic beliefs or that insulted his Latino brethren.[3] In an interview with Dave Hartline, the author of The Tide Is Turning Toward Catholicism and published by Catholic Report, he said he was committed to attend Mass daily, praying, reading the Bible, saying the rosary and going to Confession at least once a week. He also said that he first encountered his renewed faith in Scott Hahn's book, Rome Sweet Home that "had a great impact on me and its influences can be seen in a lot of what I do".[4][5]

Verástegui is a pro-life advocate, through the organization Manto de Guadalupe. Verástegui recounts an anecdote about his beliefs: he was doing research for his role in Bella and had gone to an abortion clinic as part of that process. While there, he started talking to a Hispanic couple who were going to the clinic for an abortion. He says that, recognizing him from his telenovela roles on Mexican television, they listened as he described his upcoming role and the plotline of Bella. They reconsidered their decision and went home without going ahead with the abortion. Immediately after their child was born, they called him to tell him the good news and thanking him and asking for his permission to name the child Eduardo after him. He also made a point of meeting "little Eduardo" weeks later.[5][6]

In 2008, he released a long video message denouncing the high rate of abortion in Hispanic communities in the United States and speaking out loudly about alleged targeting of the Hispanic communities with messages supporting abortion by the Barack Obama campaign during the presidential race.[7]

Actively involved in charities, he has established Manto de Guadalupe, a pro-life organization with worldwide outreach and based in Los Angeles and offering a crisis pregnancy center for the underprivileged Latina women.[8]

Verástegui cofounded the production company Metanoia Films (the Greek word for "repentance") with co-founders and partners Alejandro Gomez Monteverde and Leo Severino. The company is based in Beverly Hills, California, and is committed to producing films that touch the consciences and hearts of people. The company released its debut film Bella directed by Alejandro Gomez Monteverde and starring Verástegui. The latest project of the company is Little Boy written by Alejandro Monteverde and Pepe Portillo. Starring Emily Watson, Kevin James, David Henrie, Jacob Salvati, Ben Chaplin, and set in 1945, it tells the story of Pepper, an eight-year-old who does all he can to be reunited with his father, a soldier fighting in World War II and captured by the Japanese. Meanwhile, Pepper has to befriend Hashimoto, a Japanese man living in his town.[9]

as part of Kairo

as part of Kairo