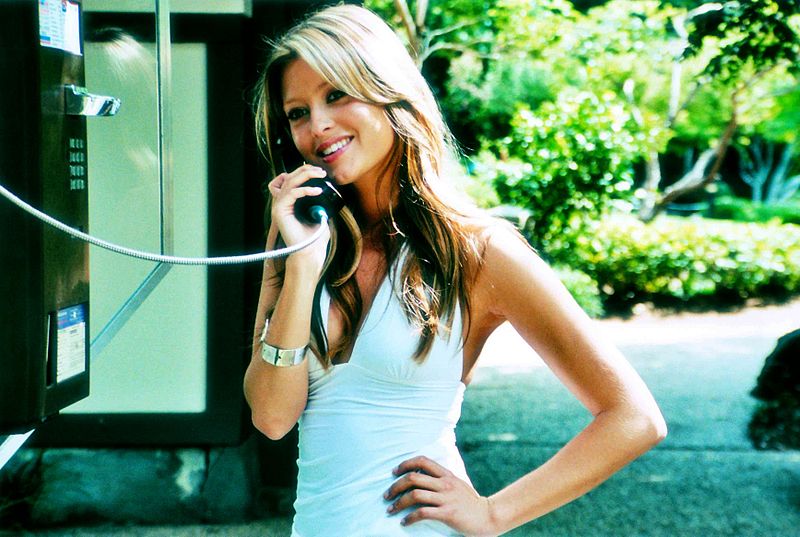 Holly Rachel Candy (née Vukadinović, ; born 11 May 1983), known professionally as Holly Valance, is an Australian actress, singer and model. Valance began her career as Felicity Scully on the Australian soap opera Neighbours. In 2002, she released her first album Footprints which included the single "Kiss Kiss".

Valance was born in Fitzroy, Victoria to a Serb father, Rajko Vukadinović, and an English mother, Rachel (née Stephens) of Spanish descent.[3][4] Her father was a musician, playing the piano, and a model in his younger years in Belgrade.[5][6] Her mother, whose father was a relative of Benny Hill, was a model in the UK.[4][5][6] She has two sisters, Coco and Olympia. The latter is an actress who plays Paige Smith in Neighbours. All three sisters hold dual Australian-British citizenship.[7][8] Valance grew up in Melbourne and moved to the UK when she was 18. After two years in the UK, she moved to Los Angeles, where she spent seven years.[7]
Read more...

As a teenager, in 1999 she was cast in the long-running Australian soap Neighbours as Felicity "Flick" Scully. Valance left the series in 2002 to pursue a music career.[9] Valance's first single as a recording artist was "Kiss Kiss", an English language rewrite of the Turkish singer Tarkan's "Şımarık" (composed by the Turkish "diva" Sezen Aksu), released in 2002. The song entered both the Australian Recording Industry Association and UK Singles Charts charts at No. 1 in April/May 2002. The song had some success in Europe, going top ten in seventeen countries, and became a surprise Number One in Former Yugoslav Republic of Macedonia. The director's cut version of the music video was notable in that Valance appeared to be dancing naked. She revealed that she was topless but also wearing flesh-coloured underwear. The footage was digitally retouched adding strategically placed lighting effects. The song was nominated for four ARIA Music Awards.[10] Valance's next single, "Down Boy" peaked at No. 2 in the UK and at No. 3 in Australia. Her first album, Footprints, was released on 14 October 2002. It peaked in its first week at No. 9 in the UK and No. 15 in Australia. The album's third and final single "Naughty Girl" peaked at No. 3 in Australia and at No. 16 in the UK.

In 2003, the first single "State of Mind" from Valance's second album State of Mind peaked in its first week No. 8 in the UK and at No. 14 in Australia, but the album did not reach the top 50 in either country. Following the legal problems and poor sales from the album State of Mind, Valance was reportedly dropped from her recording company. She denied this stating, "I asked to be released, but Warner refused, so I hung out for a year until the contract expired. We parted on good terms."[11] Valance later confirmed she is no longer interested in recording music, telling Men's Style magazine: "I do something until it's not fun any more and then move on. Music wasn't fun any more."[11]

In 2004, Valance returned to acting, this time in the United States, appearing in episodes of the television series CSI: Miami and Entourage. In 2005, she appeared in an episode of CSI: NY. In 2005 Valance returned to music, albeit briefly, when she appeared on Har Mar Superstar's album The Handler singing on the tracks, "DUI", "Back the Camel Up" and "Body Request".[12] She appeared in Prison Break in 2006 as Nika Volek, a role which she continued to portray in the show's second season. Also in 2006, Valance appeared in the National Lampoon comedy Pledge This!, alongside American socialite Paris Hilton. The same year, she starred in DOA: Dead or Alive, an adaptation of the popular video game Dead or Alive, where she played Christie. In 2007 she appeared in the TV series Shark and Moonlight. In 2008 she had a role in the film Taken alongside Liam Neeson, and appeared in an episode of The CW series Valentine.

In 2009, she appeared in Frankmusik's video for his single "Confusion Girl". She also leaked a track called "Superstar" in 2009. In 2009 Valance played Brenda Snow for the video game Command & Conquer Red Alert 3: Uprising. She also appeared in Scott Caan's film Mercy.[13] Valance took part in the 2011 series of Strictly Come Dancing,[14] where she was paired with the professional winner of series 8, Artem Chigvintsev.[15] Valance and Chigvintsev were eliminated in the semi-final of the competition on 11 December 2011, giving them a fourth-place finish. She also starred in the Miss Marple television episode called "The Pale Horse".

In 2013 Valance was mentor and judge of fashion competition Shopaholic Showdown.[16] In 2015 she starred in the action film Red Herring as Angela.[17] On 7 December 2016, Olympia Valance said that Valance is expected to return to Neighbours in 2018.[18]

After living in Los Angeles for seven years, Valance returned to England in 2009. That summer she had a brief relationship with electropop star Vince Frank (FrankMusik) after appearing in the video for his "Confusion Girl" single.[19] On 29 September 2012, Valance married billionaire English property developer Nick Candy in Beverly Hills, California.[20] In November 2013, Valance gave birth in London to their first child, a daughter, Luka Violet Toni Candy.[21]

In 2003, Valance fired her then-manager Scott Michaelson (who owns Biscayne Partners Pty Ltd) by telephone, 15 months before his contract was due to expire. Biscayne Partners sued Valance Corp., won the case and was awarded damages by the Supreme Court of New South Wales.[22][23] During the trial, Valance's mother claimed Michaelson had been negligent as a manager, which forced her to take over from him.[24] The former Neighbours co-star Kym Valentine also gave evidence that Valance "said she was feeling bad, a bit stressed out, because she was leaving Scott" and that "she said the solicitors for her record company would get her out of the contract and would be faxing him the paper work (from the UK) to do so."[25] In court, Valance denied that she had said this to Valentine, even though she had signed an affidavit stating she had no recollection of the conversation.[26][27]

Justice Clifford Einstein said, "I have given close consideration to the question of whether or not the circumstances presently before the Court which do, it seems to me, show a calculated disregard of the rights of Biscayne as well as a cynical pursuit of benefit".[22] The court subsequently ordered Valance Corp. pay $350,000 to Biscayne Partners Pty. Ltd. Of this amount, $47,264.56 was "from shares Ms Valance and Mr Michaelson had bought together on the London Stock Exchange",[28] though the court did not award in favour of Biscayne getting a percentage of sales of her album, State of Mind.[22][29]

In addition to film and television roles, Valance has also appeared in adverts for Schwarzkopf hair care products and 1800 Reverse. In 2011, Valance appeared in an advert for Foster's Gold bottled beer.[30]